When Elsa Schiaparelli partnered with Salvador Dalí to design fabric and accessories in the 1930s, she radicalized the notion of what clothing could be. Designers have long looked to the visual arts for inspiration, but no artistic movement has had more of an ongoing relationship with—and creative impact on—fashion than the dreamlike world of surrealism. And at a time when it can feel like very little makes sense, its influence is not only still present but more relevant than ever.

The surrealists were a group of artists, poets and intellectuals who sought to overthrow social rules by rejecting rational thought. Their approach was to tap into the subconscious mind, a practice that resulted in nonsensical motifs (the stuff of dreams) featuring lobsters, pipes, body parts and birds—or, in the case of one of Schiaparelli’s most iconic designs, a shoe worn on the head. “Most of my work is concerned with destroying—or at least deconstructing—conventional ideas of beauty, of the generic appeal of the beautiful, glamorous, bourgeois woman,” she once said.

“Surrealism certainly goes hand in hand with a lot of ways of reimagining art but also with dress in terms of abstraction,” says Alison Matthews David, associate professor and graduate-program director at Toronto’s Ryerson University’s School of Fashion, of the movement’s influence on apparel. “There’s this idea of radically changing dress and making it avant-garde to reflect social and artistic movements.” To document this crossover, Vogue commissioned artists like Dalí to make “photo paintings” depicting fashion’s relationship with the movement during the 1930s. 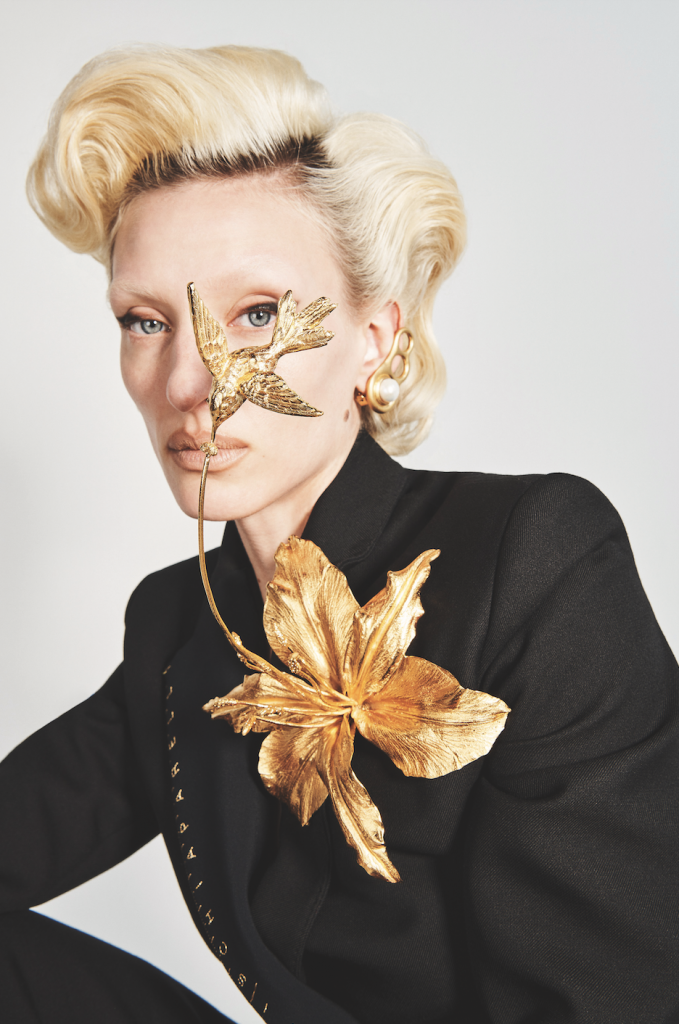 Over the past century or so, there has been no shortage of designers who’ve applied surrealist principles to dramatic effect. Comme des Garçons’ Rei Kawakubo is known for crafting mind boggling sculptural forms, while Thierry Mugler made gowns that morphed into motorcycles and butterflies and Hussein Chalayan created furniture that transformed into gowns. Alexander McQueen modified the appearance of the body with his bumster trousers before Montreal’s Matières Fécales truly radicalized the human form, most famously with its “skin” boots. Maison Margiela’s conceptual creations have included everything from “wig coats” to a waistcoat made of shards of porcelain intricately stitched together, while Jean Paul Gaultier dubbed his 2006 collection “Les Surréalistes,” paying homage to Schiaparelli with his version of her skeleton dress. Jeremy Scott is no stranger to subverting mass imagery, as he did with his McDonald’s-inspired pieces at Moschino, while Miuccia Prada and Kenzo have both incorporated surrealist motifs like lips and eyes. Many of these designs have earned acclaim beyond the runway and been featured in exhibitions at top museums around the world, including the Metropolitan Museum of Art and the Montreal Museum of Fine Arts.

“If people want to make a visual statement, [they] want to look to surrealism in terms of these arresting, eye-catching ways 1997of playing with the body and dress,” says Matthews David. This season, surrealist influences resulted in the illusion of gemstones at Loewe, poetic feathers at Erdem and deconstructed puffer jackets at Marni. Dries Van Noten, who’s often inspired by the movement, incorporated hand motifs—a surrealist signature—while Libertine looked to Alice in Wonderland for inspiration and added trompe l’oeil pockets to a trench coat. At Schiaparelli, which was revived in 2013 and is currently led by Daniel Roseberry, denim jackets were designed to be worn backwards and tops featured the 3-D shapes of breasts and Hulk-like abs.

For Toronto-based designer Dorian Who, an encounter with René Magritte’s 1929 painting The False Mirror in Brussels was a turning point in her own art. “It was a complete change in my life [that led] to me seeing the world through a window that this painting opened for me,” she says. “I started to look at things differently.” Tapping into her subconscious is now part of her creative process, which she says helps her to better communicate her message through her designs, imagery and creative collaborations. (The lookbook for her most recent collection features a distinctly Magrittean blue sky.) “I feel like this uncensored thought process helps me connect to more people,” she says. How surreal.

Read more:
Conquering the Cosmos: A Retrospective of 1960s Fashion
Let’s Go Back to School: Preppy Fashion Is in Style Again
Are NFTs the Future of Fashion?