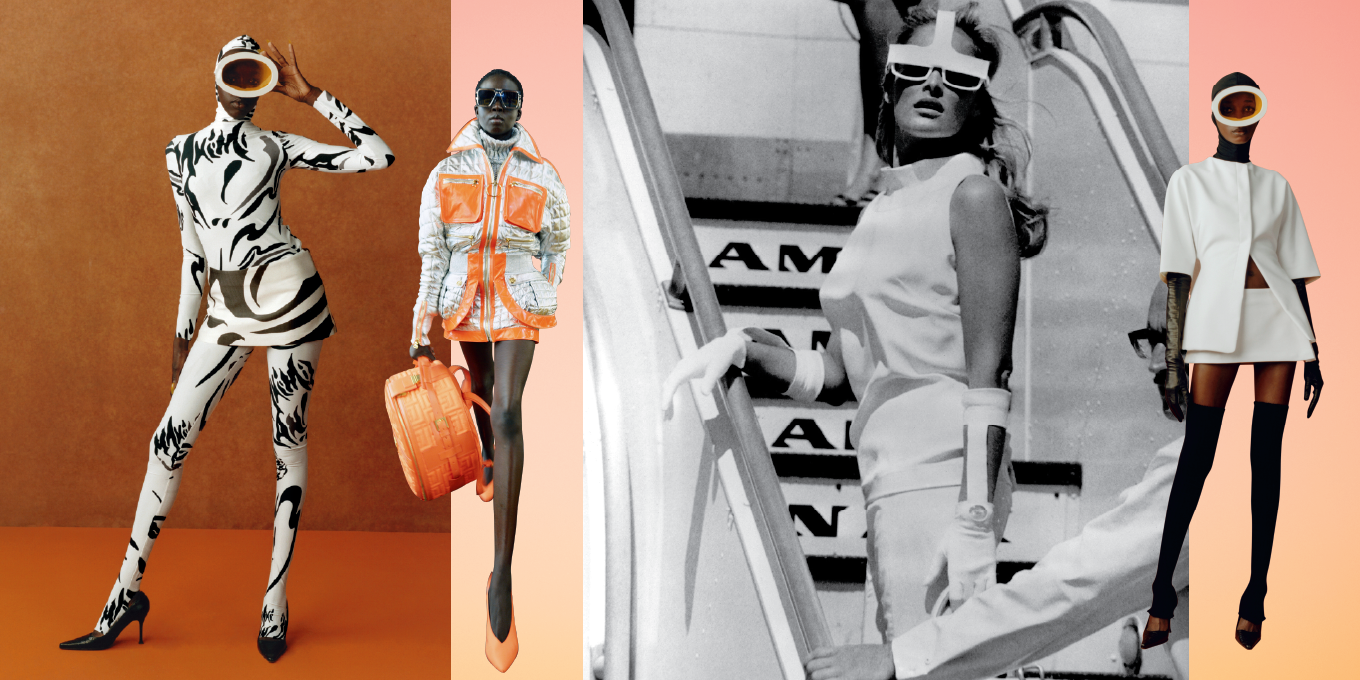 In July, a Virgin Galactic shuttle and a Blue Origin shuttle left our atmosphere for a few minutes. On board were billionaires Richard Branson and Jeff Bezos, respectively, who want to make space tourism a norm for those who are willing to shell out for it. Will the cosmos become the destination of choice for the fashionable jet set—the same crowd that flocks to Gstaad and St. Barts—when they’re looking for the ultimate novelty experience?

This fascination with outer space isn’t new: The fashion world has been drawing inspiration from the universe at least since the 1960s. During the Cold War, the U.S. and the U.S.S.R. fought a technological battle against the backdrop of the space race until Apollo 11 took Americans to the moon and Neil Armstrong became the first person to walk its surface on July 21, 1969. Designers at the time were highly influenced by space exploration, the possibilities of which they explored with futuristic wardrobes.

The figurehead of this “space age” fashion, former civil engineer André Courrèges, designed space-age jumpsuits and PVC clothing throughout the 1960s. In the same vein, Pierre Cardin created vinyl miniskirts, plexiglass helmets and metallic waders and Paco Rabanne released his 1966 collection, Twelve Unwearable Dresses—unwearable because some of them were made from metal plates or Rhodoid discs and weighed up to nine kilograms. These pieces became the eccentric couturier’s trademark, and he dressed his muses—including Françoise Hardy, Audrey Hepburn and Jane Fonda—in them. (He also designed the costumes for Barbarella, the science-fiction movie starring Fonda as an adventurous astronaut.) In 1969, Italy’s Giancarlo Zanatta created the first moon boot, a UFO-style winter boot inspired by those worn by the Apollo 11 astronauts and later remade by Jeremy Scott, Fendi and Dior.

Over the decades, designers—such as Thierry Mugler in the ’80s and Alexander McQueen in the ’90s—continued to use outer space as inspiration. Were they driven by the desire to predict or prepare for the future or to explore a universe that has no rules or limits? When Chanel installed an (almost) life-sized rocket ship under the glass roof of the Grand Palais for its fall/winter 2017/2018 show with models parading in retro outfits reminiscent of Courrèges’ futuristic style—we were nothing short of star-struck.

For fall/winter 2021/2022, some designers created intergalactic wardrobes that are at the height of the trend, like Balmain’s utilitarian jackets and metallic jumpsuits and Maximilian’s nod to the ’60s futurists. Before the Louis Vuitton show, creative director Nicolas Ghesquière talked about his need to invent an “extra ordinary journey” since some borders were still closed due to the pandemic. For this unusual voyage, the designer created protective capes and flashy coats that look like they could double as survival blankets. But it is Balenciaga’s conquest of space that is most obvious: Designer Demna Gvasalia collaborated with NASA to create, among other pieces, a parka that will thrill both budding cosmonauts and fashionistas keen to reach the outer atmospheres of style.

Read more:
Let’s Go Back to School: Preppy Fashion Is in Style Again
The Sailor Shirt Is a French Girl Essential That’ll Never Go Out of Style
Punk Rock Fashion Is Officially Back