The designer at the helm of J. Crew's womenswear on his latest collaboration and what's next for the brand. 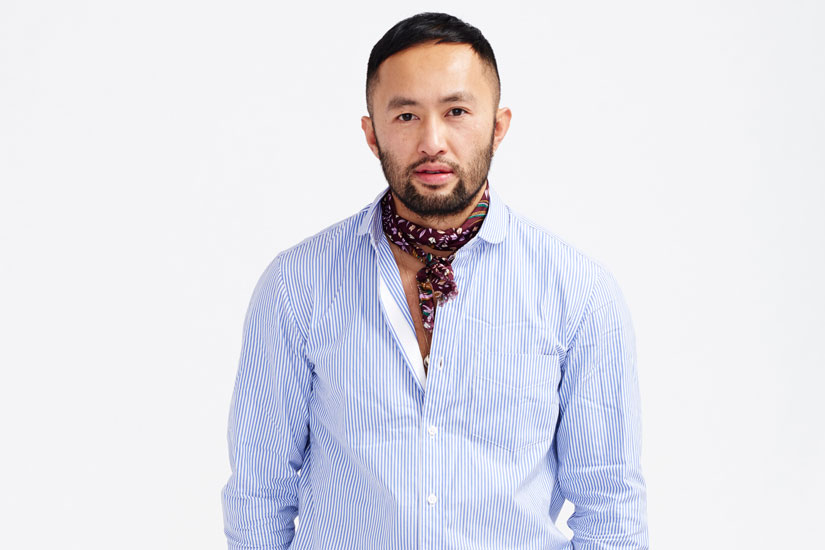 Somsack Sikhounmuong is reliving his childhood. Seated in the shadow of a giant whale skeleton at the Royal Ontario Museum’s newest exhibit, the head designer for J.Crew is experiencing a bit of déjà vu. “The last time I was here, it was probably with a lunch box,” says Sikhounmuong, who is in town to promote his charitable design venture with the ROM’s Blue Whale Project.

Growing up in Oshawa the two things that excited Sikhounmuong the most were field trips to the museum and whales. This latest collaboration, a capsule collection of Breton tops, tote bags and bandanas with whale motifs hand-painted by the designer, couldn’t be more fitting. The self-professed “whale nerd” had no hesitations about partnering with the museum on a charitable design venture where fifty percent of the proceeds will go towards research of the threatened species.

As for what’s next for J. Crew, Sikhounmuong is focusing on sticking to what the brand has always stood for—classic pieces. “Whether it’s a roll-neck sweater or a rugby t-shirt, we update them and make them work for today,” he says. “Back in the ’80s our rugby t-shirt was worn with a pair of jeans or chinos, but this season we showed it with a big duchess satin ball skirt, a blazer and heels.”

When asked if his Canadian childhood has influenced his designs, Sikhounmuong isn’t quite sure, but the answer emerges once the designer discusses the inspiration for his latest collection. “Being Canadian, I’m very partial to the monarchy, so we looked at old photos of Queen Elizabeth and Prince Phillip,” he says. “They were dancing, and she was in this beautiful silvery dress, and he was in a tartan kilt. The traditional versus the modern, light and pretty elements were a huge inspiration.”

Now that we’re finally getting a taste of spring’s elusive warmth, the designer is dreaming of a wardrobe to match. “I love spring. I think it’s a great time to shed your winter seriousness,” he says. “It’s about having fun, being feminine, and just toying with a couple of new proportions—having things be a little easier.”

As a designer at the helm of a major brand, Sikhounmuong doesn’t feel constricted by the demands of his job. “When we look at colours and patterns, it always has to go through a J. Crew lens.  If it doesn’t feel right in my gut, then just falls away to the side, or it gets edited. It’s very important with so many different brands out there to stay true to [my] vision.”

Life at J. Crew hasn’t been without its challenges—from weathering the whims of consumer demands to navigating an ever-changing retail landscape— but Sikhounmuong savours the job’s most rewarding moments. “As a designer, nothing makes me happier than to see someone wearing what we’ve worked so hard to design,” he says. “Being in New York, it happens a lot. I love going to the dry cleaners and being able to see J. Crew pieces hanging there, being used and loved and worn. I think that’s the top moment for me.”