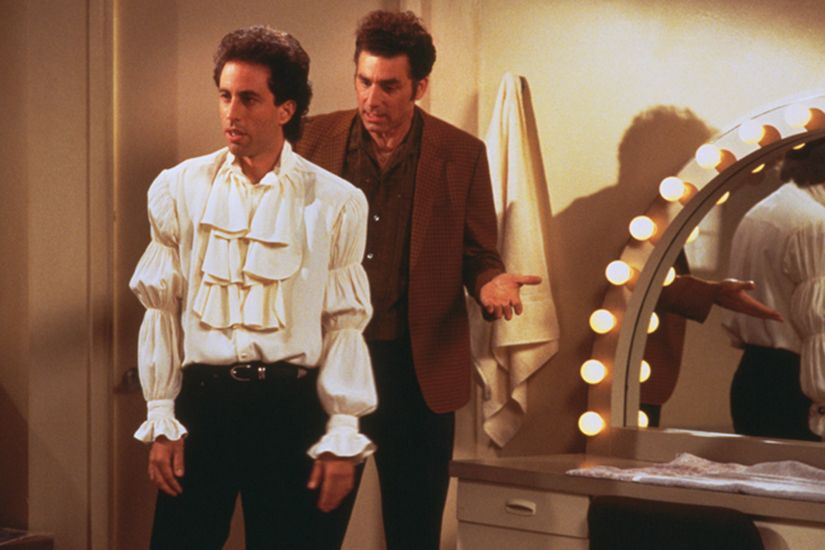 This season’s fur coats are real and they’re spectacular. Before Fendi, Saint Laurent and Libertine showed fur on the fall runways, Kramer had us saying, “You are soooo good-looking.”

This jacket is back and puffier than ever. Seen at Tory Burch, Balenciaga and Acne Studios, models were channeling their inner George Costanza à la season 5, The Dinner Party. “It’s Gore-Tex!”

All white is no longer reserved just for karate classes. Take your cues from Kramer, Hermés and Stella McCartney and embrace white as your fall colour staple.

Sweet fancy Moses! The skirt suit is back. It made its comeback at Oscar de la Renta, Alexander Wang and Versace. We’ll never be able to un-see the skirt suit’s iconic moment when Elaine revealed her dancing to the world. “It’s more like a full body dry heave set to music.”

One of fall’s biggest trends, George was first seen rocking the Varsity jacket in season 8 after Elaine called him a bad seed. “He’s one of the worst seed I’ve ever seen.”

Yea, that’s right, racer-inspired jackets took the front seat at Louis Vuitton, Chloé and Rag & Bone. Can you pull it off? Puddy says, “You have a question, you ask the eight ball.”

“I would drape myself in velvet if it were socially acceptable.” Finally it is, thanks to Ralph Lauren, Stella McCartney and Etro.

Perhaps the most iconic Seinfeld fashion moment ever, the low-talker was onto something. Featured at Balmain, Giambattista Valli and Aganovich, their puffy shirts had us all wanting to be pirates.