Once upon a time: The allure of the fashion fairy tale

Exploring the dark side of our favourite fairy tales on the runway this season. 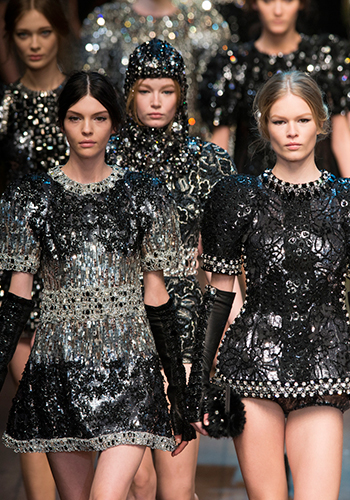 Like human nature, fashion is ruled by two opposing forces: the Apollonian rationality of an Akris black-and-grey-checked trouser ensemble and the dark Dionysian romance of an Alexander McQueen cape constructed wholly of feathers. The first is what you would wear to a presentation; the second is what you would wear galloping off into the sunset on an Arabian horse in the desert. Which would you choose?

The collections this fall offer a pitched battle between these two world views. Against the minimal chic of Céline, the irony of Chanel and the cynicism of Saint Laurent lies the fairy-tale enchantment of Dolce & Gabbana, Valentino, Alice and Olivia, John Rocha and, in darker, more brooding form, Alexander McQueen.

“For me, it started with these amazing French pop-up books by Benjamin Lacombe that are all adult illustrations with a twist on a variety of fairy tales,” says Stacey Bendet, the designer of New York label Alice and Olivia. “I fell totally in love with a beautiful dark-haired girl with blue butterfly wings.” Bendet translated her inspiration into a stage set of dark, misty woods, eerily perfect for a Gretel-like dirndl dress and blue Cinderella gown. Elsewhere, woodland creatures proliferated: felt owl and fox appliqués at Dolce & Gabbana and embroidered sparrows at Alberta Ferretti. The cape—the antithesis of the tailored jacket and the sartorial clarion call of the romantic soul—appeared everywhere. At John Rocha, black ruffles were shaped into hooded capelets, and at Alexander McQueen, a cape of arctic raccoon transformed into the Big Bad Wolf.

The German poet Schiller wrote, “Deeper meaning resides in the fairy tales told to me in my childhood than in the truth that is taught by life.” Fairy tales teach us that strange things lurk in the forest, witches live in gingerbread houses, shiny red apples kill and terrible beasts guard troublemaking roses. That rose, bloody in colour and overwhelming in size, appeared on maiden gowns at Valentino and on sculptural dresses and coats at Giambattista Valli. Its Alice in Wonderland proportions hint at an upside-down world—the topsy-turviness of talking cats, peasants who become princesses and straw that can be spun into gold. All of it cloaks a utopian message: The poor can become rich and the downtrodden powerful. To the down-and-out, fairy tales are better than anything communism, the Sermon on the Mount or a lottery ticket can offer. As Jack Zipes writes in Breaking the Magical Spell: Radical Theories of Folk & Fairy Tales, fairy tales “confront the injustices and contradictions of so-called real worlds…and can be equated to the wish-fulfillment and utopian projections of the people.”

GALLERY: The best FALL BAGS under $100

It’s doubtful that Stefano Gabbana and Domenico Dolce were embroidering revolutionary messages to the masses into their brocade coats, but the dark-forested aesthetic of fairy tales is a perennial draw for the stylish. The stories are at once familiar and comfortable, dark and edgy—perfect fashion fodder. “There is a psychic immediacy to fairy­tale characters,” explains Dominic Teja Sidhu, a New York­-based curator who has worked on fairy-­tale-­influenced exhibitions, photo shoots and children’s books over the years. “They become your own, and you can create with them. A fairy­tale character can walk into your creative subconscious and be a very real muse.” For Teja Sidhu, that muse is Cinderella, the heroine of the classic rags­to­riches tale of goodness conquering all. In the fall/winter 2014 fashion world, more dramatic inspirations reigned. At Alexander McQueen, Sarah Burton cited the Beast in Beauty and the Beast (“a wild, beautiful fairy tale”) as an influence, while Alice and Olivia’s Bendet name­checked Angelina Jolie’s recent silver­screen villainess: “The whole feel was supposed to be a dark, sexy twist on fairy­tale themes, like Maleficent.”

Both fall fashion and the forthcoming crop of cinematic fairy tales are for grown­ups (too), instead of the wholesome toddler fare that Disney has dished out for decades. These tales hearken back to the dark, intriguing originals of the Brothers Grimm and Charles Perrault. Take Cate Blanchett as Cinderella’s evil stepmother in the upcoming Kenneth Branagh remake or the casting of transgender model Andreja Pejic as Ariel’s sister in Sofia Coppola’s hotly anticipated The Little Mermaid—a hint that Coppola’s film will not be a straightforward retelling of the Hans Christian Andersen classic.

After all, transformation, the linchpin of most fairy tales, is a theme that is particularly consonant with fashion. It’s what we seek every time we experiment with a hat, shoes or knee socks—or Maleficent’s terribly chic horned reptilian turbans, a twisted sartorial representation of a good girl gone bad.

“This is a really volatile time to live,” says Teja Sidhu, “and the essence of fairy tales is dramatic and creative. All fairy tales are about rebirth, crisis and transformation, with an element of fear but always a happy ending—even if there are always casualties.” Dark and edgy may be how we prefer them right now, but we still retreat to fairy tales because they give us the hit we want: the charwoman who turns into a princess; the beast who turns into a prince. Fairy tales give us what we crave right now: that we all live happily ever after.