From ultra-luxe cocktails to celeb sightings, Chanel's Resort 2015 show in Dubai was a fantastical escape worthy of the French house, and we were along for the (boat) ride. 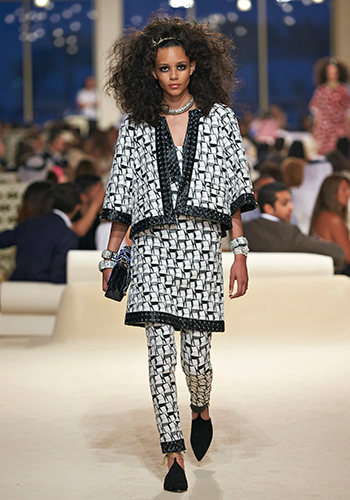 As the global authority on bigger, better, more, Dubai eats luxury hyperbole for breakfast. Take the Dubai Mall, which has more than 1,200 stores, or the city’s 830-metre Burj Khalifa, the tallest building in the world. Then there’s the Burj Al Arab hotel, a self-billed seven-star hotel on a man-made island, which offers an $8,200 drink: Served in a gold glass, it features passion-fruit-scented sugar, 55-year-old Scotch and more than a dash of nerve.

MUST-READ: How to take care of YOUR HEELS

Dubai, in short, is surreal enough. But when you add Chanel, the world’s biggest fashion brand, and its legendary Cruise show to the Emirati city, the collision is bound to  be heady—a luxury cocktail stirred,  a little shaken and topping out well  above $8,200.

The first clue to the impending extravaganza occurred at the Dubai airport, where the customs officers wore white head scarves embroidered with faint double Cs. A sleepy Dakota Fanning stood in line, as did Vanessa Paradis, with her newly cropped hair and French-singer boyfriend Benjamin Biolay. The celebrities were among the 1,000 invited guests to Chanel’s Cruise 2015 runway show and star-studded after-party. Rumours swirled like desert dust: Chanel had taken over a man-made island; Janelle Monáe would perform; Tilda Swinton was en route. All of them were true.

“The big question is, Why come to Dubai?” asked Bruno Pavlovsky, Chanel’s president of fashion, the morning of the show. “In 2013, we held the Cruise show in Singapore, and it was a first step into the new world. Dubai has the same kind of spirit. We thought perhaps this location— with its weather, its tourism—could be the new Riviera.”

Dubai may not have the halcyon Fitzgeraldian glamour of Cannes or Antibes, but it certainly has the money— it accounts for 30 percent of the Middle East’s luxury market—and the momentum. Photographs from just 20 years ago depict a desert landscape bisected by a lone highway; today, Dubai is a metastasizing metropolis of multi-lane highways flanked by hotels, cranes and four-storey billboards advertising Wendy’s Portabella burger. Chanel’s task was to create a spectacle that captured the city’s ultra-modern quality in all its seductive strangeness. As Pavlovsky put it, “We wanted to do something you could only do in Dubai.”

GALLERY: The craziest FASHION FEUDS of all time

The night of the show, the journey began by abra, a traditional wooden boat, from the shore to an island, which until eight weeks previously had neither electricity nor running water. Now it had a massive metal hangar with a lattice made of interlocking Cs. Candles in the sand lit the path to the structure, past Bedouin-style tents stocked with hookahs, while gentlemen offered guests coffee served in delicate silver cups. Clients in hijabs and red lipstick posed for street-style pix with their Chanel 2.55s.

The collection itself was a knockout: an East-meets-West sartorial mix of textural tweed suits, harem pants and gorgeous patterned dresses and coats. “It was exactly what I hoped it would be: a Marisa Berenson mash-up,” said Tilda Swinton on the sand after the show. Torchlight illuminated the skyline, including the coveted real estate on Palm Jumeirah—the man-made islands created in the shape of a palm tree—which is almost twice as large as Central Park.

Later, Karl Lagerfeld and Paradis sat together on a raised structure, bobbing their heads as Monáe sang “ABC” by the Jackson 5 and mega-models Grace Mahary and Lindsey Wixson busted a move on the dance floor. Outside, the first guests lined up to catch an abra back to the mainland, drifting from the lovely fashion bubble into something slicker and grittier: a consumerist Shangri-La rising in the desert, its hour come round at last.

READ MORE:
The best fashion quotes of all time
The most wearable looks from the Spring 2015 runway
10 street style stars you need to know