We chatted with the fashion icon about individuality, Italian food and New Year's resolutions. 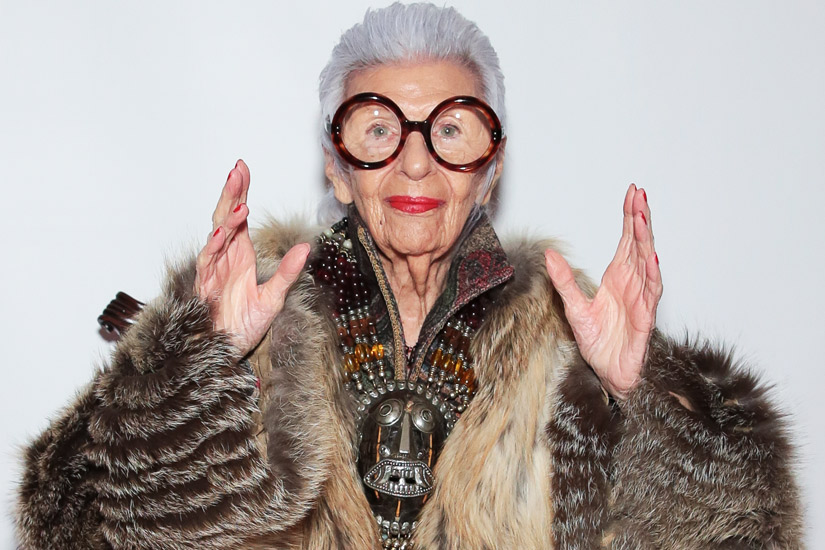 On a late-fall day in Toronto, Iris Apfel, dressed in a shaggy multicoloured fur and the world’s widest cashmere trousers, looks over the rims of her saucer-size glasses and fixes her gaze on a nearby group. “What are you doing over there, boozin’?” she asks the publicists and photographers gathered around a table. It’s this matter-of-fact manner, coupled with her inimitable style, that has won over countless fans and turned Apfel into a champion of individualism. For the record, Apfel is drinking herbal tea. And if you ever have the pleasure of hosting her for an afternoon chat, know this: The 95-year-old businesswoman/interior designer/famed maximalist likes the water piping hot and won’t hesitate to tell you if it’s anything shy of scalding. Apfel, in town with Swarovski as a friend of the brand, shares some of that unfettered wisdom over a cup of 100-degree camomile.

ON BEING A FASHION ICON

“I think it’s funny. I’m not doing anything different from what I did 70 years ago, and now everybody is raving. I don’t talk about my style, because I don’t know exactly what it is; other people can define it. I just do what feels natural to me.”

“People think I wear a lot of stuff, but I don’t think I overdo it. I know when to stop. I don’t wear a set number of bracelets; sometimes I’ll wear just one. It depends on my mood and which noise I want to make that day.”

“I like them all. Everything had something good and something bad. The late ’50s and the late ’80s were the glory days of American fashion.”

“Norman Norell, James Galanos, Gianfranco Ferré and Geoffrey Beene. Dries Van Noten is terrific, and he’s a very good friend. I get a huge bar of chocolate from him every Christmas.”

“Individuality! Although, if you’ve got the combination, that’s fabulous. I’d rather be an individual. What’s that old saying? ‘Fashion you can buy, but style you must possess.’ Good taste is not too difficult to learn if you put your mind to it.”

“I wouldn’t wear the same thing to an interview as I would wear to a disco, but these days people don’t seem to know the difference.”

“Some people look in the mirror and see a celebrity or an idealized version of who they’d like to be instead of facing the truth. Learning who you are is not always the simplest or most pleasant project, but you’ll be doing yourself a big favour. It takes time and effort, like with any other craft.”

“I’m looking forward to dinner [at Buca]. I love Italian food, and they told me that they have burrata pizza, which I can’t wait to try. I love burrata.”

“I have the same resolution every year: to get organized. It never happens!”