5 ways to capture the elusive style of French women. 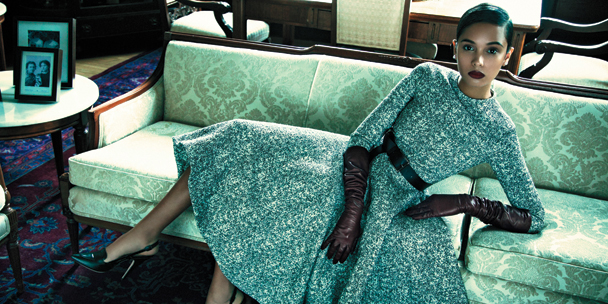 There’s something so universally compelling about the style of French women that it’s only natural to assume it to be an innate national characteristic bestowed on every French female, and not a product of carefully considered personal, sartorial and social choices. And it’s evolution from Jeanne Moreau and Catherine Deneuve in the 50s to the modern style of Charlotte Gainsburg and Marion Cotillard (and Moreau and Deneuve encore) is all the proof we need.

“As a French person, it’s not always easy to see what other cultures think of us,” says Caroline Phely, a Parisian expat and co-owner of Canon Blanc, a French boutique in Toronto’s Queen West neighbourhood. “But I would say that one important thing that particularly all women say to their daughters—I’ve heard it from my mother and many times from other women—is that the way you dress is very important in every aspect of your life.” This includes what you wear to work and all off-duty ventures, she explains.

We asked Phely for her insight on the reason behind the allure of the French woman—and how to capture her look right here at home.

French women style: Don your Sunday best—everyday
The concept of wearing your Sunday best is a 24/7 mantra in France. “It’s very important to always not only be dressed appropriately, but to have your hair done and your makeup on— but not too much,” says Phely. “The saying that all women tell their daughters is that ‘you always have to be dressed up because when you go out onto the streets, you never know who you are going to meet’.” And this stranger casting a watchful eye on your all-pink outfit could be a potential suitor or employer—or worse, that always-stylish friend whom you don’t want to spot you in sweatpants.

French women style: No casual Fridays
We’re going there: “People in a way are always judging us on the way we are dressed,” admits Phely (though we secretly suspected this all along). “The major difference between Europe and North America is that in Europe, because you’re expected to dress in a certain way, people judge you by the way you’re dressed even when you don’t realize it.” Say, the quintessential snooty salesperson in an Amsterdam boutique who scoffs at yoga pants-wearing tourists. “There is an unconscious social pressure to always look your best,” she explains. “That’s the main difference and that explains a lot of the French elegance.”

French women style: Dress elegantly but modestly
The allure of the French woman—her unmistakable poise and put-together presence—seems unattainable if only for the fact that it appears impossibly effortless. “I don’t think it is!” Phely protests with a laugh. “We actually put a lot of thought into it. But at the same time we have to look humble.” French women, she explains, invest in subtle but elegant details—cuts, fabrics and texture— when putting together an outfit. “There’s always something to it,” she says. “Maybe because of our socialist background, its not considered proper to show that you have money.”

Modesty in French style is key. “As a woman, it’s frowned upon to dress in very tight-fitting clothes. You have to appear humble and dress in a humble way. ‘Don’t think too much of yourself,’ that’s the spirit behind it.”

French women style: Mix high and low pieces
So what’s the secret to their classic style? “A lot of the time I find that accessories make the look for the French woman,” says Phely, who will pair basics from H&M with designs from upcoming Parisian labels and luxury brands in one outfit. “We don’t dress in all Louis Vuitton and we never make a look with all the pieces from H&M.” That’s what keeps the look interesting—layering a mix of high and low pieces and accessories (hats, jewellery, cardigans and a cool bag). “It’s the addition of all these pieces that really stands out and takes this look to a new level.”

French women style: Wear French labels, bien sûr
There are two distinct features about young French designers (labels like Charlotte Sometime and Elsa Esturgie, which are carried in the Toronto boutique): the ability of their designs to easily transition from day to night and their Made-in-France ethos. “A lot of young designers have actually started brands with the idea that everything they do has to be produced in France or locally,” says Phely. “And as a result, it translates into the comeback of 1950s and 1960s cuts—a sort of Jules et Jim, La Nouvelle Vague.”

The idea of French women proudly supporting national designers only fuels the presence of French style—and our desire to capture it. “It’s kind of going back to it roots,” she says. Which, coincidentally, is exactly where we would like to begin.