ELLE Canada sits down with a man of luxury and mystery to discuss life, inspiration and what fashion really means. 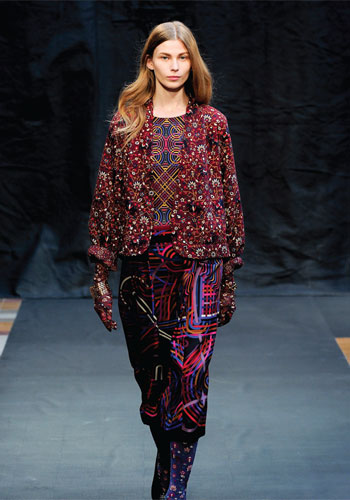 For a designer of his stature, Christophe Lemaire has a miraculously modest digital footprint. Before I chatted with the Hermès designer last fall in Paris – after his third runway show with the house – I quickly Googled his name.

I found mostly positive reviews but no candid bios – just this quick sketch: He interned at Yves Saint Laurent, was a new-wave-loving DJ, launched his own women’s line in 1991, followed by a men’s line in 1995, and worked at Lacoste for 10 years.

In fact, I was able to find out more about a French jockey who has the same name than I could about Lemaire. "Really?" he said, laughing, in what turned out to be one of the rare moments when his genteel reserve was lifted. "Yes, it’s true," I replied, adding that this jockey also has the curious distinction of working for the Aga Khan.

"Hmm…well, I never dreamed of being super-famous," continued Lemaire. "There’s this French expression, Pour vivre heureux, vivons cachés, which means to be happy is to be hidden. That doesn’t mean I don’t care about being recognized for my work. I do – I’m very sensitive to what critics say and I’m happy when I get good reviews – but I don’t court attention. I’m skeptical of it."

It was a few days after his show at L’École nationale supérieure des Beaux-Arts, and the 47-year-old designer looked both relieved and exhausted. Lemaire, who was wearily slouched in the chair in his office, was wearing a brown tweed suit and a stylishly rumpled white shirt.

I remember thinking that he had a kind and curious face – like William H. Macy – but there was a melancholic quality to his movements and expressions.

"Right after, you’re still running on adrenalin," he replied, when I asked what he did after the show. "It’s the day after when you think about everything; you’re a bit anxious about how it is perceived. You deliver six months of work – and a vision – and of course it doesn’t belong to you anymore.

My girlfriend is kind of a geek, so she checks the tweets and makes a selection for me. She doesn’t hide the bad comments, but, luckily enough, we didn’t have so many nasty reviews."

He’s being modest. Tim Blanks from
Style.com said the collection "moved with serene confidence through a shadow land between mens- and womenswear."

Suzy Menkes – whom Lemaire clearly admires – said his "gaucho/sloucho look did justice to the brand’s mantra as a house of true luxury." She later added that the designer seemed less sure with pattern that perhaps he was "too in awe of the house’s heritage to make print sing."

"I think her review was pretty good," said Lemaire. "Suzy loves Hermès scarves. She’s very attached to this part of the Hermès DNA. Again, I can’t please everybody, but in a way I think she’s right. I love print. I just thought we had shown enough, but she wants more!"

VIDEO: How to TIE a Hermès SCARF

The printed pieces – which were a mix of archival and newly developed designs – closed the show. They were a Russian – and Persian – influenced folkloric counterpoint to the opening outfits, which were based on manly gaucho styles from Argentina.

In both geographic and stylistic extremes, Lemaire craftily expressed Hermès’ signature design codes. While it wasn’t an entirely literal interpretation, there was no mistaking the gaucho references in the knit serapes, baggy leather pants tucked into boots and wide-brimmed hats.

"I have always been fascinated by the gaucho look – it’s dignified but a bit wild," said Lemaire. "Everything I want to say about the Hermès woman is there. I do believe that a strict, rigorous, dignified look on a woman makes her very attractive. Sometimes it brings out her femininity."

I asked Lemaire if, for inspiration, he had read the epic gaucho poem "El Gaucho Martín Fierro." (It’s not like I knew of the 1872 classic-but when my Google search on Lemaire fell short, I tumbled into the Internet rabbit hole researching gaucho influences.) "I love poetry, but, no, I haven’t read that one," he replied, looking somewhat amused – or perhaps puzzled – by my query.

"I try to understand references, but I also like to mix influences. This collection actually started with a very Parisian mood. I was looking at ’70s images of the city, Serge Gainsbourg and Jane Birkin."

He then – as he often did – quietly listed one – or two-word reference points. "Brigitte Bardot, 1968. Black leather. Paris. Strict. Melancholic. Then the gaucho woman came into my mind and she went to Asia, Kazakhstan
and Persia!"

Like his mythical muse, Lemaire is also an adventurer. After a few years without taking a real break, he set off on a month-long journey last year. First he travelled from Moscow to Mongolia on the Trans-Siberian Railway, and then he set off for Shanghai, Beijing and finally Japan.

"My love for Asia has been with me for a long time," he explained. "There’s something about the Asian aesthetic and philosophy that I have always loved. It’s a very feminine culture. It’s nuanced and sensitive, but it can be very rigorous. What I love is their desire to capture moments. Something ephemeral. Something poetic. I think the beauty of life is about poetry. Today, we move so quickly. We lose the richness of life – its poetry."

Lemaire is the fifth designer in the fashion house’s 175-year history. He joined Hermès when Jean Paul Gaultier left in 2010 after seven years with the company.

ARTICLE: Fashion DESIGNERS to watch in 2013

While he appreciates the work of Gaultier and Eric Bergère, who was there for nine years, Lemaire said that he’d been most influenced by Martin Margiela, the minimalist and modernist designer who was with Hermès from 1997 to 2003. I asked him how he’d like his turn at the helm to be remembered, but he was too hesitant to speculate.

"For me it’s not about trying to impress or say ‘Look what I’ve done; see how smart I am.’ It’s more about trying to be honest and right," he said. "I’m interested in the intimate relationship we have with clothes, not the spectacular side of fashion." Then I asked him to tell me one thing about himself that few people – except his girlfriend – know.

"I’m very much a homebody," he replied.

"I suspected that about you," I said, laughing. "What would surprise me?"

10 things about Lemaire that you won’t find on Google

1. His idea of perfect happiness "Love."

2. What historical figure he’d like to be "Man Ray – he had a super-exciting life."

3. His fave fictional character "Des Esseintes, from À rebours [by French author Joris-Karl Huysmans]. It’s a cult novel from the end of the 19th century about a man obsessed with the illusion of creating his own world."

4. The greatest influence on his life "My girlfriend. We’ve been together six years."

5. The one thing/person he would bring with him to the afterlife "My girlfriend."

6. What title he would choose for his autobiography "I would never write a memoir!"

7. One song he knows by heart "I’m very bad with lyrics, but I would try to sing dodgy French music. I love Charles Aznavour."

10. Finish this sentence: People think that I’m…, but I’m… "People think that I don’t like fashion – I’ve read that – but I love fashion. I think it’s because I love it so much I’m always looking for something a little deeper in fashion than just an image."