At Toronto Fashion Week, UNTTLD was a standout

On the heels of a CAFA nomination, the Montreal-based womenswear brand showed a confident, romantic collection full of pieces any woman would want in her wardrobe. 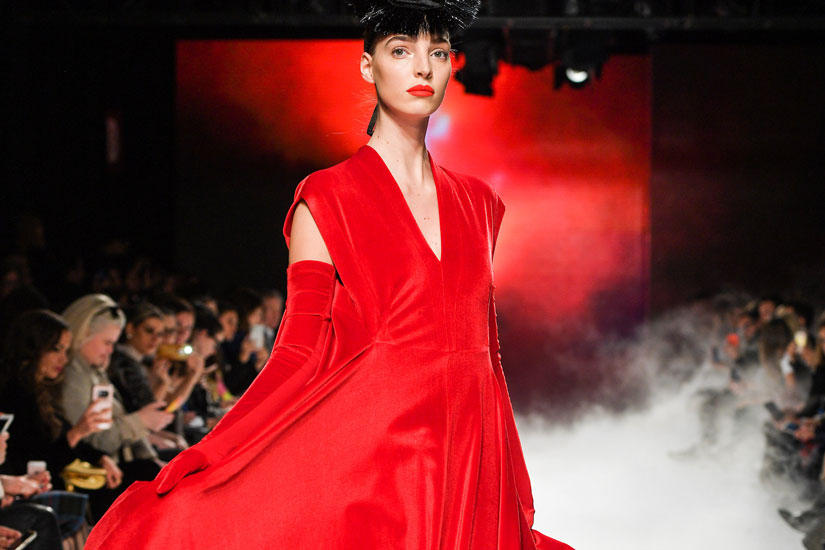 On the first day of Toronto Fashion Week, everyone was buzzing about the UNTTLD show, which opened with a regal (if slightly spooky) floor-sweeping red velvet dress and a cloud of smoke that followed the models down the runway. More velvet followed, appearing in blouses with billowing sleeves and a particularly compelling oversized olive green coat. Glitzy suiting came next, along with more relaxed, pyjama-style sets with lace overlays. The award-winning brand, helmed by Simon Bélanger and José Manuel St-Jacques, is up for the best Womenswear Designer award at this years CAFAs and has also just added another stockist to their growing roster: Toronto’s posh TNT. I spoke with Bélanger—the chattier half of the design duo—about international expansion, the trend-defying draw of velvet and taking their brand to new heights.

Congratulations on being carried at TNT, that’s so great.

It’s been a work in progress for a while now, and then this season, with everything that’s been happening at Yorkville Village, TNT decided to take us on board, and introduce us to the Toronto area. And we were lacking a good retail partner in downtown Toronto, and TNT has always been on the top of our list. So now, it’s done, we’re happy, and we think it’s going to go well.

So tell me about fall. It’s so beautiful, I think my favourite might be the oversized, textured coat.

We fell for velvet, and not because it’s trendy, we don’t really care for trends, but because we wanted to do colour, and we wanted to do really rich colour. And all the velvets that we chose have a black undertone to them. And then it’s classic pieces you can mix in your wardrobe. We were actually thinking about the Renaissance woman and the Renaissance period – and then trying to modernize it. We have a good response with our soft tailoring, so we pushed that note even further. We’ve been creating our own structure inside the jackets, to make them feminine yet structured.

In terms of colour, there was red, green, blush…

We call it shrimp colour. Which is something that we really love and we never really dared to do. Now we’re introducing it within our vocabulary, and it’s going to be there for a while now, because it looks great with black. And then we were really successful last season with our lace overlays, so we brought them back but in a geometric, polka-dot kind of lace, that gave like a 2D effect from afar, but when you come close you know that it’s two layers.

And there’s so much volume on the sleeves.

You’re nominated for a CAFA for best womenswear designer this year. How does that feel? I know you get very nervous.

It’s always a tug of war between believing in it and wanting it, and pretending you don’t really care – for your sanity. And then there’s also something that’s really exciting to us, the Suzanne Rogers prize [a $20,000 grant to be given out at this year’s CAFAs]. Because we’ve been talking a lot with our agent and other partners, and 2018 we went on a start really considering expanding outside of the borders of Canada. And if Suzanne wants to help us, we’ll be happy. It’s important also for us to do this in the right way, where we can keep supporting locally made clothing, in our own atelier that we have in Montreal that produces everything. So it needs to be a growth that’s manageable.