Are UGGs Making a Comeback?

The brand behind the infamous boots is fashion's latest darling, leaving the public divided. 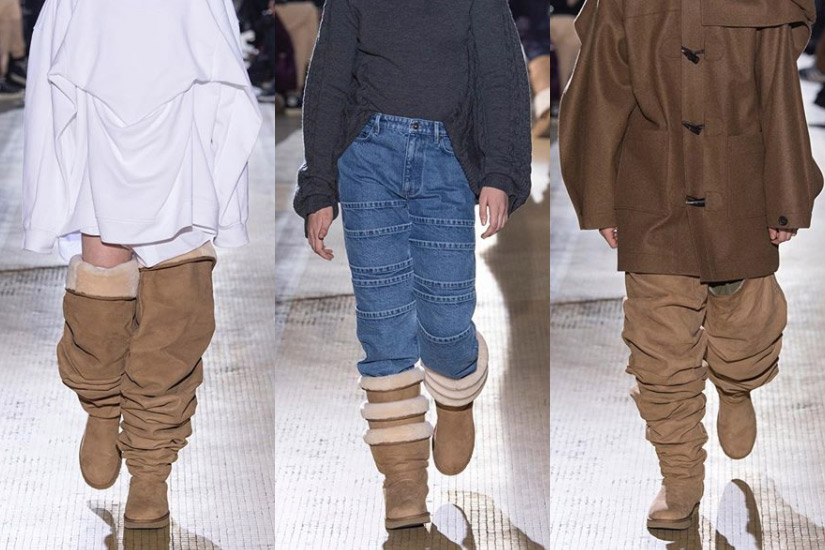 Rihanna is no stranger to rocking unique footwear — remember when she wore the sparkly Yves Saint Laurent Niki boots fresh off the runway? The trendsetter gave her blessing to yet another pair of boots—a pair of UGGs that she casually paired with a Gucci puffer.

Rihanna wasn’t the only celeb sporting the divisive boots recently. Jennifer Lopez was spotted swapping out her heels for a pair of UGGs in early December. Actress Sienna Miller was also seen in New York wearing a pair of the tan sheepskin boots. So, it raises the question: Will 2018 be the year of the UGG revival?

Though the boots have typically been most popular among the college set, the much-derided shoes received the high fashion treatment this year. During men’s fashion week in Paris earlier this month, Y/Project debuted a collection of reinvented UGG boots. Glenn Martens, the creative director behind the experimental label, took the traditional sheepskin boot aesthetic and made it all the more exaggerated by creating thigh-high, slouched versions.

Many took to social media to voice their opinions regarding the reboot, and not everyone was happy.

Friends, I regret to inform you that thigh-high Uggs exist now. I’m sorry that you have to see this.https://t.co/Pd5yIsioSP pic.twitter.com/deEw5hALRc

NEED. When something super basic tries to be extra.ME. #ThighHighUggs pic.twitter.com/K1bevHlcDH

Dear girls in highschool I used to laugh at for wearing @UGG even though I did it one time but these #ThighHighUggs got me shook and I need them NOW. #SueMe Im obsessed! Everyone RT in hopes @UGG sends me them! Xoxoxo #ugg pic.twitter.com/C2GLQJET6H

The brand that championed practicality and comfort at the expense of aesthetic appeal has always had a rough time maintaining public support. Despite celebrity endorsements from the likes of Hailey Baldwin and Oprah Winfrey (who declared the boots apart of her “Favourite Things” and gifted her audience 350 pairs in 2000) the brand has often found itself on the anti-fashion spectrum, alongside other notable offenders: leggings and Crocs.

After a period of being off the radar, however, the brand has been making strategic marketing moves of their own. In 2016 they brought on Alexa Chung to art direct their campaign for the launch of their Classic 2.0 boots. In the past year, the brand has collaborated with Moschino designer Jeremy Scott, and Justin Thornton and Thea Bregazzi of Preen. Scott created iterations with flame prints and beaded embellishments while the team at Preen presented sandal platforms. More recently, the brand collaborated with Sacai for their 2018 Paris menswear collection in addition to the Y/Project show. Unlike Y/Project, Sacai stuck to the traditional shape of the boot and paired them with chunky striped socks.

It wouldn’t be the first time we saw ugly-chic shoes making an appearance on the runway. Just last year, Balenciaga gave Crocs a makeover by creating platform versions decked out with embroidered patches; it was the shoe that launched a thousand think-pieces. A year before that, Christopher Kane sent models down the runway wearing Crocs covered in rhinestones and crystals. And who can forget Gucci’s furry “Princetown” mules? Considering the over-arching trend of women choosing comfortable shoes over painful stilettos, or opting to wear “ugly” yet practical dad-sneakers for everyday life, the UGG renaissance isn’t all that surprising.

If Riri gave UGGs her stamp of approval, maybe it’s about time we bring the cozy boots out of retirement too.