What it's like to attend Mercedes-Benz Fashion Week Russia in Moscow. 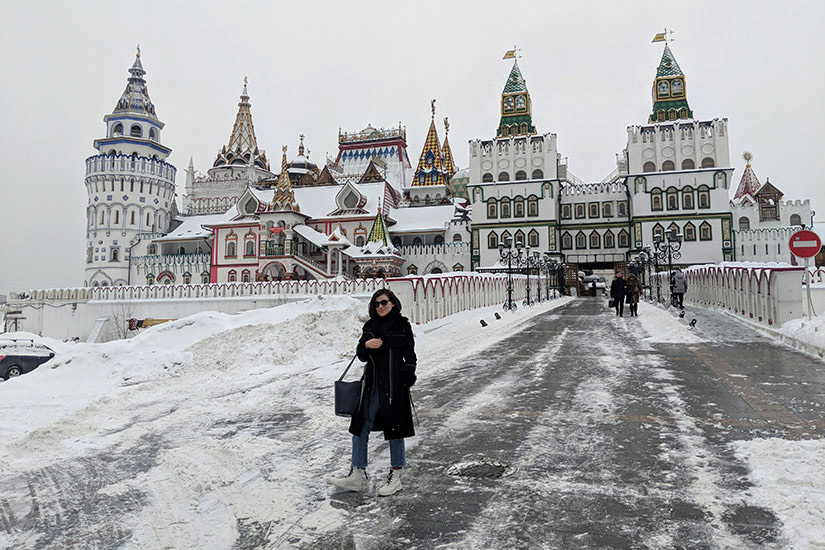 When I last visited Moscow (11 years ago) to see a great-aunt, my fashion-journalism career was still a distant dream. Nonetheless, I paid attention to the local trends. White croc-skin belts, often studded with rhinestones, hugged the hips of young women riding the metro. Aggressively bedazzled jeans were everywhere — I spotted them during strolls through the city’s densely forested parks and at the bustling outdoor bazaar in the mornings when I was picking up fresh rye bread. There were plenty of knock-offs — from “Kavali” to “Moshcino.” And the women in my great-aunt’s sleepy suburban neighbourhood were so programmed for outfit overkill, they’d don dresses with a dizzying clash of exotic floral and leopard prints to run to the store. In short, the local look was living up to a certain, well, tacky stereotype. And although I was a Ukrainian-Russian expat, I was also a thoroughly Canadianized teenager. To me, Russian fashion was like a distant relative — endearing but slightly embarrassing. And the closest Russian fashion came to mainstream popularity was the occasional Siberian-inspired collection by the likes of McQueen or Valentino.

Today, you’ll see fewer “Hugo Bozz” T-shirts, sparkly studs and platform heels and more unfussy denim, sneakers and subversive takes on communist tropes, like track jackets emblazoned with ornate Cyrillic font. This shift is largely thanks to Russia’s growing youth culture, a dash of soviet nostalgia and a plucky new class of hipster designers. The Moscow fashion scene is, dare I say, not what it used to be. And on my return to the country more than a decade after my last visit, as an editor attending the country’s fashion week in March, I could see evidence of Russia’s evolving fashion sensibility. Mercedes-Benz Fashion Week Russia (MBFWR) is in its 19th year, and, like any teenager, it still has some growing up to do. Yet despite its newbie status when compared to other fashion weeks around the world (New York’s has been in existence since the Stalin era, after all), the event has all the makings of the real deal. There’s the impressive venue — the shows go down at the Manege, a 100-year-old neoclassical exhibition hall just a few steps away from Red Square that rivals the Grand Palais in Paris. The street style — influencers rocking Supreme fanny packs, Louis Vuitton sneakers and Balenciaga jackets — is as eye-catching as the scene outside Spring Studios in Soho. MBFWR even sees its share of front-row seat-stealers — surely a sign of a fashion event worth attending.

As for the talent, old-guard designers like Slava Zaitsev — the first soviet couturier and Communist-era contemporary to Pierre Cardin — still have a presence, but it’s the younger brands that are getting all the buzz. Designer Anastasia Dokuchaeva’s high-energy lineup of satin suiting, jacquard corsets and sheer Cellophane accessories was the most-talked-about collection of the week. The clothes hit the right notes of edgy, experimental and luxurious — a fitting representation of new Russian fashion. Menswear designer Artem Shumov impressed with his deft mix of youthful playfulness, sharp tailoring and avant-garde silhouettes. I even spotted a female fashion buyer in a pair of the designer’s boxy trousers the day after his show.

Although many shows skewed toward understated cool, the week wasn’t lacking in high-glam opulence. (Russia will always love its rhinestones.) On the first day, Arut MSCW’s vinyl minis, chin-grazing ruffles and sequins galore jolted me out of my jet lag. Alexandr Rogov showed printed chiffon dresses, asymmetrical outerwear and boxy suits in cerulean and candy-apple red to an eager crowd of local celebrities.

It’s not just the runways that are putting Russian fashion on the map. The name Gosha Rubchinskiy is everywhere. Although the Moscow-born designer has never shown in Russia, his ironically nostalgic track suits, featuring fonts once associated with USSR propaganda, and high-profile collaborations with Burberry and Adidas have helped solidify the Russian capital as a global fashion contender.

Although some I spoke to in Moscow were concerned that Rubchinskiy has spurred many imitators, I see it differently. If Milan Fashion Week stands for feminine maximalism and London for rebellious artistry, perhaps we’ll start to look to Russia for what’s next in streetwear. “Young Russian designers can really own the Cyrillic branding and the sport-chic look,” says Marousya Kovylova, who does PR for GUM, a 19th-century department store turned high-end shopping destination in Red Square.

My mother recalls buying scratchy school uniforms at GUM, but now the scene is more Prada than Perestroika. GUM just launched Section, a concept store that carries up-and-coming Russian designers like Lena Maksimova and Outlaw. Now, savvy (and, let’s be honest, moneyed) shoppers can add some local labels to their wardrobes of Loewe and Marni. It feels like there has never been a better time for the country’s own fashion week.

On my final day, exhausted but inspired after a week of non-stop shows and a few too many Moscow Mules, I indulged in a fittingly traditional meal of simple meat dumplings at a restaurant. As I dined alone, with only a portrait of Lenin for company, I spotted a group of teenagers at a nearby table. They were dressed in track suits and neon puffers, and one had a babushka-style head scarf tied tightly — and perhaps ironically — under her chin. It was East meets West, kitschy meets trendy, and there was nothing embarrassing about it.

A FASHION EDITOR’S GUIDE TO MOSCOW

STAY: Old-world indulgence at the Metropol. History buffs will appreciate that this art-nouveau gem is one of the only hotels that predates the 1917 Russian Revolution. Start your day with the breakfast buffet — champagne, caviar and pine-cone jam are served in the dome-ceilinged dining room while a harpist plays. In the evening, unwind at the lobby bar while sipping on the best Moscow Mule in the city.

EAT: Elevated Comfort Food at Uhvat. Much like the fashion industry, Moscow’s foodie scene is going through a transformation. This new restaurant, located inside a former factory, is named after the large iron fork that’s used to take clay pots of food out of the traditional oven. Most of the dishes, from buckwheat to braised duck, are prepared using this old-school method.

SEE: Best of ballet at the Bolshoi. Going to Moscow and skipping the 162-year-old Bolshoi is like going to Paris and missing the Louvre — you will incur judgment if you don’t take in the ballet at one of Europe’s oldest and grandest concert halls. Be sure to linger in the lobby and intermission salons to admire the palatial flourishes.

SHOP: Local luxury at Aizel. Nestled on a trendy cobblestoned street, this shop stocks labels from Acne Studios to Zimmermann. But the selection of Russian brands is not to be missed — think slinky slips by Alexander Terekhov and dramatic printed jackets by Alena Akhmadullina.