The future looks bright for this eveningwear designer. 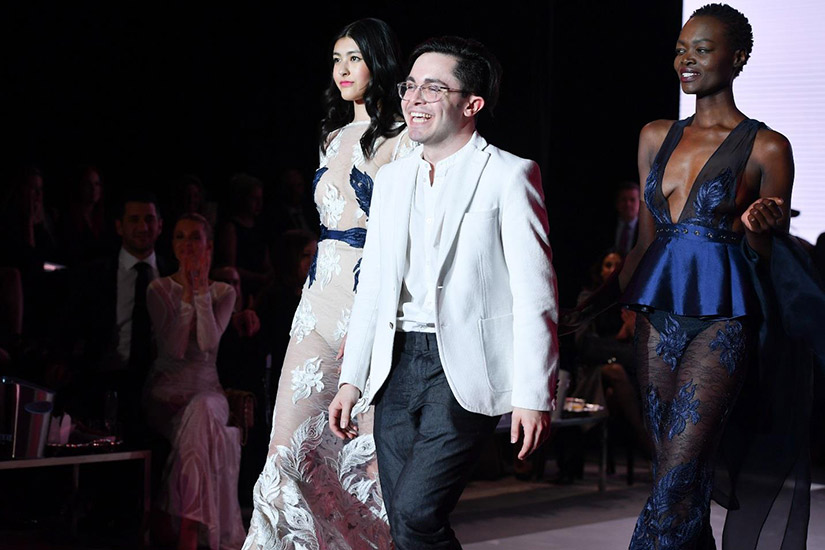 2017 is a major year for the Toronto Fashion Incubator (TFI). The first-of-its-kind center for fashion entrepreneurship celebrated its 30th anniversary this year while the New Labels competition, a TFI’s runway showdown that crowns one promising designer each year, turned 25.

To mark the anniversary, five finalists competed for a supersized prize, which included mentorship, a photoshoot and a financial boost (this year, the cash reward was $30,000). On the contemporary, streetwear side, both Andrew Coimbra and Sebastien Guarin presented directional silhouettes with an emphasis on experimental textiles and androgynous shapes. Claire Lemaire-Auger’s show was an artsy, boho escape. Then there were the eveningwear designers: sleek and slinky for Ryan Alexander and show-stopping glamour for Michael Zoffranieri, whose sheer gowns took the top spot.

Here’s what the designer had to say backstage before the show.

Tell me about your pieces.

“We’ve been playing with sheer lace work as well as the grommet details, really focusing on showing some skin in a conservative way. My focus is on eveningwear. I’ve also done bridal within my past collections, but I’ve decided to come back into evening because I can be a little more adventurous with it.”

And that’s the area you always knew you wanted to focus on?

“I totally knew and I was always inspired by the Oscar de la Rentas, the Carolina Herreras of the world. And so that for me is just where I love looking. And bridal is an accessible way to do that in Canada.”

It is. And it’s a way for designers in Canada to make money.

“It all started with a little owl pincushion. And then it fast-tracked to getting in a co-op while I was in high school, and I had the opportunity to work at David Dixon and now I’m here.”

And David Dixon is a judge and a mentor on the TFI panel. Has he given you advice?

“Yes. He’s definitely really of helped me focus, along with the other judges, Suzanne Timmins and Suzanne Rogers have been a really big help.”