We caught up with the style stars during New York Fashion Week. 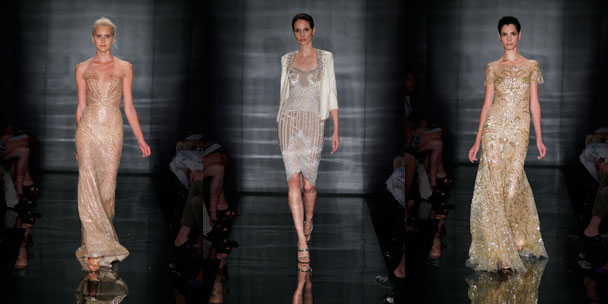 Reem Acra
First collection: Launched bridal in 1997, ready-to-wear in 2003
Reem Acra’s swish Fifth Avenue atelier is the type of place that makes you long for perfect posture and cashmere sweater sets. I wait for the designer in her salon, captivated by the sweeping sequined gowns that line the room. Acra’s assistants are conferring in hushed tones with celebrity stylists, as if raising their voices beyond a whisper will fracture the studio’s fanciful ambience. When Acra joins me, she offers me a shortbread cookie and I’m immediately struck by how softspoken she is. “One of the first dresses I ever designed had a lot of eyelet and embroidery and silk,” says Acra shyly. “I’ve always loved very elegant pieces.” It’s not surprising, then, that Acra has built her career on creating the type of glamorous gowns that pop up on red carpets. “I think you’re going to see a lot of the pieces at award shows,” actress Rose McGowan told me after Acra’s presentation the day before. “I love the crystal embellishments—it was all stunning.” In fact, Taylor Swift, Kristen Stewart and Madonna have already appeared at events in frocks from the spring collection. Acra says that Swift’s gown, which she wore to the American Music Awards, required three weeks of hand stitching. “We sewed on iridescent, pearlized sequins one by one. I didn’t want to see even one thread in between—the pattern was designed to look like the inside of a kaleidoscope.”

Chris Benz
First collection: 2007
It’s as hot as Chris Benz’s fluoro-pink hair in Avery Fisher Hall, a sprawling venue across from the Lincoln Center where the designer is presenting his spring/summer 2012 collection. Considering the inspiration behind Benz’s latest line, the lack of air conditioning seems apropos. “I developed the looks around the idea that it’s the hottest summer of all time in New York and everyone is going a bit crazy,” he says. “Candy Darling was our muse, and the show was about her going to Coney Island for a photo shoot on the seashore.” His collection consists of dizzying prints—think trippy florals in electric oranges and yellows. “They’re highlighter brights,” says Benz. “I also focused on combining many fabrics into one,” he adds, referring to the textured-cotton matelassé that is blended seamlessly with silks, sequins and summer tweeds. Suddenly, a publicist interrupts and Kelly Osbourne descends on the designer in a cloud of air kisses and perfume. Figure skater Johnny Weir, in shiny green brogues, his hair fashioned into a pompadour, has nothing but praise for Benz. “He is magnificent,” he gushes. “Everything he does is stunning and gorgeous and perfect—really, really magical.”

See more of our favourite designers on the next page…

Kimberly Ovitz
First collection: 2009 Before launching her namesake label, Kimberly Ovitz started her career with prestigious internships at J.Crew and Chanel. But it was Lindsay Lohan who propelled the designer into the spotlight when she chose one of Ovitz’s skin-tight LWDs to wear to a 2011 courtroom appearance. ELLE Canada caught up with the L.A.-based designer during New York Fashion Week to talk style faux pas and unlikely inspirations.

’90s grrrl “Growing up, I went through a grunge phase where I would wear ripped jeans and Converse. There was also a period where I thought it was cool to dress like a boy, so I wore baggy pants with my Calvin Klein briefs showing!”
Fashion hero “Lara Croft, from Tomb Raider!”
Brainstorm “After the Japanese earthquake, I was preoccupied with the idea of destruction versus relief and man versus nature. I based my spring collection on the work of Shigeru Ban, an architect who was hired by the Japanese government to create impermanent housing. That influenced a lot of the white, flowy silhouettes in my collection.”