From fancy jeans to fancy footwork, catch up on the latest news in fashion! 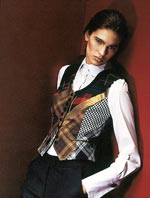 R.U. here
R.U.’s Victor/Victoria theme this season is inspired by Virginia Woolf’s novel Orlando. The collection is as complicated, with menswear suitings sewn up into delicately draped and tucked patchwork skirts and classic three-button jackets paired with feminine silk vests. Although the Toronto label is only in its fourth season, designer Rosemarie Umetsu’s resumé is stacked with impressive stores and titles — womenswear buyer at Holt Renfrew, product developer at Club Monaco — and she has a steady client in Soul Food actress Vivica A. Fox. 1-866-315-6854; www.rustudio.com

Don’t sweat it
Geox, famous for its breathable footwear, is no longer waiting to exhale here. The Italian brand recently open its first Canadian stores — one in Toronto’s Yorkdale Shopping Centre and the other in Carrefour Laval in a suburb of Montréal. The sport and dress styles stand on solid ground, blending fashion and function by combining perforations in the outsoles with a breathable membrane to keep water out and feet dry. Founder and president Mario Moretti Polegato, who invented his patented technology to rid the world of smelly feet, stumbled on the idea while hiking — he cut holes in the soles of his shoes to cool his heels. www.geox.com

Fancy footwork
Since the launch of her eyewear line two years ago, Montréal outerwear designer Hilary Radley did some fancy footwork and decided to pump up her collections with shoes and boots. Her fall line includes some 70 styles in shearling, leathers and plaids to complement her coats. Now that she has you covered from top to toe, next stop, next spring: handbags. Available at the Bay and Town Shoes across Canada or call 514-272-7221.

Shoe-in
Roger Vivier by Colombe Pringle is a “sole”-searching look at the French cobbler who crafted for the well-heeled. You may not recognize the name, but you’d recognize his shoes. This master of frivolity and whimsy mixed elements such as elegant embroidery with clear plastic and engineered, fanciful heels like the comma, the ball and the needle, named for their shape. Love him or hate him, he invented the stiletto in 1954 for Christian Dior and the sensible low-heeled, square-toed pilgrim pump for Yves Saint Laurent in the ’60s. $29.95; at bookstores across Canada.

Photo courtesy of R.U.
Little model on the prairie
Cue the chorus. Picture the poster from the Sound of Music and a woman with clear, radiant skin, looking a little like a young Julie Andrews, twirling on a mountaintop. You can almost hear the yodelling. This is the image that is selling the current crop of Alberta beauties to the world — Heather Marks, Tricia Helfer, Lisa Cant, Marla Boehr, Brenna Rose, Julia Dunstall, Claire Cormeau and Agnieszka, to name a few.

“They’re milk-fed mountain models,” says Mode Models’ president Kelly Streit, an 18-year veteran at picking potential out of a crowd. He says that the clean air, along with the Canadian work ethic, is helping Calgary replace Rio on the modelling radar.

Pretty pixie Heather Marks was only 12, with a mouth full of metal, when Streit spotted her at The Calgary Woman’s Show. Just turned 17, she has scored ad campaigns for Marc by Marc Jacobs, Just Cavalli and Moschino, as well as editorials in Italian and American Vogue, W, i-D and Harper’s Bazaar,. The camera loves her.

Streit’s successes are garnering him a great rep as a scout with the right eye. “I see two-dimensionally,” he says. “When I look at a face, I can see what she’s going to look like in pictures.” He found Tricia Helfer in the ’90s, and he hit the bulls’-eye a couple of years ago at the Calgary Stampede: when he saw Marla Boehr walking around the Midway, he chased her down — something he does quite often. “We had a little model search happening at the stampede,” he says. “It was something Marla had never thought of doing.” Now Boehr’s chart is lit up with ad campaigns and top runway gigs at Louis Vuitton and Prada. “She has arresting features — tall and birdlike. She’s level-headed and incredibly patient,” says Streit. “People love to work with her because you can put her in a corner for hours and she doesn’t complain.”

Unlike the buxom, bronzed Brazilian clones, there’s no one look coming out of Calgary. High-rise cityscapes and oil-rich slicks aside, it’s all about a stampede of eclectic, picture-perfect images of wholesomeness.

Bottom line
Designer Jason Trotzuk has a history with denim, having launched youth line Dish a few years ago. That’s why he has engineered it so that his new jeans label, Fidelity, is coming up from the rear. This time around, the Vancouverite has focused on the “bottom” line, ensuring that Fidelity’s fit emphasizes the best butt-boosting assets. “Jeans are the holy grail of a woman’s wardrobe,” he says. “A woman is always on a quest for that perfect jean that slims the thigh and forms her butt.” The label is only eight months old, but Trotzuk is finding that the rear guard is a great place to be. Available at Holt Renfrew, Caban, Aritzia, Mendocino and independent boutiques. Call 604-669-2520 for locations.