Keep an eye out for 5 street style mavens and fashion week regulars who will help define the coming year. 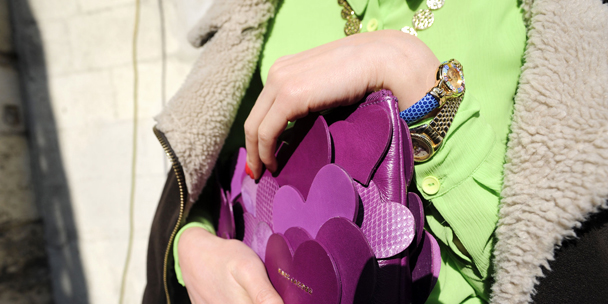 Above image courtesy of IMAXTREE.com

Increasingly, street style stars are rivaling the usual front row fashion week fixtures for the
most influential style mavens. This year, five women are destined to make a mark on the fashion scene, setting photographers and fashion bloggers into a snapping frenzy. Here’s a look at the street style darlings that are poised to become some of fashion’s biggest players.

Lauded by Lagerfeld as a “posh punk princess,” 24-year-old Alice Dellal’s hardened street style is a testament to the unfailing ties between music and fashion. Named the face of Boy Chanel at the end of last year, the UK model’s trademark half-shaved head reflects fashion’s current penchant for androgyny.

As fashion’s anti-girly girl, Dellal’s rebellious thrown-together look has earned her campaigns with Burberry and Agent Provacateur, and cemented her as Mario Testino’s muse. A punk rock drummer and record label founder, Dellal and her commanding style proves the industry still values individuality – she pairs her Dolce & Gabbana bodycon dresses with combat boots and her Charlotte Olympia with ripped tights and baggy plaid button-ups.

Swedish supermodel Sara Blomqvist’s classic femininity has earned her everything from runway spots at Marc Jacobs, Proenza Schouler and Prada, to Valentino campaigns and prominent editorials.

Off the runway, she’s noted for her girl-next-door minimalism and achievable style. Blomqvist’s off-duty penchant for blue jeans, blazers and bulky scarves help anchor her delicate features. And while her combination of classic pieces channel an all-American aesthetic, she always adds a surprising twist like a fur topper that keeps
street style photographers on their toes.

Heiresses to the Clarins cosmetics fortune, the Courtin-Clarins sisters are often photographed together in complementary looks. Virginie and Claire use their sisterly bond to tell a fashion narrative through pieces by Chloe, Gucci and Reed Krakoff that revolve around prints, primary colours and mid-90s throwbacks.

A fixture at Fashion Weeks, the duo’s exposure increased over last year and they have slammed the hoity “heiress” stereotypes via their innately cool French girl vibe (and their fashion look is always punctuated by their flaxen strands paired with their signature dark power brows). By donning bright tones, texture-rich fabrics and pieces that work with the other’s ensemble, their street style looks are exceeded only by their Clarins campaigns and their new place in the front row.

Though only 18, Tali Lennox’s classic grunge look adds clout to 2012’s fixation with 90s, landing her in 2011 editorials for British Vogue and campaigns for Burberry, Acne and Prada. The star of AnOther’s JEAN D.I.Y. Project in collaboration with Rag & Bone, Tali recently walked for Christopher Kane, Miu Miu and Chanel.

The daughter of singer Annie, the youngest Lennox combines her androgynous DNA with feminine pieces by Clements Ribeiro and Mercie Marie. She garnered more of the fashion spotlight for her effortless mix of high and low style choices. Reflecting a new generation of both models and pop culture royalty, Lennox’s evolution will only earn more notoriety following inevitable exposure at this year’s F/W 2012 shows.

A fixture of Lookbook and her own blog, Liz Coicou’s style shows what can happen when fashion reflects a personal attitude over name brand allegiance. Earning viral attention following photographer Ludget Delcy’s 2011 documentary Life Of A Model, the 25-year-old Brooklynite maintains a strict Internet presence to document both her career and accolades earned from major fashion websites.

Abandoning convention by buzzing her hair off, the model recently landed a role in Marc Baptiste’s fashion film, Hair. This year, she maintains her momentum, being praised for her streamlined, masculine look, stepping out in pieces by Kelsi Dagger, Muubaa and vintage finds.

Cooler months call for serious layering skill testing, but with these tips from our styling team, you'll be taking your layering game up a notch.

Sometimes, it's by getting back to basics that we elevate our style game. Oozing elegance and insouciance, the humble wardrobe essential that always has your back (pun intended) is the plain white shirt.

Since the 1950s, the famous footwear has never gone out of style, but that doesn't mean it isn't undergoing a renaissance. From grunge to dressed up, here are some of our favourite looks highlighting the star boots.