Supermodel, rock star and Sean Lennon’s BFF. Is there anything this Canadian “It-girl” can’t do? 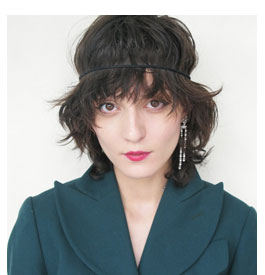 From the moment she debuted in 2004, supermodel and Canadian “it- girl”
Irina Lazareanu has been charming the fashion world with her quirky boho style and rock ‘n roll attitude. Official muse to the likes of
Nicolas Ghesquière
and Karl Lagerfeld, Irina quickly became one of the hardest working models in the biz (she still holds the record for most runway shows in a season) until last year when everyone’s favourite wild child model inexplicably disappeared from the fashion scene. “For five or six years, I don’t think it was possible to turn a corner in fashion without seeing my fringe-y little face,” laughs Irina. “I definitely burned the candle at both ends. I was trying to record and tour and do some styling and all these crazy creative things, working a lot and flying twice a week—I just came to a point where I was physically and mentally completely exhausted.”

After taking a year off from fashion, Irina is back in her element, having already shot a number of editorials as well as campaigns for MAC,
Joe Fresh Style and a top secret campaign for a high-profile client. “If I tell you about it I’ll be sued for about ½ million euros!” says Irina. “That was the first time in my career that I’ve had to sign something like that so I know it’s a pretty big deal.” (note to self: keep eyes peeled for EPIC upcoming fashion campaign.)

This month, her clothing line, Rini by Irina, will debut (in Japan only—le tear) and will feature bohemian rocker staples like the fun little dresses and leather jackets Irina is famous for. But before you pack your bags for a new life a la
Lost in Translation, you’ll be glad to know you may not have to wait long for the collection to land in North America. “Hopefully next season it’ll be here,” she says. “I’m working on it!” As for who will model the campaign, those who suspect Kate Moss will return the favour after Irina headlined her Topshop collection might want to think again. “I can’t say who but it will be a couple of different people who you’ll definitely recognize,” says Irina. “But a switch with me and Kate would be funny! You scratch my back I’ll scratch yours, kind of thing? Well, you know, to put a cheeky bend on it: we share everything else, why not that right?”

Read on as Irina dishes her thoughts on her fellow Canadian models, Lady Gaga and a certain young man that can play guitar really well…

Peace of mind. No matter what you do in life or who you are or what your job is, I think there are certain ethics about remaining a good human being, staying grounded and keeping your values. For me, that’s peace of mind. Not changing and staying as close to who you are as possible.

I talk too much.

I think it’s a strange mixture between Patti Smith and Kate Moss.

Well—and I really will surprise you with this answer—Karl Lagerfeld! I’d have Karl dress me for the rest of my life no problem. He is the ultimate master at what he does.

Best moment of your career so far?

My first
Chanel campaign. For models I think that’s the summit of what you try to achieve in this business. Chanel is the best of the best, the classiest, the oldest, most respected line out there.

I did a shoot with Mr. Irving Penn before his death—that was quite special for me, it’s like working with royalty.

Models you looked up to when you were starting out?

Well, obviously Kate. She was quite a mentor to me and taught me a lot. And Shalom Harlow was somebody else I really looked up to—she gave me some great pieces of advice that I still cherish.

I have a journal that I’ve kept since I was a young teenager. It has everything in it: pictures and collages and letters and bits of paper, stuff that I’ve written or read…it’s basically my holy bible. When people ask you what you’d grab if your house was on fire, for me that’s it.

said she would take her childhood teddy bear!

Awwww!! Oh, I love Coco!! She’s another great Canadian girl. And of course, there’s Miss Daria! I’m very fortunate to be part of a really great generation of Canadian girls.

I could tell you a couple but I don’t know if you could print it…!

Nope. When I first started out in a band it was a bit cliché because all the girls were covered in tattoos so I figured I would be a rebel and not have one. It’s just too much of a commitment. I would probably go crazy thinking about it. I’m not the butterfly-on-your-ass kind of girl.

Vintage clothes. It’s absolutely ridiculous, I’m afraid to say. I’m fortunate enough that I don’t have to buy designer clothes—we’re quite spoiled, us girls, we’re dressed by the best people on the planet—but I love mixing it with a bit of vintage flair and I have to say that I cannot enter a vintage shop without spending a LOT of money. If I see a 1920s or 1930s dress it’s hard for me to pass it without trying to buy it.

…Okay I might get shot for this, but that whole Lady Gaga thing? Over it! I love a costume and I love a bit of extravaganza with somebody that’s being original with their own personal style but unfortunately I don’t think that’s the case. And yes, Madonna did do it 20 years ago and it was amazing and unique back then but when you try to redo something exactly and call it something else I just think it’s a bit…pretentious.
–pause– I am so getting killed for that.

I’m a very big fan of Dr. Hauschka—they have amazing natural products that I love—but I also just discovered Fresh! I’ve been using everything from their scrub to their cleanser to their day cream—especially the last few months, flying back and forth between Europe and New York so often, it really dries up your skin. So I’ve been treating myself to that and it’s made a huge difference in my skin.

Accomplishing the things everybody thought I couldn’t do. When I first started out people were kind of having a laugh about it. You just have to keep on going and not give into that. No matter what you do in life, if you’re going to be your own person and speak your own mind—not because you want to be different but because you feel it’s the only way—you
will encounter some resistance. People like to put you in a box.

Life isn’t as hard as you make it out to be.

I know there are a lot of people on Facebook and Twitter posing as me but I’m sorry to say it’s not me! I get yelled at by people saying, “I asked you to add me as a friend!” and I just have no idea—I’m not a very technologically advanced person. And just the idea of letting the whole world know how many eggs I had in the morning…I just don’t understand why! I think some things are better left a mystery.

“People think I’m
cool but I’m really
dorky.” And I am. That’s a real truth. I am a very big dork and very proud of it.