Our favourite Olympic gold medallist talks hats, beer and being on Oprah. 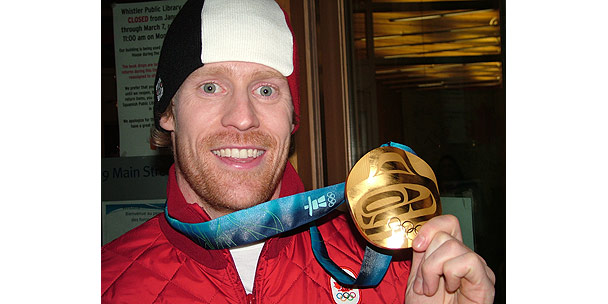 "I’ve got all kinds, from ball caps to fedoras, and everything in between. I have a cowboy hat that I received from the City of Calgary so I can add that to my collection."

Is that sort of like the key to Calgary?

"Pretty much! Getting a white hat cowboy hat from Mayor Dave Bronconnier is an honour in
Calgary."

What’s your favourite piece of clothing?

"I received a cashmere scarf for Christmas that I quite enjoy–who doesn’t like cashmere? And, I’m passionate about the whole barefoot movement, so I’m quite taken with these barefoot shoes and have collected a few pairs."

Do you wear the shoes when you’re training?

"I do sometimes. I also wear them on an everyday run around town."

Since you won the gold medal, you’ve been making more public appearances. Has your style changed now that you’re more visible?

"I don’t feel pressure to be somebody that I’m not and get all dressed up. I’m still wearing the same clothes and sort of rockin’ the same style."

Do you have any lucky charms that you wear when you compete?

"I avoid those sorts of things. I worry if I forget or lose it, it could potentially wreak havoc on my preparations for a race. It’s also because there is limited room to wear anything under our speed suits. As we say in our sport, ‘it’s skin to win on race day.’ "

Does your GF ever weigh in on what you’re wearing?

"She does from time to time. I certainly don’t depend on her to figure out what I should be wearing or the direction I should be heading with my style. My folks and my family have always found it incredibly difficult to shop for me because I am fairly picky."

More with Jon on the next page …

It was a tough job, but we’ve picked out the sexiest FIFA 2010 players. Check them out here.

Was there one piece in the HBC Olympic collection that you really loved?

"Lately, I have been wearing my big grey sweatpants around the house. I like the red buffalo plaid jacket too–[if they didn’t give it to us] I would have bought one myself."

Do you have any go-to accessories, other than your gold medal, of course?

"I’ve got a couple watches that I wear when I’m not competing or training."

One of the most memorable moments from the Olympics was the footage of you guzzling from a pitcher of beer after you won. What’s your favourite brand of beer?

"Well, I know that this will disappoint a lot of people and I probably sound like a politician when I say it, but I don’t discriminate. I drink anything that’s cold and wet and sometimes it doesn’t even have to be cold!"

"I never talked to the lady, I never got to jump up and down on the white couch like an idiot, and profess my love for my girlfriend. But I did tape a bit with her reporter, Ali Wentwoth, in Robson Square–I taught her how to do skeleton."

"My Facebook page was hijacked! Someone used my name to start up a fan page and he’s presenting himself as me. And while I have a great number of friends, I’m not sure I like having anybody masquerading as me."

What’s on your ipod right now?

"I’m listening to Ash Koley from Winnipeg. Phil Deschambault writes some of the songs and he’s from my hometown. Keep your eye out for them."

So you’re calling it now–they’re going to be the next big thing?

Why we love men’s style