The iconic French sportswear brand is enjoying a revival in heritage fashion labels. 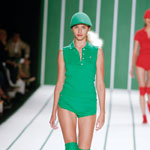 Doesn’t everyone have a polo shirt lurking in their closet? This seemingly indestructible top — made of a light knitted fabric called “jersey petit piqué” — was designed in 1933 by René Lacoste. He was the French tennis legend who made history when he wrenched the Davis Cup away from the Americans in 1927 and 1928.

The company has long enjoyed the fruits of this shirt invention, which is now available in 90 variations and in every hue imaginable for men, women and children. Lacoste has also branched into branded sports equipment, fragrances, leather goods, accessories, and even cars and luxury yachts. Now Lacosts has set itself a new challenge: to be a player in the hyper-competative world of fashion.

“We have done extremely well lately,” says Philippe Lacoste, René’s grandson and the company’s director of public relations. “The recent wave of interest in heritage brands among young fashion people has been terrific for us; however, we all know that trends go in cycles, and we want to ensure that when this one cools we will continue to have a strong appeal for consumers.” Enter creative director extraordinaire Christophe Lemaire, who worked for such top talents as Thierry Mugler, Michel Klein, Jean Patou and Christian Lacroix before joining Lacoste in 2000. Part of the company’s reinvention as a fashion brand is to mount buzz-generating runway shows.

Photo courtesy of LacosteIts first show was held in Paris for the men’s spring/summer 2002 collection, but the market to seduce is the United States, where in the last four years the brand has doubled its sales and where women account for 40 percent of its customers.

Lacoste’s recent spring/summer 2006 show during New York Fashion Week was a hit. “My challenge was to make sportswear more formal,” says Lemaire of the collection he calls “preppy pop.” The show opened with a homage to green and white athletic stripes. The runway itself echoed this look, which was found in jackets, blousons, dresses and shirts.

To pump the brand’s street cred, Lemaire mined Japanese and Brazilian influences and added references to skater girls with colourful helmet caps, knee pads and knee socks. He also took some liberties with the iconic crocodile, supersizing it on slinky black-and-white bathrobes. The current ad campaign reinforces the upbeat brand message as well. And it’s one that is obviously striking a chord, because the appetite for crocodiles appears to be insatiable with over 42 million Lacoste items sold last year in 110 countries.