Donatella Versace brings her exuberant and colourful style to the masses in a collaboration with H&M, set to hit stores this November. 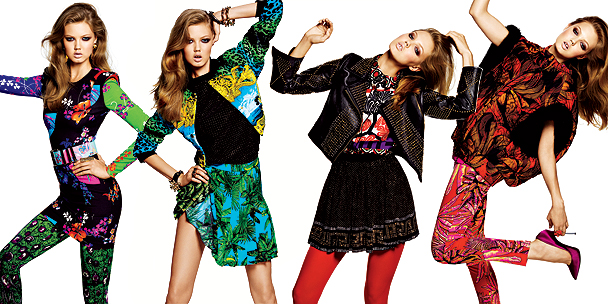 The white roses are ready, and the flame of the Baies-scented Diptyque candle flickers patiently on the table. A bodyguard with eyebrows plucked to Action Man perfection steps into the doorway and glances around the room. Two packets of herbal throat lozenges—one lemon, one orange—are placed next to a packet of Marlboro Reds. A lighter is placed in an ashtray at the 12-6 position. Inadequate, the plain ashtray is taken away and replaced with a more baroque-cut glass number and the lighter repositioned to 9-3.

I hear the clack-clack of a pair of heels marching up the hallway long before Donatella Versace swoops in. Like most famous people, in real life she is tiny—a palm-size version of a real person. Unlike many, though, she doesn’t disappoint: Her olive-skinned, gym-bodied frame is dressed entirely in black—the sole colour being a flesh-coloured patent decal in the traditional Versace Doric pattern, offset with her long shank of very perfect blond hair. She lifts huge black sunglasses and flashes me her eyes as she greets me with stereotypical Italian zeal, smiling with palms wide open. “You mind if ah smoke?” She lights up before I can reply. The throat lozenges remain untouched.

The House of Versace is a brand that, since Donatella’s late brother, Gianni, opened its doors in Milan’s Via della Spiga in 1978, has been synonymous with brightly coloured luxury. Who can forget Jennifer Lopez swooping around the Grammys in her jungle dress in 2000? Or Liz Hurley’s 1994 debut in that safety-pin dress? Often featuring leopard prints, palm trees, the standard gold Medusahead insignia and other bits of pattern all mishmashed together, Versace was the label of the 1990s, reflecting a decade of opulence, optimism and futuristic playfulness. Buying into the brand made you feel as if you were flying on a private jet or lying on Elton John’s yacht, cruising around Lake Como. Sadly, the noughties did not prove quite so buoyant. Shiny models in multicoloured Lycra didn’t relate to the general style consciousness, which had headed to a darker, grungier place. Versace’s profits ground to a halt, and the brand lost its cool. Now, though, individuality and attitude are fashion’s driving force, and Versace has that in spades. In short, the time is perfect for a project that will bring Versace’s aesthetic to the masses: a design collaboration with H&M.

Want to know why Donatella chose to collaborate with a mass-market retailer? Find out on the next page…

“I have always wanted to do an homage to Gianni and the past,” says Donatella, her Italian accent deliciously heavy. “But when H&M approached me a few years ago, I wasn’t ready to collaborate. I wanted to position Versace as the best luxury brand of the 21st century again, so I focused on that.” That focus involved bringing in Christopher Kane to consult on Versus (and, while she was at it, buying back the Versus licence, which had been sold to Swinger International SpA), hiring a new CEO and working with another member of the platinum-blond club: Lady Gaga.

“She is a pop icon of today, and Gianni was one of his time. I could have designed clothes for her, but I wanted to do something special,” explains Donatella, talking at such a fast pace that it’s hard to keep up, “so I decided to open the archive and let her put together clothes that matched her personality.” Is Donatella a fan of Gaga’s music? “I looooove her music—she is amazing!”

With consummate media-savvy prowess, Donatella put her clothes on, arguably, the most photographed woman of the decade. “When Lady Gaga started to wear our clothes, she received tons of questions on her website asking where she got them. Of course, not everyone can have archived Versace, but I think people are ready and waiting for something they can have.”

Despite the white roses and Diptyque candle, Donatella is incredibly down-to-earth. Whatever “it” is, she gets it. She understands that Lady Gaga’s fans need to know where to get a lime-green-and-cerise leopard-print cropped bomber jacket with palm trees on it because they need it to feel that extra bit closer to their heroine. “She’s a vision,” she says matter-of-factly. “She’s so creative, she doesn’t let you breathe for a moment. I was already looking through the archives with her and said yes with enthusiasm when H&M asked me again if I would collaborate with them.

The collection—both menswear and womenswear— features studded dresses and jackets, dangerous-looking heels, oversized costume jewellery and eye-popping colours. “And there are two things that H&M has never had [from past designer collaborations]: red-carpet dresses and homewares,” Donatella spouts with her unending enthusiasm. “H&M asked for 25 looks; I gave them 31.” She waves her hands. “I chose the best of the best. It’s like a rock star choosing her greatest hits. I’m not being humble right now, by the way.” Downstairs from our smoky, Baies-filled den, Lady Gaga is appropriately blasting in the photographer’s studio as model Lindsey Wixson is getting her groove on in the new collection.

I ask Donatella how she feels about the future: The past decade might not have been quite so kind to her, but she seems to carry that genius blaséness about explaining it with a what-can-you-do shrug of her shoulders. “It’s fashion,” she says. This collaboration is, as Donatella admits, a bid to re-establish Versace in the minds of fashionconscious bright young things. “I never relax—I don’t want to,” she admits, lighting another cigarette. “I am so excited by what I’m doing. I’m sure the people who work for me hate me—I’m always on hyper setting.” She grins at her assistant, who is quietly emailing in the corner, thumbs moving like industrial pistons. It’s not just her assistants who get the hyper setting; Donatella’s 25- year-old daughter, Allegra, has started to work for the family firm too. “She has agreed to sit on the board of the company [Gianni left her the majority shareholder after his death],” says Donatella. “It’s not easy to work with your mother in a big company, but she is finding her own way. She gets on very well with the other designers. She is having a great time; she is very humble and patient—not so much like me!”

She lifts her glasses and winks at me with her cartoonish eyes. “People are looking forward to it—the uncool designer who has turned it around,” she beams at me. “I’m glad that the ’90s are coming back—it feels fabulous to be at the forefront of it.” She’s right: Everyone needs a bit of colour in their lives—perhaps even the full colour spectrum in one outfit, with some killer heels, a bag and a matching duvet cover at home.