Fashion and tennis: 15 outfits that have hit the mark

Tennis and fashion go hand-in-hand, and just like runway fashion, tennis outfits can go from stunning to what was she thinking? In light of the US Open, here are our top 15 tennis fashion moments. 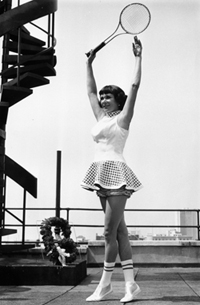 Years pass and the length of skirts decreases. In 1949, the American Gussy "Gorgeous" Moran was the first to wear apparent panties under her skirt at Wimbledon. Even more remarkable was that the panties were in lace ruffles! This photo shows the 1968 Moran wearing a reproduction of the "legs of crime ".

There are panties that are panties that get people talking. French player Tatiana Golovin wore a particularly noticeable red pair during the Wimbledon tournament in 2007. Ten of the 15 questions that were asked during the press conference after the match, we about her red panties …

Christ Evert – who was inducted into the Hall of Fame at the Rogers Cup this year – has often displayed a stylish and tasteful look on the tennis court, as shown here, in 1980 at the U.S. Open. So chic in 1987, she was forced to interrupt a game after losing a bracelet encrusted with diamonds on the court where she played.

The American player may have never surpassed the 39th ranked player, but her appearance in the pages of Playboy in 2008 did not go unnoticed. And for good reason! She showed it all with a new uniform style: a mini top and a transparent mini-miniskirt (with and without panties).

Why leave the leopard print for Halloween when you can wear it during the U.S. Open? Bethanie Mattek, who is obviously not afraid of fashion risks, sported this animal print in 2004. Note: wearing a coordinated visor recommended.

View a gallery of all our favourite tennis and fashion momemts — the good, the shocking and the bad!!

Text and images courtesy of ELLEQuebec.com