Fresh fashion buzz from the world of chic. 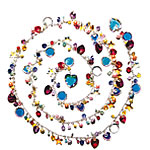 Toronto designer Kellie Leman’s pieces are a fave among celebrities like Shania Twain, Joely Fisher and Cindy Crawford. You can wrap and tie this metre-long Swarovski-crystal lariat into whatever length you please. Despite all the ice around your neck, you’ll be hot ($1,000,
www.kellieleman.com
).

Kate and Calvin
Calvin Klein and Kate Moss are partners again. The brand has a history with Moss, first launching her to fame in the early ’90s. Now it’s helping her rehabilitate her career after last year’s drug scandal. This fall, you’ll see Moss and male model Jamie Dornan in its jeans campaign — proving that nothing can come between Kate and her Calvins.

Buckle up! Handbags get the belt
When menswear designer Dana Harvey was revamping his 1950 Buick, he thought it would be cool to weave a handbag out of the leftover seat-belt material for his wife, Melanie. That started the two on a career as accessory designers: Harveys Original Seatbeltbags debuted in L.A. nine years ago and are now available across the United States, Sweden and Canada. Made of new nylon seat-belt material, the bags can hold up to 2,268 kilograms ($90 to $230, www.australianboot.com).

Cute as a button
Club Monaco’s designers scooped up all the vintage glass buttons from a Paris flea market to make these limited-edition necklaces. Only about 1,000 will be available in Canada and 2,000 in the United States. Get ’em while you can at Club Monaco’s flagship store on Bloor Street in Toronto ($79 each, www.clubmonaco.com).