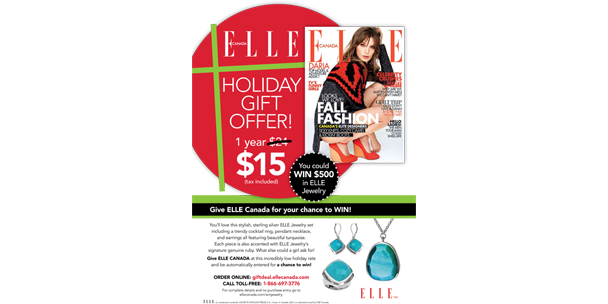 1. The contest begins on Wednesday September 22nd, 2010 and concludes Sunday January 16th, 2011. To be automatically entered into the ELLE Canada “ELLE Jewelry Giveaway” contest, subscribe or renew your subscription to ELLE Canada by visiting giftdeal.ellecanada.com. For no purchase entry, submit a 100-word or more essay on “Why I love ELLE Canada Magazine” and mail to ELLE Canada “ELLE Jewelry Giveaway” contest, 25 Sheppard Ave. West, Suite 100, Toronto, ON, M2N 6S7. Limit one purchase entry per day. Maximum one mail-in entry per envelope with sufficient postage. To be eligible, all entries and/or subscriptions must be received on or before 11:59p.m. (EST) Sunday, January 16th, 2011, the contest closing date.

2. Winner will be selected in a random draw at 2pm (EST) on Wednesday, January 19th, 2011 in Toronto, Ontario from all eligible entries received by ELLE Canada.

Ten (10) prizes will be awarded. Each prize consists of the following:

3. Total value of each prize is $487 CDN. The selected entrants for each of the ten (10) Prizes will be notified by phone within one week of Wednesday, January 19th, 2011. In order to win, the selected entrant must first correctly answer, unaided, a time-limited, arithmetical, skill testing question administered by phone. Prize must be accepted as awarded and is not transferable or convertible to cash. If the selected entrant cannot be reached by Friday, January 28th, 2011 or if for any reason cannot be awarded the prize, another contest entry will be randomly selected, and the above procedure will be repeated, until the ten (10) prizes have been awarded. ELLE Canada (Les Publications Transcontinental-Hachette Inc.) retains the right in their absolute discretion to make prize substitutions of equivalent kind or value for any reason whatsoever.

4. By entering, the winner agrees to sign a standard declaration and release form confirming compliance with the contest rules and acceptance of the Prize as awarded and releasing Les Publications Transcontinental-Hachette Inc. from all liability relating to the contest and the acceptance/use of the Prize. By entering, contestants agree to the use of their photograph, names, and places of residence, without compensation, in print, radio or televised publicity relating to the contest.

5. This contest is open to all residents of Canada who have reached the age of majority in their province/territory of residence and only where the contest is offered and permitted by law. Void where prohibited by law. Employees, directors and officers (and those with whom they are domiciled) of ELLE Canada (Les Publications Transcontinental-Hachette Inc.) and their advertising and promotional agencies and prohibited from entering the contest. Les Publications Transcontinental-Hachette Inc. accepts no responsibility for entries lost, misdirected, illegible, incomplete, delayed or destroyed, or for the failure or malfunction of any hardware or software. ELLE Canada (Les Publications Transcontinental-Hachette Inc.) has the right to terminate the contest subject to the approval of the Régie des alcools, des courses et des jeux in Quebec, or to change the contest rules at any time without notice, for any reason whatsoever.

6. The decisions of ELLE Canada (Les Publications Transcontinental-Hachette Inc.) are final with respect to all aspects of the contest. The contest is subject to all applicable federal, provincial and municipal laws. No correspondence will be entered into except with the selected entrant and individuals requesting a copy of contest rules. The odds of an entry being selected depend on the number of eligible entries received by the contest closing date. All entries become the property of Les Publications Transcontinental-Hachette Inc. and none will be returned. Les Publications Transcontinental-Hachette Inc. and third parties may make the information on these entry forms available for promotional purposes unless entrants request otherwise by making note of this on their entry form.

Dior marked the beginning of Paris Haute Couture Week, launching a Couture collection inspired by Monsieur Dior and his superstitions.

16 Sweaters to Keep You Warm and Stylish This Winter Season

Oversized, playful, preppy or sporty, we've narrowed down our 16 favourite cozy knits to take you through winter.