What kind of a guy is he?

Tips from bartenders on how to judge a man by his accessories -- and by his drink. 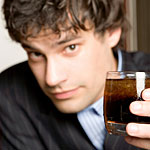 We’re all for
not judging a book by its cover, but we have to admit there’s a lot you can tell about a guy from his drink order. Chances are good that if he…

1. Drinks martinis: He’s mature and comfortable with himself.

2. Drinks margaritas (and it’s not summer): He’s a closet frat boy who wishes he worked at Club Med.

4. Drinks champagne: He’s out to impress, or he’s celebrating something.

5. Drinks cosmopolitans: He might be a better personal shopper than a date.

6. Drinks beer: He’s a regular guy not out to get hammered (assuming it’s not from a funnel).

7. Drinks tequila shots: He’s more interested in getting hammered than he is in you.

8. Drinks something with chocolate in it: He belongs in Weight Watchers. Or will soon.

Extra, extra! What his accessories say about him
Just as you give away certain character traits without necessarily saying or doing anything, so does the guy in front of you. Take a quick look at what he’s carrying and see what you can learn!

A BlackBerry: He’s important enough at work that the company needs to be able to reach him at a moment’s notice. (That doesn’t mean he should be checking it while he’s talking to you!)

A briefcase: You’re looking at an important executive…or a big dork. (The outfit should match the bag, so if he’s wearing a nice suit it’s safe to assume the former.)

A backpack: This guy’s more laid-back, probably with a job that is artistic or at least doesn’t require formal dress. Or, he’s coming from the gym.

A money clip: He’s organized and elegant, but doesn’t like the bulk of a wallet. He’s also unsentimental — no pictures tucked away with his driver’s license!

A phone headset in his ear: A deal breaker, as far as we’re concerned. When you come into a bar, you’re there to disconnect. Business should be done in the office — or at least outside the door.

A Treo or Palm Pilot: He’s got cash, and he’s probably got his act together. Plus, if he always has his date or address book with him, he can’t ever say he lost your number or forgot an appointment!

A pager: You’re going to be sharing this guy with whoever so desperately needs him on the other end, whether he’s a doctor on call at a hospital or a party-animal who can’t bear to miss a single shout-out from his friends.

Get relationship advice from other readers in our forums.

We chat with the former titleholder about the beauty that stays and knows no age.

Everything to eat, sleep, see and do in the seaside city.