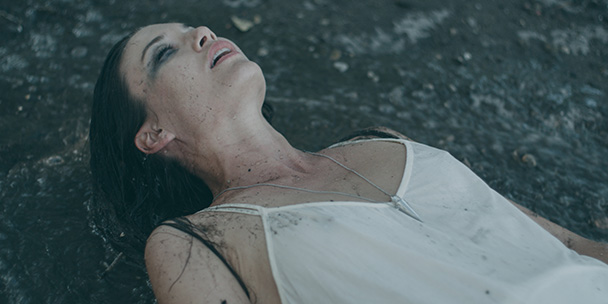 Ahead of his second album drop on February 29, iTunes Singer / Songwriter of the year Jon Bryant has a new single ‘Light’—and he called in some major Canadian talent to make the video.

Behind the lens on this dreamy, dramatic mini-film was Caitlin Cronenberg, daughter of the legendary Canuck filmmaker David, and a super talented artist in her own right.

Before we get to the single video below, we grabbed Caitlin for a few q’s about the ‘making of’…including why they chose not to shoot this in LA.

Q: Where was this video filmed? Why that location?

A: We filmed in Toronto’s east end and on Cherry Beach. I’ve always love the grittiness and textures of that part of the city. It just offers so many great visuals so close together. We had considered shooting in LA but then we figured we were both Canadian so why not embrace our home! I’m so pleased with the result.

Q: How did you go about selecting the model who plays the “main character” in the clip?

A: We discussed a few options to play the lead and kept going back to Victoria. She has this incredible strong look and is so beautiful. You can really believe she is a sad character trying to hold it all together. She was so perfect. And she’s a fantastic actress. She gets so much emotion across with the smallest gestures. Subtle and beautiful. Just what we wanted!

Q: How did this concept evolve? Is the finished result different from the initial seed idea, and if so, how?

A: Jon wanted to tell a story with the video rather than having it be purely a performance video so I went from there. Honestly I just listened to the song over and over and the video played in my head. It is almost exactly as I imagined it but made even better because of our amazing cinematographer, Jon Simonassi.

Q: What was the best moment for you in the production of this video?

A: We had an amazing team and were just having fun all day! I think the most memorable part was the team dumping coolers full of lake water over Victoria while she lay in the sand! She was such a trooper! Not a single complaint that whole time.