Aliyah Shamsher finds out what draws celebs like Nicole Kidman to Kamalame Cay, a private island resort near Andros Island in the Bahamas. 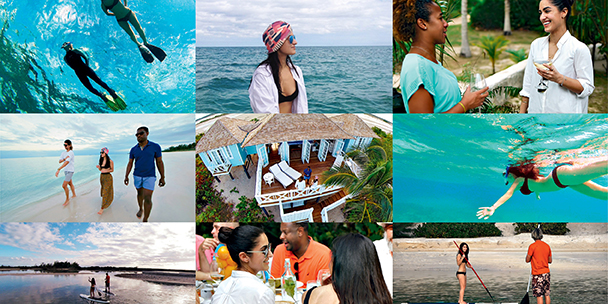 It’s one thing to write a travel story; it’s something else entirely to shoot a video and have two camera guys and two producers (and, at times, even a drone!) follow you and film your every move.

I arrived at Kamalame Cay, just off the coast of Andros Island in the Bahamas, by seaplane on a very hot afternoon. It all felt so glamorous—right up until the pilot turned around and said with a chuckle, “You’re going to have to swim to shore.”

I laughed because I thought he was joking. But he was definitely not joking. He clearly did not get the memo that I was going to be on film and that I was in no position to swim to shore. (To be clear, I was wearing a blazer.) When I finally got off the plane, the first thing I did was drop my shoe—which proceeded to float away.

I did eventually make it to shore (you’ll have to watch the video below to find out how), and I was able to complete the shoot.

And while there were times when I was very (very) aware of the cameras—like while I was paddle boarding in my bikini (thank God for Pilates) or trying to take a meditative beach walk with a drone hovering behind me—by the end of the long weekend, I barely noticed they were there. (But they were definitely there.)

And the end result? You’ll just have to watch the video to:

1. See what draws celebs like Nicole Kidman to this hideaway.

3. See what it’s like to ride a bike through palm trees like you’re in your own tropical music video.

4. Learn why guests fly in from all over the world for just one luncheon.

5. Find out if I ever retrieved that shoe.