Travel Insiders: Until the Ribbon Breaks 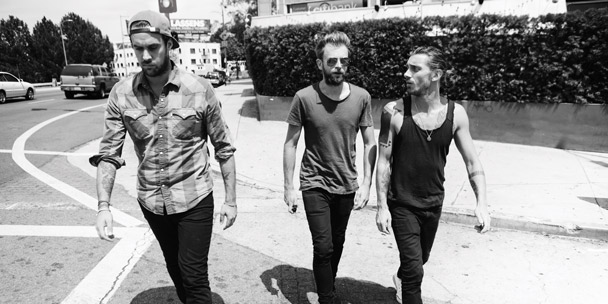 It’s like a rickety, fairly chaotic train that somehow arrives on time,” says Pete Lawrie-Winfield (before leaping out of his seat in a Toronto dressing room to frantically knock on wood). Lawrie-Winfield is talking about life on the road with Until the Ribbon Breaks, the self-described “genre: indefinable” band he fronts, alongside Elliot Wall on drums and James Gordon on synth. The U.K. natives just made the move to Los Angeles, although they’re currently criss-crossing the globe – Berlin! Portland! Coachella! – promoting their new album, A Lesson Unlearnt. “If you added together all the miles we’ve travelled and directed them toward space,” says Lawrie-Winfield, “we’d currently be circumnavigating Jupiter.”

Morning hangout Lawrie-Winfield: “Spring for Coffee. I always get a Gibraltar. It’s short and strong, like Tom Cruise.” Gordon: “There are invariably more dogs than customers there.”

Fave clichéd L.A. place Wall: “I love Santa Monica Beach, and I take every opportunity to get there.”

Watering hole Lawrie-Winfield: “Laurel Hardware is expensive and can be a bit pretentious and wanky, but I like the concept.”

Intimate dining Gordon: “Mignon in downtown L.A. seats about 16 people, and the whole menu is based on cheese, meat and really good wine.”

Current phobsession Wall: “Phonomenal in West Hollywood is the best.” Gordon: “The one in Beverly Hills is really good: 90210pho.”

Pit-stop purchases Lawrie-Winfield: “Cigarettes, a lighter and some nuts to counter the lack of fruit and veg that a diet of backstage tortilla chips and dip provides.”

On-the-road grooming Gordon: “I use this lovely Tree Ranger beard oil. It smells like tea tree.”

Midnight munchies Gordon: “Driving from New York to Toronto last night, we tried to Yelp somewhere, but the only thing open was a Wendy’s drive-through. We couldn’t even sit to enjoy the environment!”

Family circus Wall: “James is ‘band mom.’ He texts us to make sure we’ve got our passports. I have to make sure the equipment is packed just right. Pete is just messy as fuck.”

Drive time entertainment Lawrie-Winfield: “I listen to podcasts – The Moth, NPR, anything soothing.” Gordon: “I load up my iPad with, like, The New Yorker, but I end up dozing.” Wall: “I just look.” Gordon: “It’s true. Basically you meditate for six hours.”

WHAT TO WEAR TO A UTRB SHOW

“Oh My Darling Don’t Cry” by Run the Jewels
“Old Man” by Neil Young
“American Beauty” by Thomas Newman
“America” by Paul Simon
“Number on the Boards” by Pusha T.

READ MORE:
Travel essentials: The best sleep sets
How to experience the unexpected Zen of a staycation
Going beyond the Mayan ruins in Guatemala