New Zealand's fashion, cafés and nightlife are miles away from Middle Earth. 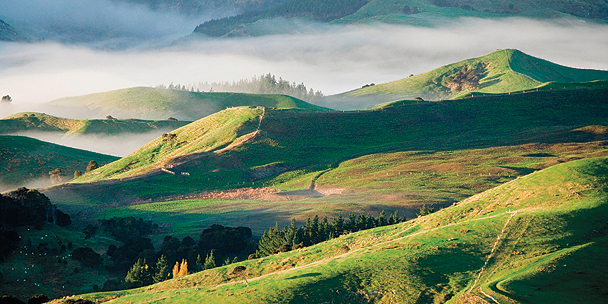 If you’ve seen The Lord of the Rings, you’re familiar with some of New Zealand’s elemental charms: craggy cliffs, glacial lakes and emerald hills. But the country – which is divided into two islands in the southwestern Pacific – is also home to tony restaurants, über-luxe spas and fab shopping. Supermodel Rachel Hunter may spend time in Alberta with Jarret Stoll, her hunky Edmonton Oilers beau, but she’s a loyal Kiwi. “My heart is in many places, but I love my home country and am very proud of it,” she says. The model also raves about New Zealand fashion. “It’s among the most dynamic and progressive in the world.”

Auckland
The scene: In 30 minutes, you can go from the centre of New Zealand’s largest city to a serene island in the Hauraki Gulf, where posh Aucklanders gather from December to February – New Zealand’s summer months. “The vibe is laid-back, relaxed and friendly,” says fashion designer Trelise Cooper, who singles out Auckland’s thriving café culture as her favourite thing about the city.

Where to stay: At Mollies, a 14-room hilltop hotel, where a mix of 17th-century antiques and steel-and- glass furniture creates a Manhattan-loft feel. Sip champers in the salon while tenor and front-of-house manager Jack Bourke belts out tunes from The Phantom of the Opera.

Where to shop: Head to Newmarket and Parnell Village for the city’s best shopping. Celebrated local designers, like Cooper (known for her feminine flounces and luxe silks and satins) and Kate Sylvester (whose trademark is tailored minimalism), have boutiques tucked in between other notable labels, such as veteran Jane Daniels, an inaugural member of the New Zealand Fashion Hall of Fame. Don’t miss High Street, located in the heart of the city, for quirky pieces and jewellery from Karen Walker.Auckland in a day: Start with poached egg and bacon on organic arugula at Bambina, followed by a walk down posh Ponsonby Road. The area’s stylish cafés and jewel-box pastry shops belie its rather seedy past: In 1935, one-third of the neighbourhood’s homes were deemed “unfit for habitation” due to overcrowding, and nearby Victoria Park was once an open-air morgue! But don’t let that ruin your appetite: Try a bowl of local green-lipped mussels at The Occidental Belgian Beer Café . Take a short ferry ride to lovely Waiheke Island, which has more than 20,000 olive trees and 26 wineries. Enjoy a wine tasting at Te Whau Vineyard, which boasts the longest wine list in New Zealand .

Where to drink and dine: The chic set mingle at Dine by Peter Gordon. The New Zealand-born celebrity chef is known for his Five-Spice Cambridge Duck and Kumara Miso Mash, as well as inventive desserts like Warm Pistachio Baklava. Or check out the ultra-exclusive Clooney. This transformed industrial space is so dimly lit, you could be sitting next to the All Blacks – the national rugby team – and not even know it. Hit Shanghai Lil’s Bar & Lounge, where incense burns and stained-glass lamps glow, for post-dinner drinks. “It’s like stepping into another era,” says Cooper.

Getting there: Air New Zealand offers non-stop service between Auckland and Vancouver.

In living colour
When Trelise Cooper started her fashion empire more than 10 years ago, the fashion industry didn’t think she’d succeed. “They thought my clothes were too colourful,” says the Auckland-based designer. Since then, Cooper’s frocks – often embellished with romantic touches of vintage glamour – have won over stylish starlets like Reese Witherspoon and helped launch her namesake lingerie, as well as children’s and accessories lines. Her whimsical label is a contrast to the arch intellectual styling that most local designers favour. “I want to create clothes that have personality and a quirkiness to them,” she says.