One perfect day in Verona, Italy 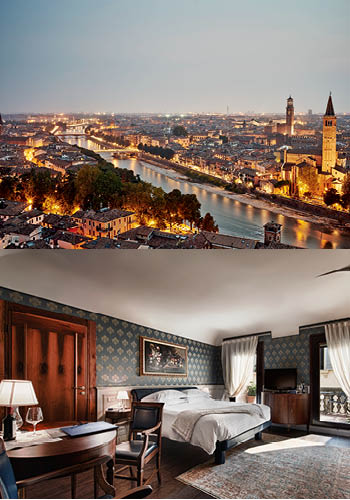 A bird’s-eye view of fair Verona (top); beautiful and historic Palazzo Victoria is in the centre of the old town (below).

The world’s most fam­ous balcony, it turns out, is kind of fake. It is a real part of a 13th-century house in Verona that was once owned by the Cappello family – believed by some to have been the inspiration for Romeo and Juliet’s Capulet family – but the balcony was added by the city in 1936 to capitalize on the famous star-crossed lovers. So there’s no chance that a beauti­ful young girl stood on it some 400 years ago and pledged her love to the boy below.

Still, if you can get past that little lack of authenticity, it’s worth visiting this pretty courtyard in Verona’s historic old town if only to spark your imagination and be awed by the love notes that paper the walls of the tunnel leading into Juliet’s courtyard. Thousands are stuck here every year, and thousands more are mailed to the lady herself from people seeking love advice or simply expressing their feelings. Addressed simply to “Juliet, Verona,” the letters find their way here from all over the world and are received by the Juliet Club, a group of volunteers who translate, answer and file every one.

I didn’t leave a note myself, but it was easy to see why Verona inspired Shakespeare to set his most romantic play here. Just a two-hour train ride north of Florence, Verona is a UNESCO World Heritage Site. Much of its original defensive wall still exists, as does its first-century arena, which is now used for operas and concerts instead of gladiator battles. Locals take pride in maintaining pastel-painted buildings, complementary window shutters and balconies with flowers draping over ornate wrought-iron surrounds. One of the best ways to pass a day here is to simply stroll the pretty streets – you can walk the whole of the old town in a few hours, which is exactly what I did:

MORNING A good place to start is Piazza delle Erbe. Once a Roman forum, it’s now occupied by an outdoor market and cafés. After a latte, I follow Via Cappello, which starts at the southern end of the piazza, to Juliet’s House, a few minutes away. From here, I walk east to the Adige River, which Verona straddles, and meander along its bank. The neat path, lined with old-world lamps, affords beautiful views of the river, particularly where an arched bridge connects to the opposite bank, which is dotted with houses and cypress trees.

AFTERNOON I retrace my steps to Piazza delle Erbe and turn down Via Mazzini, a pedestrian-only shopping street where common Italian and international brands mingle with cool boutiques and gelato shops. (I acquired some Italian-leather boots and a dress with a postmarked-envelope print – both still wardrobe faves.) Via Mazzini ends at Piazza Brà, a vast square with an impressive arena – a slightly smaller version of Rome’s Colosseum – at one end and a curving line of cafés and restaurants overlooking it. It’s so inviting that it’s easy to see why people can’t resist sitting down for a drink or a meal here. So I join the throng for a glass of something sparkly and watch as the sun sets on the arena, intensifying its orangey-brown colour.

EVENING I head to Ristorante Alla Borsa, in Valeggio Sul Mincio, an area about a 30-minute drive from Verona that’s known for its handmade tortellini. Three courses of pasta filled with, respectively, pumpkin, mushroom and spinach and ricotta, all dressed in sage-infused butter, are more delicious than I ever imagined tortellini could be. When I return home from Italy and everyone asks how my trip was, the first thing out of my mouth is “I had the most amazing meal of my life.”

WHERE TO STAY: PALAZZO VICTORIA
Tucked just inside of Verona’s ancient Roman Porta Borsari gate is Palazzo Victoria, a 74-room hotel that started life as a 14th-century palace. The building blends in with its old-city surrounds; all of its historic details have been preserved (which is required by law in Italy), from original wood-beamed ceilings to 15th-century frescoes – my room had a modern-day version: a recessed blue-painted ceiling that was lit like the sky. The hotel’s Borsari 36 restaurant has a partial glass floor so you can look at the conserved Roman ruins below; you can even go down and take a tour.