Finding wellness in unexpected ways and places in Hong Kong 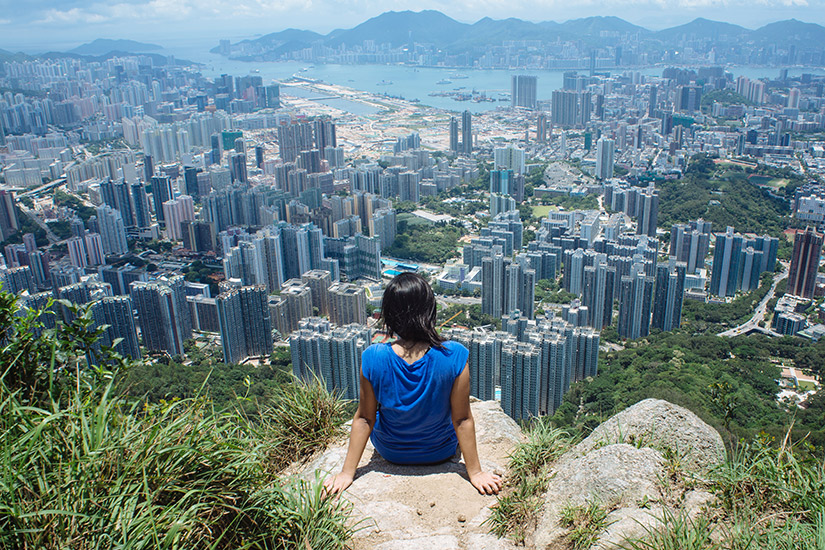 You know those “top of the mountain,” Oprah-esque “aha” moments people have? Well, doing one of the most notorious hikes in Hong Kong wasn’t quite one for me.

For starters, I only made it up about, uh, 750 of the 1,000 or so concrete stairs that scale the first of the two peaks called “The Terrible Twins.” But I can assure you that the revelation I had after climbing that staircase to calf-burning hell was as worthy as anything anyone has ever realized on the summit of Everest.

But first, a bit of background. On this particular late-spring morning, I hiked up the vertiginous slopes that overlook Hong Kong’s scenic Repulse Bay with a group led by a tour company called Sam the Local. (Our guide was actually named Wilson.) By hour three, we’d already climbed Violet Hill via a rocky, scrubby path that switchbacked up from just outside one of the city’s ritziest apartment buildings and through dense bush that seemed so far removed from the bustle of Kowloon, a 20-minute metro ride away.

It was challenging, yes, but manageable in a just-put-your-head-down-and-get-it-done way. After all, nothing makes you recover your breath quite like arriving at the summit to find a group of sweat-free senior citizens enjoying the breeze and pointing out various things to see — Happy Valley Racecourse, the view out across the turquoise Stanley Bay — with no difficulty speaking at all. I distinctly remember asking Wilson if it was (literally) all downhill from here. “Other than a few smaller hills, the worst is over,” he replied.

And for a while it was. Then a few of us pulled ahead (while some of the avowed fitness enthusiasts in the group stayed behind struggling — oh, how smug that made my sedentary soul!), and we slowly descended the mountain, sun on our faces and the sea before us, kept company by a pair of eagles lazily drifting on the thermals. We came to a fork at the bottom of the hill and, after not nearly enough deliberation, merrily took off in what we thought was the right direction, sure that a cold drink and maybe an ice cream were in our very near future.

Fast-forward 45 minutes and I was living my life in increments of 10 — 10 steps, that is: It was all I could manage, in spurts of desperate determination, before catching my breath in great heaves, so thirsty and so, so sweaty in the nearly-100-percent humidity. After that fork, we’d come upon a gentle path through the forest, which turned into a staircase. Because of the way it wound up through the tropical scrub, we couldn’t quite see where it ended. After another 30 minutes of slow, painful climbing, we met the first person we’d seen on this section of the trail — a very fit-looking, very out-of-breath Frenchwoman.

Long story short, she told us that we had taken a wrong turn and were accidentally climbing the most difficult hike in all of Hong Kong — so arduous that she, clearly a seasoned athlete, had only managed to complete it twice before. Awesome.

I’ll spare you the details of my jelly-legged descent, but I will never forget the relief I felt when we stumbled out of the forest and onto a quiet suburban street and spotted a red-and-yellow taxi idling nearby.

But that big revelation I mentioned at the beginning? Well, that really only came about an hour later while I was sipping a bracingly sweet iced coffee on a patio near Stanley Market and staring out at the ocean.

You see, as we were hiking, I had two parallel things running through my head: 1) the mindless earworm of Zayn Malik’s song “Pillowtalk,” specifically the section where he belts “seeing the pain, seeing the pleasure,” and 2) a meditation on what an irony it was that this torture was happening on a trip that had “wellness” as its focus. But as the sweat started to turn cold on my body, the two ideas sort of merged. (Also, the loopy endorphins kicked in.) I thought maybe “wellness” isn’t all aromatherapy candles, exfoliating facials and yoga mantras and that, just maybe, the best kind of wellness is hard-earned. Certainly the accomplishment of climbing that hill — and knowing that I had it in me to do it if I really wanted to — has stayed with me longer than the effects of the (admittedly sublime) foot massage I had the next day.

Not being able to go down stairs without wincing for at least a week afterward? Well, that I could have done without.

The concept of yin and yang is central to traditional Chinese medicine and essentially translates to living so that the “light” (yang) balances the “dark” (yin) in one’s life. Here are a few ways to experience Hong Kong with that careful equilibrium in mind.

YIN That 15-hour flight from Toronto. YANG #treatyoself and fly Cathay Pacific’s Business Class, where, when you’re not sleeping like a baby in the lie-flat bed, the hours will fly by in a happy haze of The Great British Bake Off marathoning on your personal entertainment system and hot chocolates prepared on demand by your cabin attendant.

YIN You’ve overindulged in (totally superb) wok-fried wagyu beef, mango ice cream and Peking duck at the two-Michelin-starred Yan Toh Heen. YANG Stay in the same hotel in which the restaurant is located (the über-luxe InterContinental Hong Kong), and make sure you book a session with its in-house tai chi master, William, who will take you through a restorative, digestion-aiding series of moves from the ancient martial art with the busy Victoria Harbour as your backdrop.

YIN You’re trying to make up for a lifetime of avoiding exercise and rampant sugar addiction. YANG Pay a visit to a Chinese traditional-medicine practice like Balance Health. If you’re expecting a shaman-like practitioner in a back alley, you’re out of luck: This is a modern set-up in a swanky office where you fill out a health questionnaire on a tablet. The methods, however — diagnosing your ailments by feeling your pulse and treating them with a combination of acupuncture and herbs — are ancient and scarily on-point.

YIN You’re worried about bad feng shui, the ancient Chinese belief that a delicate balance must be achieved in one’s living environment to appease the spirits. YANG Hang out in the InterContinental’s lobby. Not only does it have a superb view of the water but it is also one of the best feng-shuied spaces in Hong Kong. According to legend, nine dragons (represented by the mountains around the harbour) come down each morning to drink from Victoria Harbour. Because of the big windows in the lobby, the mythical creatures can fly right through the hotel to get to the water…and conveniently drop wealth on their way past the reception desk.

YIN That 15-hour flight back to Toronto. YANG Arrive early for your flight and spend time in the jade-coloured oasis that is the newly opened Cathay Pacific First Class lounge. When you’re not ordering from the sit-down restaurant or lathering yourself in Aesop products in the shower, book yourself a free foot or hand massage.