Documentary filmmaker Rama Rau travels from the slums of India to Vancouver Island to find out what lengths a mother will go to for her children. 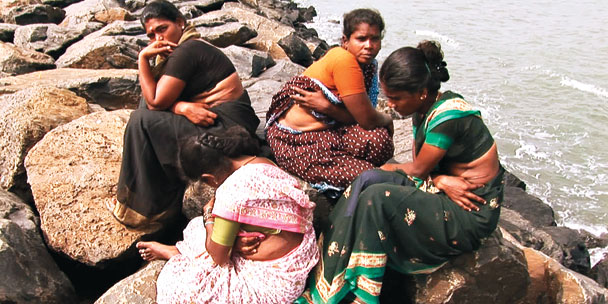 After five years of research, production and soul-searching, I finally completed my documentary film,
The Market. The subject matter-the underground trade in human kidneys in India-is as sensitive as it is complicated. My goal was to find two women-a seller and a potential buyer-who would be willing to share their stories about their struggle for survival. I eventually found them and set out to capture on film how their decisions would affect each other. What I didn’t expect was how it would change me.

As a documentarian, you focus on the story, the people and the conflict. Regardless of whether you’re a man or a woman, you’re an observer. That said, I feel that women view the world through a different lens based on their own unique experiences-motherhood being one of them. My film is about mothers who are forced to make difficult moral and physical decisions due to social circumstances or health. As a mother, I found myself questioning just how far I would go to help my children and what price I would be prepared to pay.

But first things first: Twelve years ago, when I was still living in India, I had three maids, all of whom had telltale gashes across their abdomens. When they casually told me that they had sold their kidneys, I didn’t think much of it. Back then, I didn’t see it as a symptom of a larger evil, but now I can’t believe that we live in a world where buying a body part from someone who is less fortunate is acceptable.

When I think of these women who cared for me-and the fact that I didn’t help them-I feel guilty. When people ask me what motivated me to make this film, the answer is simple: I did it for them.

I want to
raise awareness about the growing organ trade between wealthy Western patients and slum-dwelling citizens in countries like India, the Philippines and Eastern Europe. The kidney trade is brisk because we only need one of them to survive, which means that the second one could be a lucrative commodity-especially for someone who is disadvantaged. In fact, brokers tell the slum residents that even the poorest person has "a couple of
gemstones on each hip." One of those "gems" is worth between $40,000 and $60,000, but by the time the doctors, hospital workers and brokers take their share, the donor only receives $2,000.

The women I interviewed in the slums told me that some men will marry more than one woman so that they have access to the income from two kidneys. Women are also pressured into selling their kidneys to prove that they are good wives. "Let our husbands remain strong," they told me. "They are men; we, as women, should do this for our families."

It’s illegal to broker these deals in India, but it’s not illegal to "donate" an organ. The woman who is selling her kidney must tell the government’s ethical committee that her motivations are altruistic. The exchange of money is then quietly arranged behind the scenes. Her real motivation, though, is to secure money to feed and educate her kids or to help pay down her family’s burdensome debt.

Sensational accounts of people being kidnapped for their body parts receive press from time to time, but, as horrific as they are, I didn’t want my film to focus on those stories. For me, it’s just as horrifying to know that body parts like kidneys are becoming an accepted form of collateral.

I also didn’t take a traditional investigative-journalism approach because I formed relationships with the characters in my film-from the doctor who performs the surgeries to the broker, Prabha, and the seller, Hema. I speak Tamil, so I was able to meet with them in their huts in the slums of Villivakkam Chennai, which is now known as "Kidney Village."

I came to understand their struggles, as well as their dreams. Prabha sold her kidney three years ago to pay off the
family debt. Shortly after, she became a broker. While she usually doesn’t feel conflicted about negotiating a trade (she typically receives $500 per transaction), it is different now that her sister is a client. "Every needle that goes into her body is a needle that goes into mine," says Prabha. "It hurts me so much; it’s like they’re pulling out my kidney all over again. But she needs the money, so how can I refuse to help her?" Hema’s husband isn’t pressuring her; in fact, he’s against it. "I never went to school," explains Hema. "I want my children to get an education so that they can have a better life-that’s why I’m selling my kidney."

But who’s going to buy it? It would have been easy to find a wealthy white character and portray her as the rapacious first-world buyer versus the victimized third-world seller. But instead, I found Sandra, a fortysomething single mom who lives in Nanaimo, B.C., with her daughter, Kylie, and her mother, Christina. Sandra, who has been living with end-stage renal failure since November 2005, is on an active transplant list, but the wait time could be another five years. There are more than 3,500 Canadians waiting for a kidney donation, yet Canada has one of the lowest donation rates in the world (13 donors per million people compared to 20 per million in the United States).

Both Sandra’s daughter and her mother-who has a blog, A Kidney for my Daughter (kidneytransplantforkyliesmom.blogspot.com)-encouraged Sandra to go to India to get a kidney. As her mother said in the film, "I just want Sandra to have a normal life again, feel better about herself, maybe have a boyfriend…" For Sandra, though, the offer of a new chance at life came at a price she wasn’t sure she could live with. "I don’t know, Kylie, you just don’t go buying organ parts from people," Sandra told her daughter in the film. "There are lots of issues to think about. What if the woman selling her organ is being pressured?"

Despite her reservations, Sandra and her family agreed to travel with me to India last summer to meet Prabha and Hema. I didn’t know what the outcome would be, and I told Sandra that I only wanted to film her experience, regardless of her decision. When people watch the film, their reaction to the characters is mixed. Most of them hate Prabha, while others feel that she is being pragmatic, given the challenges she faces. Some can’t understand why Sandra struggles with her decision on whether to buy a kidney, given that it will change her life. "Why wouldn’t she do that for her daughter, just as Hema is willing to sacrifice her kidney for her children?" they ask. There’s no simple answer. I came into this wondering how far I’d go as a mother (would I sell a kidney? would I buy one?), and now I think that it’s impossible to know unless you’re in that situation. The only thing of which I’m certain is that I have signed my donor card; I hope my documentary inspires others to do the same because that’s the only way to close down the market.

For more information on Rama Rau’s film, go to themarketfilm.com.