Jacquie Labatt shines a spotlight on the issue of child rape in Kenya. 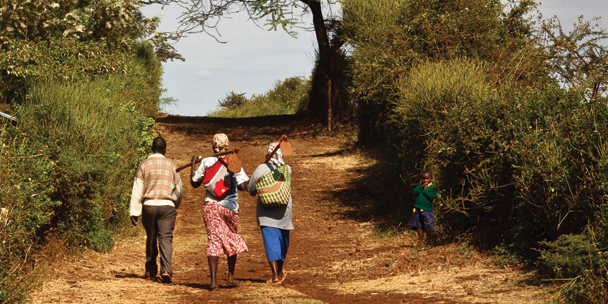 The road that Pauline, a young rape victim, once walked to get to school.

Pauline, 12, grabs the goat’s hind leg, a scuffle that stirs up dust in the dry brush near her family’s hut. Laughing, she concedes defeat after the goat squirms out of her grasp. She will milk it later. Although in this moment she seems like any other Kenyan girl, “Pauline has changed,” says her grandmother. “Now she is always afraid. And her urine does not stop. Something has been affected in the body.” Two years ago, Pauline was raped while walking to school by a man well known to her. The police told the family that they must make a cash payment before they would investigate—a bribe Pauline’s family cannot afford—which is a common practice in Kenya and other parts of Africa.

Pauline’s grandmother explains that other children laugh at her and that teachers say she cries all the time and is unable to concentrate. When she is asked about her “defilement,” the legal term in Kenya for child rape, Pauline’s one-word answers become barely audible. She averts her eyes and lowers her head. Her body seems to close in on itself. But Pauline’s case is not an isolated one. In Kenya, 32 percent of the 18- to 24-year-old women surveyed in a 2010 UNICEF-funded study said that they had been victims of sexual violence as children, and 78 percent of rape cases reported to police involve children, says a 2012 Kenya Police crime report.

I meet 16-year-old Doreen as she sits perched on a wooden chair in her green uniform before heading off to school. “I wanted to kill myself,” she tells me about the rape she suffered at 13. Because her mother was mentally ill and she’d never known her father, Doreen was living with an uncle when she was raped by a cousin. The uncle kicked her out of the home, but Doreen was fortunate enough to be taken in by the Brenda Boone Hope Center Foundation, a rescue centre for young rape victims in Meru, Kenya, which is managed by Ripples International, a charitable organization that runs programs and shelters for children who have been sexually violated. At the centre, Doreen gave birth to a baby girl. Today, this child-mother is the smiling, newly elected head girl at her coeducational school. She has also found her voice to speak out in support of victims of rape.


Writing a new future for WOMEN IN AFGHANISTAN

Doreen and Pauline are just two of the young voices who have inspired Fiona Sampson, a Toronto-based human-rights lawyer. Sampson is the founder and executive director of the Equality Effect, a Canadian non-profit organization comprising experienced volunteer Canadian and African lawyers that provides pioneering legal leadership in support of women and girls. With testimony from Doreen, Pauline and more than 100 other child victims, Sampson and her team filed a constitutional claim in 2012 against the Kenyan government for failing to protect girls from rape.

A journey to SAVE LIVES IN SOUTH SUDAN

“Kenya actually has very good laws to protect our children,” says Mercy Chidi, executive director of Ripples International. The problem, she explains, is that the laws are ignored. But last May, the High Court of Kenya decided in favour of the plaintiffs, known as the “160 Girls,” ruling that police failure to enforce existing rape laws and to protect girls from rape violated domestic, regional and human-rights laws. It was a landmark victory, but Sampson knows that the challenge now is to see that the ruling is enforced.

It’s dawn in Meru. The town is already abuzz with pre-race activity on this September morning. As the sun edges above the horizon, tall shadows cast by elite marathon runners criss-cross the red earth. Dozens of young girls in white T-shirts, arranged by age from four to 17, at first appear overwhelmed by the crowd of spectators and some 2,000 runners. But something in their demeanour suggests that they know they belong, that they are who everyone has been waiting for. Indeed, more than the star athletes, it is these girls, who will participate in a five-kilometre run, who are being recognized at this inaugural marathon event. From the tiniest to the tallest, they are all victims of rape. But today they are change agents, taking on the impunity that surrounds child rape in Kenya.

The day’s significance is in the air, even if it is not fully understood by some of the pint-sized participants. Others, like Doreen, get it. “The marathon is important to me because it gives me some hope that there are people who are there for us,” she says. “It is painful to see such things happening around us and just be told to keep quiet about it. It encourages me that I should not just be silent.”

Citizens stop to read a billboard designed by the BBDO’s Toronto office.

Chidi organized the marathon as a way to raise awareness about sexual violence against children and educate the community about the importance of enforcing rape laws. For over 10 years, she has taken in a steady stream of young rape victims through Ripples International. Many of them have been impregnated; all are forever affected. “Sexual trauma is very difficult to erase in the life of a child,” says Chidi. “If you take a piece of paper and tear it into small pieces, you can glue it together, you can try to stitch it together, you can even try to iron it. But it can never be the same.”

Kenyan human-rights and legal experts say that one legacy of colonialism is that police tend to protect the state more than its citizens. While the recent High Court finding is a significant step forward, political and social pressures are also necessary to effect change, say the experts.

Anthony Kahiga, a veteran police officer with experience in the government’s department of ethics and corruption, blames inadequate police training and insensitivity about children and rape. “There are communities where rape is not exactly tolerated,” he explains, “but at the same time they are not so vehement against those types of offences.” He says that a stolen cow is often a higher police priority than a raped child.

Kahiga notes that cases frequently go unreported as families try to sort things out themselves. Mothers, often dependent on perpetrator partners or relatives for food and shelter, feel forced to “sacrifice” one child to ensure that the others will be fed. Kenyan attorney Muthomi Thiankolu, who argued the 160 Girls case before the High Court, says that girls and women will remain vulnerable to rape until they become economically empowered.

Women in the workplace: A closer look at the CLOTHING INDUSTRY

Because Sampson knows that hope inspired by the High Court ruling could prove fleeting, the Equality Effect is monitoring the police and using all legal means to put them on notice that they must be accountable for their actions. Education and political pressure will also encourage the police to do their jobs.

Part of this effort is a public-awareness campaign (developed pro bono by the Toronto office of the advertising firm BBDO) that will help stigmatize rape and chip away at deeply held social and cultural patterns of conduct. At the marathon, in the city centre, a huge new BBDO-designed billboard, which for a time provocatively proclaimed “Justice is nowhere for child rape victims,” is transformed in a dramatic moment. As Peter Munya, Meru’s governor, applies a slash of pink paint to make the billboard read “Justice is now/here for child rape victims,” he declares: “This is the highest-paid marathon in Kenya so far, and it is to help break the silence against child sexual violence. We don’t want to give any hiding place to people who violate the rights of children.”

The start of the marathon in Meru, Kenya.

Paul Higdon, an American executive who chairs the Ripples International board, sees the efforts in Kenya as a first step to tackling views of rape around the world. “What is being done in Meru is not being done anywhere else in the world,” he says. “The Meru community has had the courage to face their demons, to face the shame. These things exist all over the world, but this community has had the courage and integrity to put it out in the open and talk about it. And it will end.”

Early signs of progress in this fight are starting to appear. Ripples’ Chidi says that recently, an inadequate rape investigation report by police was returned by a supervisor who told the officer to go back and “do his job.” National media provided all-day coverage of the marathon, including interviews with dignitaries about child rape. And quiet little Pauline, whose long-term goal is to become a judge, has vowed to run again in next year’s race because, she says, she wants to help break the silence around rape.

“Kenya has now set the high-water mark for this kind of legal work,” says Sampson. “In fact, the 160 Girls decision has relevance in various international contexts, including in Canada, where human-rights organizations allege that the RCMP in British Columbia failed to protect Canadian aboriginal women and girls from violence, including sexual assault.” The group is now strategizing similar legal battles associated with the lack of enforcement of rape laws in Ghana and Malawi and wants to continue the fight in other parts of Africa and beyond.

Women and CULTURAL TRADITIONS in Nunavut

At the race’s end, the smallest of the girls are lifted up onto the podium area reserved for the day’s champions. There, the elite runners welcome these members of the 160 Girls and honour them as the day’s true celebrities. It is a transformative moment for all present. As Sampson looks on, observing this day of marathon distance conquered by incremental steps, she is encouraged in her belief that “women, girls and men of goodwill won’t stop moving forward until they have found justice.”