Ivvavik National Park reveals a rich look at the land, wildlife, culture and people of the North. 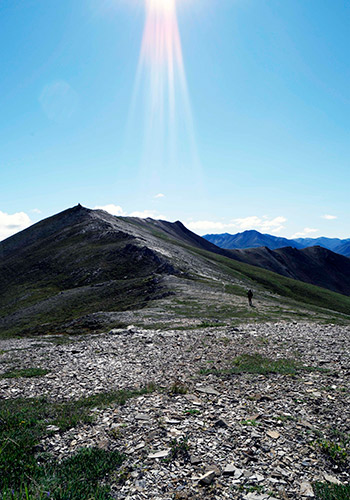 I’ve made it halfway to heaven. Yes, that’s a bit of an exaggeration, but I can assure you it’s an appropriate one. The spot that has been given this lofty nickname is the pinnacle of a mountain 200 kilometres north of the Arctic Circle.

It’s a bit of a scramble up spiky bedrock tors to get right to the top, but I am rewarded with an otherworldly view through a natural rock window. It may not show you heaven, but the view back down to earth is pretty hard to beat: velvety green peaks separated by deep V-shaped valleys, some with striking patches of purple, sage, orange and yellow. It all somehow looks both delicate and severe.

I hiked to this signature spot in the Yukon’s Ivvavik National Park this past summer with the man who named the peak. Mervin Joe is officially a Parks Canada cultural resource management technician, but he is also known as the unofficial mayor of Sheep Creek — the park’s base camp, which is about a six-kilometre hike from where we’re standing.

Joe, an Inuvialuit from the community of Inuvik in the Northwest Territories, came to work at the park in 1993 and has been coming back every year since. One day, while guiding youth campers on a new route, he found himself taking a radio call at this spot. When asked where he was, he replied, “I don’t know, but we must be halfway to heaven by about now.” The name stuck. Since then, he estimates, he has done the hike about 30 times. “I like to show it off,” he says with a grin. “Cloud, rain, snow, people — it’s different every time.”

Thirty times might not seem like a lot until you realize the fly-in summer hiking season here is only from mid-June to early July. Only 113 visitors made it to this park in 2015. Aside from a few fellow hikers and a dozen or so rafters making a 130-kilometre journey down the park’s Firth River, the closest people to us in this 10,000-square-kilometre expanse are those who occasionally pass 40,000 feet overhead.

Partway up our hike, we hear a jet and can see its faint outline as it travels across the clear sky. “Usually there’s a jet trail, but not today,” says Joe. I wonder if any passengers are looking down at us — not realizing there are a couple of human dots looking up at them as they whiz by overhead.

There are no marked trails, which is why you need a guide. As Joe and I traverse alpine ridges and saddles, we sometimes “side-hill” to follow trails made by Dall sheep and porcupine caribou. The 200,000-strong herd of caribou, which migrates through the region in the spring, leaves dozens of intertwining pathways along the steep mountain slopes. Park staff estimate the “trails” are 80 percent maintained by animals and 20 percent by humans.

For one break, we stop in the “sheep’s bedroom” — a spot where the rocky paths are dotted with oval indents that are just the right size for a curled-up ovine. At this point I realize Joe has been whistling the same tune over and over, so I ask what it is. “It’s a gospel song called ‘Go Rest High on That Mountain,’” he says with a glint in his eye. “That’s exactly what we’re doing right now!” I exclaim as we both start to laugh.

Resting in a sheep’s bed with the sun warming my back and a breeze that’s keeping the mosquitoes at bay is indeed heavenly. I’m not in any rush to move. There’s so much to take in, and with 24-hour daylight, I have all the time I need.

BUT THERE IS obviously a lot more to absorb here than the vast, un­glaciated landscape. In 2014, Parks Canada began inviting a cultural host on each trip. Local elder Billy Archie, from Aklavik, Northwest Territories, who had not been to the park area in decades, joins my group of a half-dozen hikers and shares his stories of growing up on the land as well as more ancient oral history tales. “My ancestors used to talk about how woolly-mammoth meat was so tender,” he says one night after dinner. “You can’t capture some of these stories in books.” Camp cook Judy Selamio also shares her experiences of hunting and fishing near Aklavik — and what it was like to first learn English at age 12.

Being able to spend time in this park with the Inuvialuit — which means “real people” in Inuvialuktun — isn’t just a happy accident. The groups that co-manage the park make a concerted effort to give visitors and locals this time to mingle—and to ensure that Inuvialuit have job opportunities.

Although there are many partners involved in these efforts, Nellie Cournoyea and Diane Wilson are two of the key leaders. These women are far apart in age and experiences, but in the three and a half years since Wilson moved to Inuvik, they’ve formed a unique working relationship and a friendship. Wilson, 37, who grew up in 100 Mile House, B.C., and has worked in Vancouver, Halifax and Ottawa, is the Western Arctic field unit superintendent and oversees Ivvavik. Cournoyea, 75, is from Aklavik and has been chair and CEO of the Inuvialuit Regional Corporation (IRC), which co- manages the park, since 1996. She’s also the former premier of the Northwest Territories, a land-claims negotiator and one of the most respected and powerful leaders in the North.

“I was intimidated as hell when I first went to her office,” recalls Wilson. “But I was honest with her. I didn’t pretend I could do this job without a lot of assistance. She just said to me, ‘Let me know what I can do to help.’” The two women often talk three times a week about everything from educational opportunities at the park to infrastructure, and especially staffing, as it’s hard to fill positions in the North. “You kind of need ‘MacGyvers’: people who can fix things with duct tape when needed, drink tea and talk with the com­munity and be patient if a system goes down and they don’t have email for a few days,” says Wilson.

These discussions aren’t always in the office, like the time Cournoyea asked Wilson to help her select fabric for summer amautiit (parkas) she was commissioning local women to sew for the IRC gift shop. She loved Wilson’s purple-and-white-print amauti and wanted something similar for the shop. “It helps to spend time together in the community and have ongoing discussions so it’s not just ‘them and us,’” says Cournoyea.

One of her top priorities is improving life for the youth in her region. “Part of that is to give young people opportunities to get out on the land and talk to them about what sparks their imaginations,” she says.

Her comment makes me think of Rachel Hansen, a young Inuvialuit mother of four and interpretive guide whom I met at the park. When she was growing up in Inuvik, she told me, she didn’t even know what a national park was, let alone that there was one nearby.

But in 2006, after completing a one-year criminal-justice program with a focus on teens at Inuvik’s Aurora College, she saw a poster for a Parks Canada position and landed the job. Ever since, she has been guiding youth camps in the park for Grade 8 and high-school biology students and other vis­itors (like me).

Hansen has grown so attached to her unexpected career that she now has a tattoo of blue Arctic forget-me-nots — her favourite flower — on her right forearm. As we hike to a spot called Inspiration Point, she tells me how her eye often wanders across the nearby Firth River to the still unexplored and unnamed peaks just on the other side. “It’s like a Christmas present just waiting to be unwrapped,” she says.

It’s that excitement and anticipation that keep her here. “I’d love to get to Paris and London, but it’s also amazing to explore my own backyard. I get to know a place really well that very few people get to see.” The possibilities here, like the view, are almost limitless.

BIRTHRIGHT
Ivvavik National Park, which was born in 1984, is the first national park in Canada to be created under an Aboriginal land settlement. It was established to help the Inuvialuit people protect the land, wildlife and cultural heritage of the area while also retaining their ability to hunt, trap, gather and fish. It’s co-managed by Parks Canada, the North Slope Wildlife Management Advisory Council and the Inuvialuit Regional Corporation, which administers the settlement.

In Inuvialuktun, Ivvavik means “a place for giving birth, a nursery.” During the most recent ice age, this region was one of the few in North America that wasn’t covered in glacial ice, making it a natural refuge for woolly mammoths, giant beavers, sabre-toothed tigers and camels. Today, parts of the park are still the calving grounds for the porcupine caribou.

LOST IN TRANSLATION
It’s the fourth day of my five-day hiking adventure, and I’m happy to spend it at the Sheep Creek Station base camp with my fellow hikers and a few park employees. (We’re all glad to give our feet a rest after three days out on the uneven, tussocky terrain.) At the cookhouse, Diane Wilson, the park’s Western Arctic field unit superintendent, is busy decor­ating a cake to celebrate the fact that the base camp, which was built in 1989, is getting a new name at a ceremony today.

Danny Gordon, an elder and hunter from Aklavik who’s also a member of the North Slope Wildlife Management Advisory Council, helped inspire the name change. “Imniarvik,” I’ve been told, means “place where sheep are born” or “meeting place for sheep” — but now Gordon, who arrived this afternoon on a bush plane with other members of the council, tells us it means “the place where sheep are harvested.” (There is a nearby animal-processing site that dates back 650 years.) I look over to Wilson, who, for just a moment, seems to be taken aback by the altered definition. “Translating Inuvialuktun words can be nuanced,” she says with a smile. In the end, though, the official consensus on the meaning is “where the sheep are.”

PARK ART
“As a photographer and painter, I look for geographical features that stand out and appeal to me,” explains Toronto artist Patrice Carmichael just after we’d hiked a 15-kilometre round trip to Ivvavik National Park’s Inspiration Point and Wolf Tors. “I was first interested in this place because animals were known to migrate here to give birth. The landscape feels extremely feminine to me. At Inspiration Point, there are these big mounds that look like pregnant bellies. Everything also has this velvet kind of cover to it, with lots of soft lines. I called one of my first paintings from here The Velveteen Valley. Now, if you look in the guest book at base camp, everybody’s like ‘Yeah, the velveteen valley!’”

HOW TO GET HERE
To reach Ivvavik National Park, you need to take a Twin Otter bush plane. Parks Canada offers one-week all-inclusive fly-in trips from June to early July for $3,375. The 70-minute flight out of Inuvik in the Northwest Territories crosses the Mackenzie River Delta, where countless blue channels fan out and snake their way to the Beaufort Sea. (Have your camera ready!)

What else you need to know: Since there are no trails, interpretive guides lead various hikes. There is also an Inuvialuit cultural host on each trip and a camp cook who will whip up daily feasts that can include caribou soup, Eskimo doughnuts and more. Tents are provided, and, best of all, there’s a new state-of-the-art wash house with flush toilets and hot showers!