A luxe spa resort and yoga retreat perched in the Indian Himalayas is pure bliss. 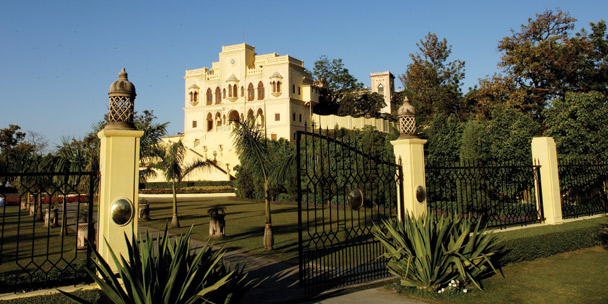 I’m stretching and twisting my body through a set of yoga poses—the half butterfly, the cat, the striking cobra, the flapping fish and the crocodile—but I have monkeys on my mind. The yogi leading my class has pointed out their sounds. They are close by.

Amid the bird chatter and cricket chirping coming from the old-growth sal forest that surrounds the open-air Hawa Mahal yoga pavilion, I can hear the snapping of branches as a troop of monkeys playfully bounce, swing and grunt their way across the grounds of this royal palace-cum-spa, Ananda in the Himalayas, on a mountainside in North India. As I roll onto my back, take a deep breath and stare up into the lotus-flower motif of the hand-painted cobalt-blue ceiling, I feel at one with nature—in a most marvelous way.

It’s fitting, then, that the name of this mecca of mind-body-spirit extraordinariness is Sanskrit for bliss and happiness and that this region is known as a bastion of yoga, meditation and Ayurveda, India’s system of ancient healing. From my suite’s private balcony, there are incredible views of Rishikesh below: Tucked along the banks of the Ganges, this city has been a yoga centre and spiritual pilgrimage destination since long before the Beatles came to the area in 1968.

Today, Ananda attracts the likes of Brad Pitt, Angelina Jolie and Oprah Winfrey. The resort, which opened in 2000, is built around the Viceregal Palace estate of the maharaja of Tehri Garhwal, and it has a mystical quality to it. During his first visit to the then-crumbling palace, Ashok Khanna, Ananda’s owner and founder, remembers it being so foggy that he could only see little bits of the pale-yellow structure—but he recognized its potential.

TRAVEL GUIDE: How to travel like a jet setter

He would soon have it restored and transformed into India’s first destination spa, with 85 suites, three private villas and a 2,322-square-metre spa set on 40 hectares. “The first time I came here, I noticed lotus growing in the area,” he explained one night during a dinner he hosted on the palace veranda. “Lotus has the ability to grow anywhere, and it brings beauty to everything.” He said he decided right then and there that the property’s theme would be the lotus, which “stands for peace and tranquility.”

Well, mission accomplished. This is such an easy place in which to unwind—no detail is spared, right down to the white kurta “pyjamas” that guests are provided with each day to wear around the grounds. But there are so many purposeful, not-to-be-missed relaxation and wellness options on offer that I didn’t sleep in once during my fournight stay. That (7 a.m.!) yoga class with the monkeys? It was not my first outing of the day.

Each morning, I awoke to a just-delivered pot of homemade
ginger-lemon-honey tea before going outside to watch the sunrise. I loved leaving mint-coloured footprints in the dewy grass right outside my suite.

After yoga, I headed to the restaurant’s sal-wood deck, where I sipped fresh-squeezed fruit juice with a breakfast of dosa, a potato-filled rice crepe served with cardamom yogourt and poached papaya. All outdoor meals take place under the watchful eye of a “monkey guard,” whose job is to chase away the mischievous creatures. (When I was first shown around my room, I was advised to keep my balcony door “double-locked” because “the monkeys have a sweet tooth.” And not just for my room’s fruit bowl—they’ve also been known to snatch a beer from the mini-bar!)

Late mornings and early afternoons were filled with
spa treatments, including the signature Ayurvedic Abahyanga massage, which is 90 minutes of synchronized four-handed heaven. The young women who performed mine had been working together for several years, and their timing and pressure equalization were gold-medal-worthy. What made the experience even more meaningful was the perfectly harmonized prayer they sang before the treatment. Created by a well-known guru in Rishikesh, who wants to remain anonymous, the prayer is sung to
clean your aura before starting any physical Ayurvedic treatment. “This is one of the things that make Ananda unique, so please don’t reveal it,” the spa manager said to me later when I inquired about it. “For us, it would be like revealing the secret recipe of KFC or Coca-Cola.”

Another morning, I trekked with a guide up through black bamboo, curry plants and sweet corn to the Kunjapuri temple, where I could just see past six hazy
layers of mountains to the snow-covered peaks of Tibet and China. In the afternoon, I attended a Vedanta lecture—which Riaz Anand, the general manager’s wife, characterized as “Let’s get down to this extraordinary
understanding of life”—and then a guided meditation session. One evening, a group of us headed down to the Parmarth Niketan Ashram, along the banks of the Ganges, for the nightly fire ritual, the purpose of which is to give thanks to the river.

Back at the resort, we finished the night with an alfresco dinner in the music pavilion. The walkways leading to the pavilion were bordered with rose and marigold petals arranged into artistic rangoli patterns and lit by brass diya oil lamps. A sitar player serenaded us from a floating platform on the reflective pool beside the pavilion. It was almost too much to take in. Oprah Winfrey summed it up best in the resort’s guest book: “Ananda is a gift. And a blessing!” she wrote. “I can hardly wait to return.”

Neelam Khanna, who co-founded Ananda with her husband, Ashok, was also instrumental in bringing Hermès to India. Jean-Louis Dumas (who passed away in 2010), a close friend of hers and the brand’s former chairman and artistic director, convinced the Khanna family to form a joint venture with
the French luxury brand to bring stores to India in 2008. In 2011, they opened a flagship in Mumbai— the country’s first stand-alone luxury boutique. Neelam still has the limited edition emerald green double-muslin Hermès sari that she wore to the first store opening. “It is most elegant,” she says. “I have a lot of international influences in my life, but I am extremely Indian in my way of dressing. I don’t wear Western clothes—I’ve never worn a dress.” She does, of course, carry a Birkin.

PARIS TRAVEL GUIDE: How to travel like a fashion editor

Not only does 4.5 percent of Ananda’s revenue go toward cleaning up the Ganges and local reforestation efforts but the resort also supports Ramana’s Garden (ramanasgarden.org), an orphanage and school in nearby Rishikesh. Founded by American Maggie O’Hara (who also goes by her Indian name, Prabhavati Dwabha) more than 30 years ago, the site is a mosaic of small buildings that house school rooms for 167 children and dormitories for 67 orphans, as well as vegetable gardens and a non-profit café.

There is also a studio where the children learn classical Indian dancing; some of the most talented pupils put on an evening show in Ananda’s stone amphitheatre once a week. The dancers I saw perform, with big smiles and embroidered costumes, were so radiant and enthralling that a group of us staying at the resort headed to the orphanage the next day to learn more about their lives. As we visited each classroom, O’Hara told us that the power grid goes out four or five times a day, they don’t have enough room to accommodate all the children in need and there are always more mouths to feed. The challenges seem almost insurmountable, yet, as the children performed the song “We Shall Overcome Someday” for us, I got the sense that, with continued help, they will.