The iconic, crave-worthy Hermès scarf is more than an accessory; it’s a sartorial rite of passage. 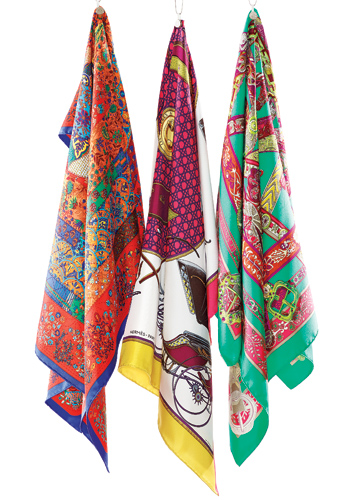 Henri d’Origny is perhaps even more colourful than the scarves he has created for Hermès for the past 55 years. I had a chance to witness the delightfully irreverent master flirt hold court between jumping events at the Saut Hermès competition in the Grand Palais earlier this year. In addition to 40 carrés, d’Origny has designed 1,000-plus ties and more than 20 watches, including the Cape Cod, with its now-iconic double-tour strap. “You know, my life has been a succession of indecent chances,” he says, laughing. “I first met Patrick [Guerrand-Hermès] in boarding school. Later, when we came back from our military services, we met again in Paris. I was trying to make a living designing, and he suggested I visit his uncle and his father. They said my designs were okay, but they weren’t for Hermès. They asked me to propose some new things. They liked them, and that’s how I started. I never call what I do work, because I’ve never done something I haven’t wanted to do, which is a fabulous privilege— especially with a house like Hermès.”

VIDEO: How to tie an HERMÈS SCARF

Art school: “I have been drawing since I was a little boy. I was very undisciplined. I never studied art—or anything. That’s also indecent!”

Hip to be square: “I’m not a cubist at heart, but I’m very graphic. All my designs are symmetrical and balanced. It’s not my style to have a totally free hand. I need the discipline of a frame to work.”

Letting go: “You do the design—you give it to the artistic director; he buys it and then it’s over. No designer at Hermès is allowed to say a word about the coloration of his project. The design is your child, but you are not in charge of her education! I don’t get attached to any designs; they live their lives, and they don’t have to call me ‘Daddy’!”

VIDEO: How to wear a SCARF IN YOUR HAIR

Style statement: “Scarves add a little fantasy to a woman’s look, but I don’t think about those things. I know that what I create is meant to please someone, but I don’t know if it’s fashionable. That’s the artistic director’s job.”

Mantra: “For me, life is pleasure. Life without pleasure is not worth living. And I hope death is pleasure— otherwise I refuse to die.”

3. The
Hermès scarf: Carré on!

We travelled all the way to the Hermès factory in Lyon, France, where the iconic scarves are made.

Time machine
The artist creates a mock-up of the scarf, and an engraver traces the work onto transparent films that correspond to each colour. A scarf with 30 shades can take between 400 and 600 hours to engrave.

Colour story
The artist doesn’t determine the colours—that’s up to the colourists, who choose from more than 75,000 different shades to create up to 10 different versions or colourings.

Handiwork
One of the distinctive features of an Hermès scarf is its rolled (roulotté) hem, which is done by hand. An experienced roulotteuse takes 30 minutes.

4. The silk trail to the Hermès scarf

The first carré, created by Robert Dumas in 1937, was called Jeu des Omnibus et Dames Blanches. Since then, more than 1,500 designs have been created by the 100-plus artists.

Great lengths
It takes 450 kilometres of silk thread to make one carré, which means that the length of thread in 1,000 Hermès scarves is equal to the distance between the earth and the moon.

Quality control
There are three things to look for on every authentic Hermès carré.
1. The artist’s signature.
2. The Hermès-Paris copyright.
3. The name of the scarf.
–Kamel Hamadou, communications manager

Rules of engagement
1. “Don’t respect the carré: Dare to crease it, to treat it a little roughly.” 2. “Play, invent, try things out.”
–Maria Schaefer, head of women’s silk collections

Road show
If you’re in Toronto from October 2 to 6, visit the Festival des Métiers at the Design Exchange to see first-hand how Hermès artisans work.