Dubai: It doesn't get more luxe than this 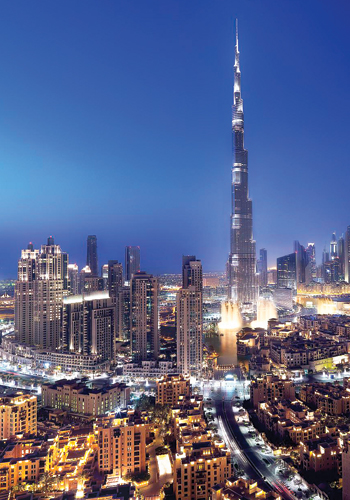 In Dubai, you quickly discover that if something isn’t the first, the biggest or the most expensive, it doesn’t belong here. This is a place that lives up to its billing as “the city of superlatives.” The skyline – with its grandiloquent collection of glass skyscrapers – has a Jetsons-like futuristic vibe. But instead of flying cars, the highways are lined with Lamborghinis and Ferraris. The Dubai police even cruise around in $300,000 McLaren sports cars. As one of my taxi drivers said: “You have to be really rich to not feel really poor in this town.” To commemorate my week-long adventure in this Arab kingdom, here are five personal records that I racked up. Consider them your top 5 Dubai bucket list.

I smiled when I recently read David Owen’s “Game of Thrones” article in The New Yorker about how airlines cater to the 1 percent. He recounts his inaugural adventure in first class and how he didn’t want to look like a “front-of-the-plane rookie.” I know what he means. When I learned that I was being upgraded from business (I know, cry me a river) to first class, I had to resist doing a fist-pumping victory dance. The fact that I was travelling with my new boss – who wasn’t getting an upgrade – also tempered my OTT enthusiasm for this unexpected glimpse of life as a 1-percenter. Owen writes that it’s not unusual for people who travel long distances in high style to consider the flight the best part of the trip. I couldn’t agree more. When I think of my time in Dubai, it’s the 15 hours I spent on the flight getting there that tops my list of memorable moments: the cocktail bar, the on-board Wi-Fi and the suites – I mean first-class seats. Owen describes them as “bedroom-like micro-palaces.” When I blogged about the experience, I described my fluffed and feathered nest – with its shuttered doors – as “an adult bassinet with ultra-luxe gold and marble finishes.”

Then there’s the on-board shower. Yes, shower. Emirates is the only passenger airline that offers such rock-star indulgence, and I was only too game to experience a five-minute shower at 40,000 feet. The spa-like setting is the size of a small galley kitchen, complete with heated floors and luxe Timeless Spa products on display. When I emerged, there was an attendant waiting outside to offer me fresh fruit and hot ginger tea. Only then did I notice a woman, wrapped in a blanket, standing against the wall at the bottom of a flight of stairs that were cordoned off with a velvet rope. She had that distinctive – oh, I know it so well – economy-class look of a poor wretch who hadn’t slept a wink. I slipped back into my gilded oasis, knowing full well that I was an interloper on borrowed time.

2. MY FIRST DUNE-BUGGY CAMEL RIDES IN THE DESERT

I’ve ridden a snorting, snot-flinging elephant in Nepal and, more recently, a feisty mule as part of a four-hour extreme adventure in the Mexican jungle – but it took only a brief ride on a one-humped ungulate to reacquaint me with my long-dormant oblique muscles. #ouch. According to my Jeep driver, a “Bedouin massage” would work out the kinks. For those of you who haven’t been on a desert-dune-buggy ride, that’s the jolts and jabs you experience as the Jeep lands on two wheels after catching a little air. I had signed up for the “hard ride” because the “soft ride” was for wimps. When I asked him where he learned to drive, he laughed and said, “In my bedroom…on Nintendo!” A few days later, my obliques, quads, triceps, glutes – you name it – were put through the paces with Burj Club trainer Thomas Woolf. I tried to distract him by getting him to talk about his crowdsourcing site for charity (justgiving. com), but he saw through that ruse fairly quickly. “I know what you’re doing, Noreen – get moving.” Busted!

After our session, I headed to the Armani Spa to experience my first (and quite likely my last) Thai massage. My therapist was lovely and talented – it was my body that wasn’t interested in being bent out of shape or walked on. “You should stick to deep-tissue massage,” she said, clearly flummoxed by the human two-by-four lying on her mat.

I had requested something “minimal” and “architectural” with straight lines. The artist looked at me, paused and then started to draw intricate swirls, dots and paisley shapes. Less is more – Middle Eastern-style.

Atmosphere lounge during high tea – you still get an impressive view of the desert and the nearby Arabian Gulf. You can also spot some of the world’s most expensive handbags on the arms of women wearing black abaya robes and hijabs. There are Birkin bags (yes, plural) and Chanel 2.55 flap bags too numerous to count. After tea (and bubbles), I went two floors above to the outdoor Observatory Deck (the highest in the world) and asked a guide whether they really had violent dust storms like the one that engulfed the tower in Mission Impossible: Ghost Protocol. “Only in the movies!” he said, laughing. “You mean this city was trumped by Hollywood hyperbole?” I replied. After snapping some vertigo- inducing photographs, I made my way to the elevator. Five men, dressed in impeccable long white tunics and equally pristine white kaffiyeh head scarves, joined me. “They must have fixed the noise problem; it’s quieter now,” one of them commented to his friends as we whizzed to the bottom in the fastest double-decker and longest elevator in the world. “Was it very noisy?” I asked. “Oh, yes, it used to sound like wire being cut.” Gulp.

The 7 essentials you need to sleep on a plane

Staying at the Armani Hotel in Dubai is a stark reminder of how a minimalist aesthetic is such a Western sensibility. Giorgio Armani, in particular, is a master at understated elegance, whether it’s his fashions or his posh hotels. “When we first opened, people weren’t sure how to react,” explained Shona Mac Sweeney, director of marketing and communications for the hotel – which is located at the base of the Burj Khalifa. “Guests kept asking us if it was finished. When they pay for luxury, they expect golden opulence. It has taken some time – and some education on our part – to explain why this is luxurious in its simplicity.” The meal I had that night in Armani/Ristorante, however, was anything but simple. The seven-course truffle-themed menu was a deliciously complicated, unexpected medley of flavours with earthy black and fragrant white truffles as the star ingredients. The highlight? The Mont Blanc sphere with marron confit, caramelized pear, meringue and white-truffle ice cream. The next day when I was checking out, the doorman informed me that they would be bringing the Bentley around to pick me up. I’m practically car illiterate, but even I know that a Bentley is a posh ride. “What a beautiful car,” I remarked to my driver. “Yes, it’s only for beautiful women to ride in.” (These wheels may cost more than $200,000, but flattery at 6 in the morning is priceless.)

AN INSIDER’S GUIDE TO DUBAI: Fendi’s Kate Barry on her adopted home

My first impression of Dubai was that it’s Vegas without the neon. But this, like most superficial assumptions one makes while travelling, was incorrect. After meeting with Kate Barry, a fashionable transplanted New Yorker, I sensed a genuine camaraderie that has its own charming allure. “Dubai is happy camp,” explained Barry, whose day gig is being the communications manager for Fendi, Middle East. “In major cities in the West, guests don’t just pop in for a coffee – it’s perceived as invasive or inconvenient. In Dubai, it’s normal. In New York, I felt like people thought being jaded or stressed was just what you had to do in order to ‘be a New Yorker.’ There’s a dynamic, positive energy here. It’s a city full of pioneers. I always speak of Dubai with a big smile on my face.”

I arrived 30 minutes late for my interview with Rami Al Ali – Dubai’s most esteemed couturier – and I was feeling guilty. “The cab driver couldn’t find the atelier,” I offered up sheepishly. “Please don’t worry,” he said. “It is a problem for us too. There’s always a new road. Things are built so quickly in Dubai that using GPS isn’t helpful.” With the grace and good looks of a ’40s film star (think of a young Humphrey Bogart in Casablanca), the Syrian-born designer ushered me into his showroom for a chat.

How do you blend Western and Eastern aesthetics into your work? “Dubai naturally takes you in that direction because of the versatility of the town. It’s Arabic, but there is a strong Western lifestyle. It’s very global.”
Do women approach fashion differently here? “Yes, women dress for women. When you dress for a man, it’s all about your character. When you dress for a woman, it’s more about your social status. The women here are harsh judges of another woman’s fashion. They see things a man wouldn’t notice.”
How did you develop the same rigorous eye as your clients’? “I was surrounded by women when I was growing up, and I would listen to how they described or criticized other women’s outfits after they’d been to an event.”
Did you always want to be a fashion designer? “No, but I always understood the importance of clothes. The way you appear is your business card – even if you don’t acknowledge it or say you don’t belong to a fashion crowd. You still choose clothes to deliver that message.”
What do your pieces telegraph about a woman? “That she’s highly educated when it comes to fashion and that she wants to be unique and different.”
What design era is your favourite? “The ’40s and ’50s, because it married fashion with cinema.”
What’s your fave fashion film? “High Society with Grace Kelly. For some scenes, I put the volume up so I can hear the sound of the fabric when Grace moves and you hear the organza touching the furniture. It’s beautiful.”