6 things to know about the new St. Regis Toronto 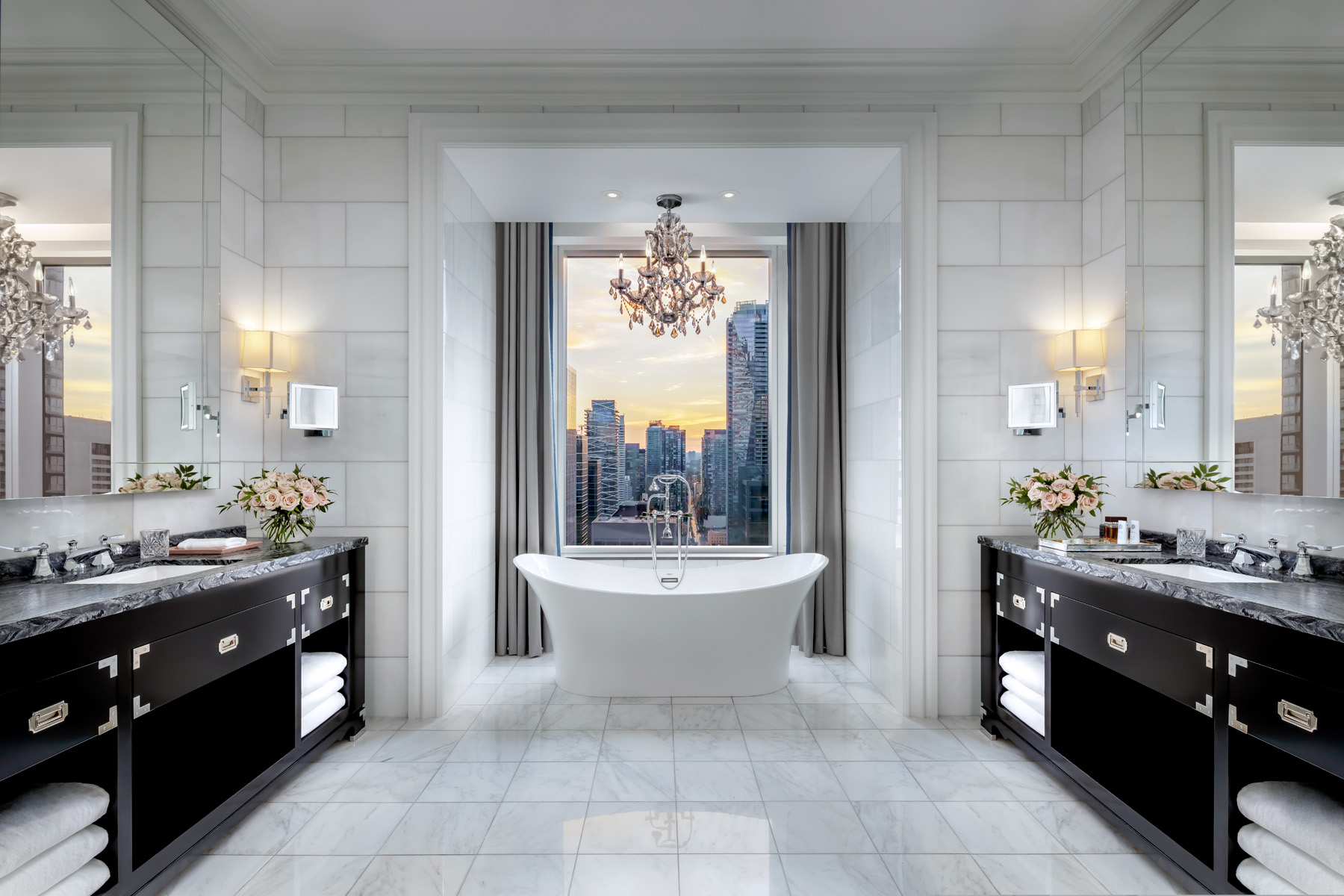 The St. Regis was founded by John Jacob Astor IV—one of the wealthiest men in America—in New York in 1904. There are now more than 40 properties around the world, including the new St. Regis Toronto at the intersection of Bay and Adelaide streets. To this day, Astor’s influence is taken into consideration when selecting cities, hotels sites and designing the interiors. “For every location, we think, ‘what would his home look like if he was travelling here?’” says Suzanne Cohen, vice-president luxury brands, Americas at Marriott International. “In Toronto, if he had a pied–à-terre here, it would be in this beautiful, modern glass building in this skyscraper city.”

We highly recommend Louix Louis, the restaurant on the 31st floor. It’s all amber coloured with bevelled walls and panelling and feels like you’re inside a tumbler of whisky—which is the point: the spot has one of the largest collections of brown spirits in Canada. You may be distracted by all the bottles that line the walls of the two-storey bar and restaurant, but don’t forget to look up. The swirling mural on the ceiling was designed by local artist and ELLE Canada contributor, Madison van Rijn.

✨ NOW OPEN ✨ Toronto’s first two-storey high #grandbar and restaurant located on the 31st floor @StRegisToronto, overlooking downtown #Toronto and Lake Ontario. Bold, glamorous, soulful and inspired by our past as the world’s largest distillery, the grand bar features one of the largest dark spirit collections in Canada with the striking design reflecting the inside of a crystal whiskey glass. Book now through OpenTable. #NewEraOfGlamour #LOUIXLOUIS #LiveExquisite

Like all St. Regis properties, guests at the Toronto location have a personal butler. Our fave part of butler service? The packing and unpacking service–they will hang and fold up your luggage and repack everything when it’s time to go.

Each St. Regis has a signature Bloody Mary, inspired by the city it’s based in. Toronto’s is called the “Rouge 140”—an ode to Canada’s French roots and the 140 languages that are spoken in Toronto. It includes soy, oven-roasted red pepper, tomato juice, chili and a special blend of spices.

5. Stay tuned for a new and improved spa.

The two-storey spa located on the top floor of the hotel is undergoing renos in 2019.

6. Jason Wu is an ambassador

Well actually, his official title is St. Regis Connoisseur. He’s been working with the brand for almost a decade, and he hosted a “midnight supper” in Toronto on opening night. (John Jacob Astor’s mother, a grande dame of New York, Caroline Astor used to host grand parties at the hotel and then invite a select few to these decadent, boozy late-night feasts.) His favourite things? The spa and the butler service. “Unpacking is the best because no one wants to unpack and no one wants to pack!” he laughs.