It’s been a whirlwind festival of films, star spottings and the best events of the year. Our insider—who, in the name of accuracy, attended parties every night—selects TIFF’s top five parties of 2012. 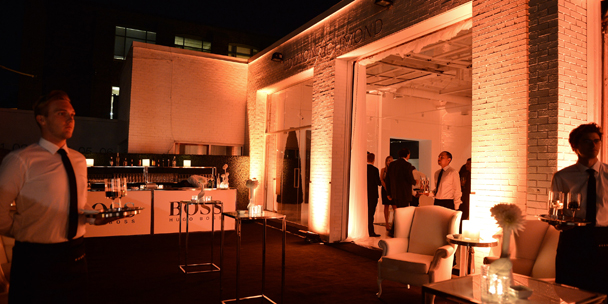 The highlight: Agyness Deyn breezing in and out.

Number of outfits tried on and rejected: 3. The winner was a short and twirly Chanel cocktail dress hiding in the back of my closet, good for a party where you don’t want to look like you’re trying too hard.

When it comes to film festival parties, the Weinstein brothers know how to throw an event that will have media buzzing about it days before, and guests chattering about it weeks after. For this year’s TIFF, The Weinstein Company rolled out the red carpet for fashion darling and aspiring Holywood starlet Agyness Deyn’s premiere feature, Pusher with the help of their friends at Bungalow 8.

The late nightspot of the early 2000s (immortalized by Sex in the City when Carrie befriends a man with a key to the exclusive members only club), founder Amy Sacco transported a little piece of New York to the Thompson Hotel’s rooftop lounge.

Signature bites including grilled cheese served with ketchup were gobbled up by ladies and gents in coolly formal cocktail attire, while champagne flutes were emptied with grace and speed alike.

Sacco was seen greeting celebrity guests including director/actor Eli Roth (Inglorious Basterds), who popped into the party with a shy-looking Sky Ferreira. Dressed in a rocker leather jacket over top a black lace dress with bleached blonde hair casually pulled back, the model/singer kicked up the party’s hipster’s factor. The too-cool-for-school vibe already lingered in the air though, with Giovanni Ribisi (Ted) and his beautiful new bride and woman of the hour, Agyness Deyn, having just come and gone. Brief though it was, Deyn’s quick flutter about the room was enough to jolt the party’s mood and keep guest lounging till the wee hours of the morning.

The highlight: Getting a quenching taste of the good life.

Number of jolly drinkers vs. number of casual sippers: 5 vs. 0

A TIFF establishment, the Grey Goose Soho House is a stargazers paradise, and one of the hardest guest list spots to score during the festival. From hosting the cast of Looper including Emily Blunt, Bruce Willis, Joseph Gordon-Levitt and Noah Segan on opening night, to seeing guests including Keira Knightley and Jude Law— in town for the world premiere of the historic drama Anna Karenina, as well as A-listers Bradley Cooper and Jennifer Lawrence (whose new dark brunette ‘do made all take a double take) — stars of gala presentation Silver Linings Playbook, and cool kids such as Kristen Stewart (On the Road), Andy Samberg (Hotel Transylvania), Michael Pitt (Boardwalk Empire) and Aaron Paul (Smashed) — lounging on their cozy leather couches, it’s hard to not give the Grey Goose Soho House the honour of calling it the preferred celebrity hangout.

A bit like what one imagines an Oscar’s after party might be like, the scene at the Grey Goose Soho House is a celebratory one where glasses are never empty of delicious mixed cocktails, stars unwind amongst themselves, and stunning screen stars like Gemma Arterton and Saoirse Ronan can be seen chatting and giggling together. Both Ronan and Arterton were in town for the premiere of their vampire drama Byzantium (also featuring star-to-watch Caleb Landry, seen as well in festival select, Antiviral), and win the prize for Best-Dressed with Arterton looking especially gorgeous in a simple white camisole matched with a floor length black skirt, dark nails, and this fall’s preferred mulberry lip. As one of the pair of female vampires unleashing terror on the English countryside in Byzantium, her ultra-feminine take on gothic glamour was most fitting.

For more of our TIFF party report, read on to the next page…

The highlight: Realizing just how tall Bill Murray really is.

Number of outfits tried on and rejected: 1. The winner was an above the knee, form-fitting floral-patterned dress by Top Shop that kept things dressy but fun.

As someone who lives in Toronto, it’s always strange when you see the names of places you don’t recognize on TIFF party invites, especially when it’s repeatedly. This year’s surprise came in the form of Patria, a new Spanish restaurant in the city’s King Street West area that had yet to even open to the public before serving the celebs of such TIFF films as Seven Psychopaths and On the Road.

On the particular night I got to check out the space, the venue was hosting Zaytoun, the festival Special Presentation starring Stephen Dorff as an Israeli fighter pilot, who finds himself stranded in Lebanon after his plane is shot down.

The scene at the Zaytoun-after party started slow and picked up pace once Dorff and entourage strode in. Dorff — dressed in a Rat Pack-esque slim tailored black suit — looked the part of the rebellious Hollywood comeback kid with a smirk and furrowed brow worn all night, reminiscent of his Somewhere character. The party was already in high gear when actor Bill Murray — at the festival for his latest feature Hyde Park on Hudson — arrived, though his presence undeniably infused the room with buzz as the crowd shifted to the front of the restaurant where Murray spent the evening hanging out at the bar. Murray mingled with guests and happily took pictures with fans; maybe it was his leather blazer, but there was something about the actor that made him approachable in the best of ways.

Number of outfits tried on and rejected: 2. The winner was a pale pink lace dress with peak-a-boo back by BCBG, ideal for a sophisticated cocktail soiree.

When it comes to the world of TIFF after-parties, if the honoured guests stay longer than an hour, the party host has done a good job. If they stay past midnight when the party started at 9 p.m., the feat of the host moves into the realm of the exceptional. As the attendees at the post-premiere party for To the Wonder know, Hugo Boss has a knack for pulling off the pleasantly extraordinary.

Hosted in honour of director Terrence Malick’s TIFF Special Presentation, this was a party that reached the upper tiers of extravagance all in the name of a good time. Serving up lobster poutine and mini truffle grilled cheese, the delicious savouries were washed down with champagne and Avión tequila by partygoers in a merry mood. To the Wonder star, Rachel McAdams, looked a true Hollywood lady when she made her entrance in a asymmetrical Elie Saab gown. The actress made herself at home with boyfriend actor Michael Sheen. The two cozied up in a seating area by the DJ booth, where they stayed till past the witching hour.

For more of our A-list TIFF party report, read on to the next page…

The highlight: Suits bobbing their head to Jason Collett performing “I Wanna Rob a Bank.”

Number of outfits tried on and rejected: 3.The winner was a short A-line black racer back silk dress by Nomia that kept things casual, but with a touch of TIFF glamour.

Number of jolly drinkers vs. number of casual sippers: 2 vs 3

Number of celebs spotted (aside from the ones onstage): 2

The Festival Music House (FMH) opens its door at a time during TIFF when festival-goers are hitting a wall, and need a change from late night parties where cocktail attire is a must. There are only so many nights a girl can handle 4-inch heels till 4 a.m.

Gathering up the best of Canadian talent, this year’s FMH lineup — hand-picked by the Arts & Crafts record label — ranged from up and coming talents such as electro indie-rockers Young Empires, who’s debut EP, Wake All My Youth, was released just this year, and veterans like Halifax’s folk-loving Wintersleep, who won a Juno for Best New Group of the Year back in 2008. On the third day of their concert lineup, the Mod Club had a relaxed vibe circulating through the room, something of a collective sign of relief exhaled by the tired guests — many with official TIFF badges still hanging from their necks. With everyone basking in the mellow of FMH, and with the guys primarily in flannel and the girls in ankle boots, opting for an Amsterdam beer here over a vodka soda seemed in order.

Canadian rockers including singer/songwriter Hayden and Broken Social Scene alum, Kevin Drew were seen out in support of Jason Collett (also formerly of Broken Social Scene), who’s down home approach to rock sang the crowd into an easy going party mood. Later into the night the pace picked up with hip-hop group, Grand Analog taking the stage, shortly followed by Young Empires, who packed the dance floor with up-tempo electro beats. Rocking the denim hard — think vests — the boys of Young Empires were a heavy enough dose of hipster to balance out the preceding six days of festival glamour-pussing.