An account of why the men we don't look twice at may indeed deserve a second glance. 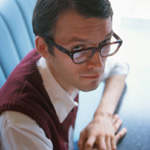 My friends, mixed with a few drinks, often fall into a conversation where they sort men by archetype. Like experienced poker players, they rank them and trade up. In this world, jocks beat geeks, accountants top artists, and metrosexual doctors take all.

But if you looked around this circle, you’d find women whose strengths are their quirks. There’s the loud girl, whose uncompromising attitude makes her the centre of attention, having the most fun. She’s flanked by the perfectionist, with her enviable career and the commitment-phobe who’s still waiting for someone good enough.

In their rush to win, women have been trying to stereotype their way to happiness. But maturity brings change. Lori Miller, spokesperson for Lava Life, points out that “as women date men like doctors, they realize it’s not all it’s cracked up to be and become more openminded.” I’d like to capitalize on that and ante up the forgotten men — The Underdogs.

The amateur artist
Last seen: in his parents’ basement
At his best, he’s a starry-eyed optimist who believes he’ll be a star, is adequately talented and has a sensitive soul. He won’t panic when you cry, or tell you to buck up when you’re fired. Social and easy-to-please, the amateur artist’s live-your-dreams, no-compromise, anti-corporate position will give you the optimism other people claim to get from children.
He’s for you if: You’re frustrated with your office job.

The bad boy
Last seen: smoking out back
This man gets too drunk, hates your friends and thinks that privacy is overrated. But to a certain extent, so do you. This is the guy who says — and does — what you wouldn’t dare, taking you along for a self-centered spin. He’s a reminder that being aggressive can be a good thing. Unfortunately, as soon as he’s comfortable, he’ll treat you the way he treats everyone else.
He’s for you if: You wish you could be back in high school — for a few weeks. The slob
Last seen: sniffing a dirty shirt
My personal favourite (I have been known to be filled with lust for a man who throws his trash onto a “garbage pile” in the corner of his bedroom floor), this is a guy with better things to do than wash dishes and vacuum. This is vital — do not mistake him for The Sloth. Crazy and spontaneous, his carefree attitude will remind you to prioritize and do what makes you happy.
He’s for you if: You’re starting to skip breakfast to clean.

The bartender
Last seen: as your best friend’s ex
He’s the perfect date — a handsome, chivalrous flirt. The first bartender you meet will break your heart. But after you’ve learned his limits, there’s no reason he can’t provide the best nights out. He loves to party, can get you into all the late night hot spots and is practically a professional between the sheets. What more could a girl want? As long as it’s not commitment, this man’s The (in between-boyfriends) One.
He’s for you if: You’re on the rebound.

The geek
Last seen: selling you a computer
After spending many years as the underdog, the geek is on the rise. Miller says the geek is gaining in popularity. The geek is curious about everything, including you, making him an attentive and smart conversationalist. And many geeks hit their primes in their 20s when they find great jobs. “They’ve started their own company, they’re motivated, independent and women are finding that sexy,” says Miller. “That traditional geek label is now a cache.” A friend of mine was whitewater rafting in Switzerland when she found geek gold — NASA employees. Those men build spaceships, girls. Spaceships.
He’s for you if: You read science fiction as a kid.

The T-shirt and jeans guy
Last seen: fixing your car
This underdog has been wearing a hat to cover his mullet for a while now. He’s not worried about how he looks and it’s this confidence that’s so attractive. This is a man who wouldn’t be caught dead shaving his chest. There’s also a good chance he’ll be fairly lax on what you should be wearing.
He’s for you if: You’ve never tried to turn a gay man straight.

Really, it doesn’t matter which one you pick. All of the above will expand your definition of perfection — and there’s a good chance he’ll forgive your quirks, as well. Which will leave you as The Happy Girlfriend (last seen: in your favourite comfy sweatpants).