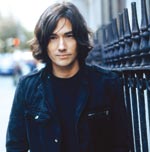 “Lyrically, I think there’s a theme to the record,” says David Usher of his fifth and newest solo album, Strange Birds, due out March 20. “The theme definitely has to do with finding your place within your own world, which is finding your place in your neighbourhood, which is I guess what I’m doing down here.”

Usher now lives in New York City, specifically the East Village, where he has found tons of lyrical inspiration for such songs as the vibrant first single “The Music” and pitter-pattery “Spotlight On.”

“But that relates to bigger things as well,” he says of the theme. “It’s trying to maintain your voice when there’s a million more radical, more obnoxious voices trying to speak over you.”

The British-born, Canadian-raised singer-songwriter co-produced Strange Birds with his friend, Byron Wong in Toronto and cut all 11 songs with his band – Chris Taylor-Munro (drums), Kevin Young (keyboards), Julie Galios (vocals, bass), and Jonathan Gallivan (guitar) – which he says was instrumental in plotting the sound.

“This record is different because I had the band coming down [to New York] every month to play the songs, rehearse, write and everything like that,” says Usher. “The craziest thing is that I’m in an apartment in New York and we can actually rehearse in the apartment,” he says laughing. “I don’t know what it is about my building, but the (people) have all been in the East Village for a long time and they’re pretty chilled.”For about a year, starting in 2005, Usher and the band tested out many of the new material live at limited-capacity shows at Pianos and The Rockwood Music Hall in New York. He initially thought the songs would take on that kind of intimate folk vibe. “With this record, the process was completely different than other records,” says Usher. Unlike his typical process of writing songs and hitting the studio to figure out the arrangements, with this record Usher wrote the song and then brought the band to New York once every six weeks to play.

“When I had the guys coming down to New York, I was telling Jonathan, ‘Get an acoustic guitar, bring it down,’ and it started out with Chris playing with brushes and now it’s almost all sticks. So it’s changed a lot that way. It was going a certain direction and it flipped around the other direction. It started out as a very folky record, and slowly it (got) heavier, bigger and electric.”
Usher then came up to Toronto to record at Wong’s condo studio, and the two of them went to Los Angeles to mix the album with Brian Malouf (Pink, Michael Jackson, Madonna).

With the album coming out, Usher is back in T.O. again, housing with Young, his long-time bandmate from his old band Moist. “I always stay with Kevin,” says Usher. “Kevin and I have lived together on the road for 15 years so that’s what I do. I’ve got my own room there.”

Mar.15, St. Catherines, ON, Brock Centre For The Arts