When Michelle Obama Speaks, We Take A Lot of Notes 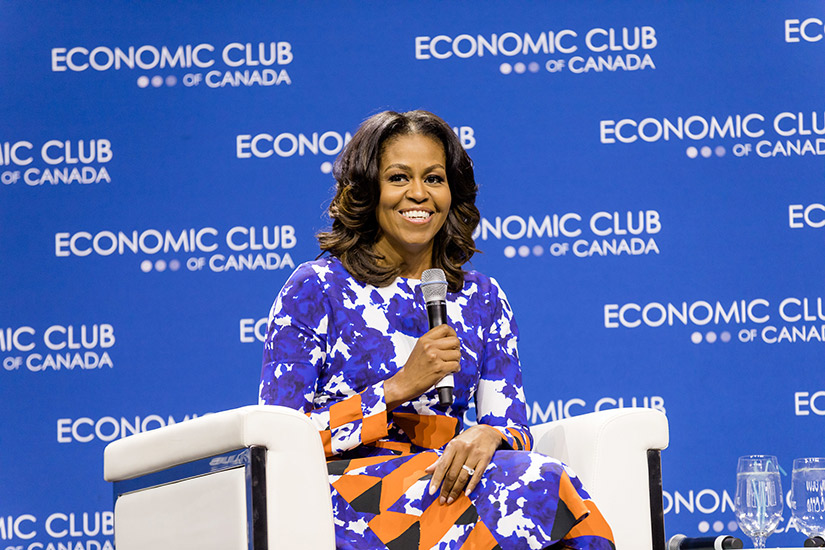 You have to keep yourself in the race,” says former U.S. First Lady Michelle Obama. She’s speaking to the rapt, largely female crowd at the Economic Club of Canada/Plan International Advancing Women & Girls to Change the World event in Toronto, and she wants them to advocate more for themselves in the classroom and at work. “Here’s what women do many times in meetings,” she continues. “There’s the meeting going on, then there’s a separate one going on in our heads. And the meeting in our heads has us filtering ‘Let me think before I ask that question’ or ‘What if I’m wrong?’ or ‘Am I talking too much?’ We’re all filtering ourselves and not engaging because we are hesitating. Men talk and talk and talk even if they don’t know the answers, and you’re thinking ‘Wow, he’s really making a good point.’ And usually, they’re not.” [Laughs]

Jokes aside, Obama goes on to stress the importance of women not only taking risks but also being willing to fail. “People who are successful didn’t get there because they didn’t make mistakes; it’s because of how they recovered from those mistakes,” she says, adding that if we don’t share the stories of how we got to be who we are, no one else can learn from them—or understand that there is no one, singular way to succeed. “The ability to continue to get up and not be embarrassed by failures but to own them and learn from them—it’s that resilience that makes me who I am. Not the degrees, not the schools I went to, not the titles. It’s my ability to bounce back again and again.”

Obama also addressed the difficult experience of how those closest to you can sometimes oppose or even derail your desire to change. She grew up on the south side of Chicago and says she knows what it’s like to navigate two worlds—those of “getting to school without getting your butt kicked” and “being smart in school without putting some other kid down unintentionally.” When you’re trying to succeed, she explains, there’s a whole different language, attitude and behaviour to adopt. But with this can come resistance from family members on your journey. “You have to realize that what is behind all of that ‘holding back’ [behaviour] is fear,” she says. “I was fortunate that my parents pushed us beyond their fear, but there are a lot of kids who have families who are afraid of what that next step may mean and what it means when you push beyond what they can offer you. That fear is real, and a lot of it is love—it’s just the unknown. From your community it can be ‘If you go off and do these things, will you forget about me? Will you come back and help? What does it mean for me?’ But you can’t make yourself small because other people don’t know how to be big.”