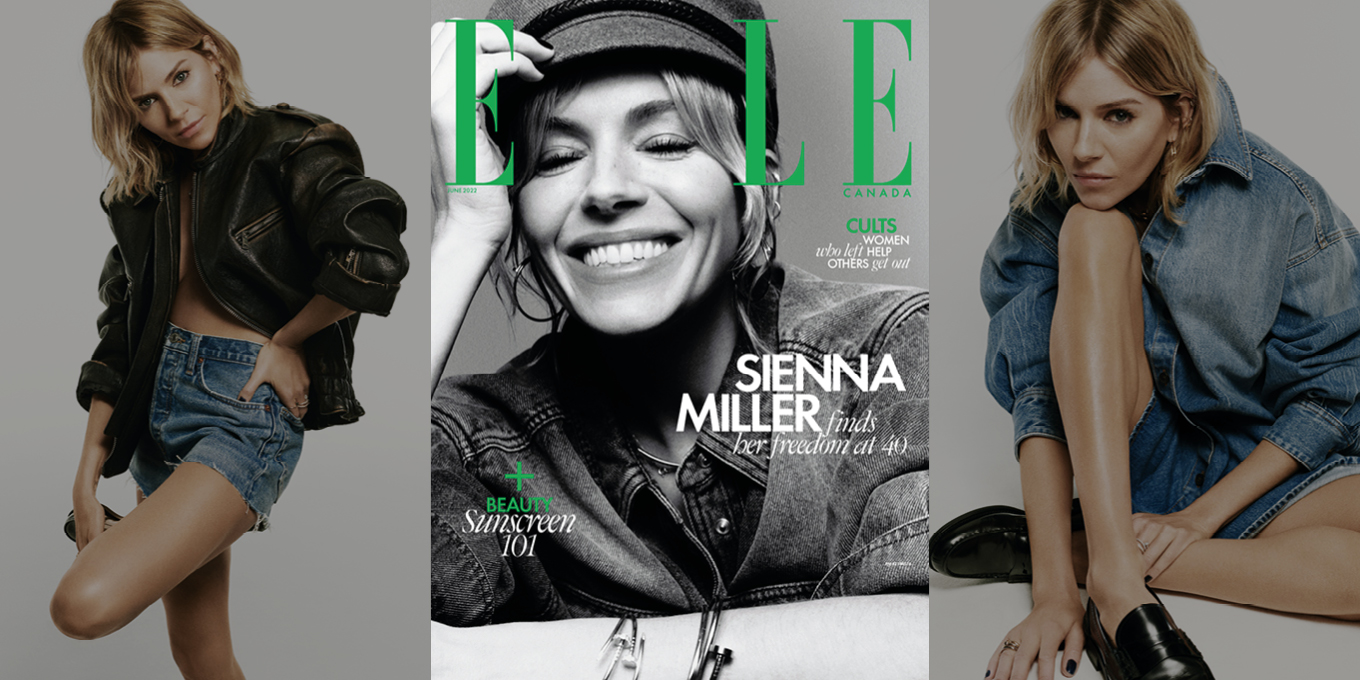 We’re excited to unveil the June issue of ELLE Canada featuring actress Sienna Miller. The star talks openly about navigating familiar ground in the new Netflix drama Anatomy of a Scandal, as her character is thrust into a similar kind of toxic tabloid culture Miller faced throughout her 20s. “I can’t quite believe that it all happened,” she says in the candid interview. “The chaos of that entire decade is so far removed from my life now.” In particular, turning 40 has felt like starting a decidedly new chapter for this hard-working mother, who recently moved from London to New York with her nine-year-old daughter. “I feel more in control of my life,” she says. “I know what matters to me: my friendships, my child and, ultimately, trying to be happy. That really is enough.”

Skincare is front and centre in this edition — with a few twists. To kick off summer, we offer a sun-protection refresh on everything from UV basics to reapplication. We also look at whether increasingly popular skincare products for vulvas and vaginas actually work, and we explore a new trend toward creating fragrances that emulate the scent of skin. Plus, Dakota Fanning shares her morning beauty regimen and bedtime rituals, and the co-founders of skincare brand Youth to the People reflect on their commitment to sustainable products and the idea that youth is more than skin deep.

In fashion, the scholastic, bookish vibe of preppy style is making a major comeback, but this time with subversive undertones and major sex appeal. French jewellery prototypist Marine Billet gives us a behind-the-scenes look at how she makes some of high fashion’s most avant-garde designs. And sisters Myriam and Romy Belzile-Maguire, founders of the Montreal-based brand Maguire, share their goal of making luxury footwear friendly with ethical craftsmanship, transparency and an accessible shopping environment.

Loss makes a few appearances in this issue. Singer-songwriter Angel Olsen opens up about how her latest album, Big Time, draws on all sorts of grief, including the deaths of her parents and the end of her first queer relationship. One of our writers reflects on the role of transient friendships in our lives as she mourns the loss of one such relationship. And actress Minnie Driver’s new memoir, Managing Expectation, is filled with deeply personal, intimate snapshots of her life, including the last few days she spent with her mother, who was diagnosed with terminal cancer.

This edition runs the gamut of stories about empowerment. We sit down with four female Indigenous leaders who are using tourism as a way to shape a new narrative for Indigenous women in Western Canada. We explore how kink is stepping out of the shadows and pushing our definition of sex beyond being just a one-way street to orgasm. Toronto’s Mouna Traoré shares her experience as part of the predominantly Black cast and crew of The Porter, a show about unwavering ambition and Black life. And British actress Indira Varma, who takes a leading role in the Star Wars miniseries Obi-Wan Kenobi, opens up about her early introduction to the arts and navigating the industry as a woman of Indian descent.

Finally, we get serious with a look at a new media movement centred around giving a voice to cult survivors, allowing them to share their experiences and educate others. Readers will also get to meet journalist Zahra Joya and non-profit founder Pashtana Durrani, two Afghan women who are fighting against repression despite imminent danger in an attempt to reclaim their rights and those of others.

The June issue of ELLE Canada will hit newsstands and Apple News+ on May 16, 2022.