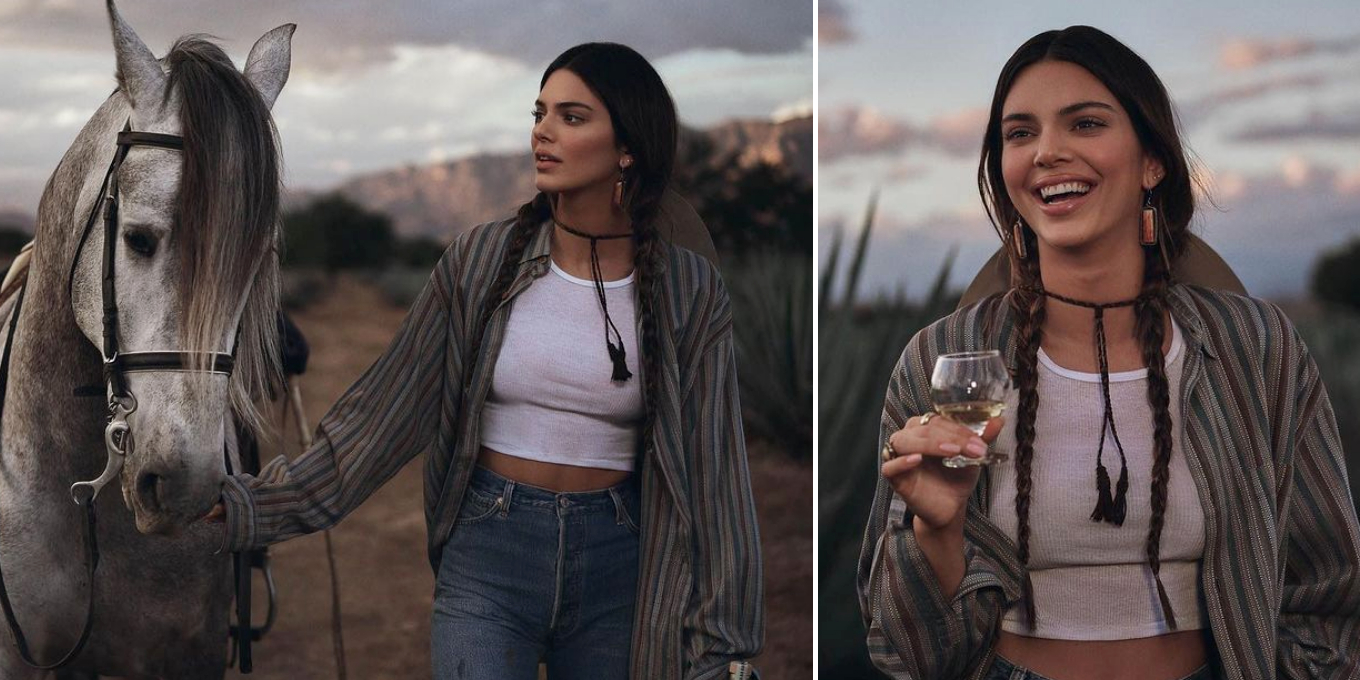 It has been three months since Kendall Jenner announced the launch of her tequila company, ‘818’. While some applauded her ability to secretly launch an award-winning company, others called out the 25-year-old’s appropriation of Mexican culture. And now, the latter has struck again.

To honour her tequila brand‘s upcoming debut in the United States, Jenner shared a campaign that she had shot from an agave farm in Jalisco, Mexico, that has raised a lot of red flags online.

On Instagram, Jenner posted the controversial shots from the ad campaign, saying, “What an incredible experience I have had thus far, learning about this beautiful place [Jalisco, Mexico], its beautiful culture, and the beautiful people!”

In the imagery, Jenner can be seen riding a horse through rows of agave plants, another that saw the model sipping her tequila on the back of a pickup truck, several photos of agave farmers and another of agave cooking in an oven.

Aside from the controversial imagery, it was Jenner’s attire that was the most cause for concern. Viewers online pointed out her choice to wear an outfit and hairstyle that is traditionally associated with Mexican culture, when Jenner is, well, not Mexican.

Sporting jeans, a cowboy hat and a loose cotton shirt over a tank top, many called out the look as cultural appropriation or as an attempt at ‘migrant chic’. Given that Jenner is American, many implied that the campaign—and tequila brand itself—are capitalizing on stereotypes typically associated with farmers in Mexico.

With others even pointed out her use of a sepia-type filter on the imagery, since American media also tends to do so when stereotypically depicting Mexico.

While others have taken to 818’s Instagram page to ask Jenner how much the agave plant farmers were paid for their inclusion in the campaign and their work to harvest the agave she uses for her tequila.

YOU'VE GOT TO BE KIDDING ME…..leave it to Kendall to be as tone deaf as possible, this is so offensive. Modeling that chic migrant worker look for her tequila brand, watch her cry and say she didn't know later on for the 100th time 🙄😠 pic.twitter.com/7n4VypvSVv

I can see the pain in this old mans eyes Kendall Jenner pic.twitter.com/FRNnL2iaF9

Many families, specially in Jalisco, Mexico, produce tequila for Mexican brands or even they have their own small businesses of tequila. Kendall Jenner coming to Jalisco and starting her tequila is making that many families to lose their job to big names like her.

Kendall Jenner starting a tequila brand, with zero knowledge on Mexican culture and calling it “818 tequila” is GENTRIFICATION. The 818 does not claim Calabasas. What about those smaller, family owned Mexican tequila/mezcal brands? They deserve the hype & support.

As many may know, tequila is a significant part of Mexico and its culture, specifically the town of Jalisco, which many consider the birthplace of tequila. And given its strong ties to the culture, it makes sense for many to take offence when celebrities of non-Mexican heritage take to creating tequila companies, due to their potential exploitation of workers and for sending their millions of followers to their brands over locally owned distilleries.

As for 818, its website clarifies that they “work closely with local, family-owned farms in Jalisco, Mexico”, however, their focus on sustainability seems to be their main focus over addressing the ethics behind their harvesting. Currently, Jenner is yet to publicly responded to criticisms of 818 and instead, has chosen to turn off her comments on Instagram.

Something about Kendall Jenner making tequila rubs me the wrong way..like the idea of white celebrities taking from local Mexican artisans and profiting off our traditions and agricultural business yet only visit Cabos and Puerto Vallarta for vacation spots…

God somethings never change… 2017 vs 2021 it’s funny because remember Kendall cried after the backlash from the Pepsi commercial if there was no backlash she wouldn’t have cared this is just disgusting brown face, culture appropriation to a whole other level 🤯 pic.twitter.com/nTkxiVZroy

Unfortunately, the Kardashian-Jenners are more than familiar with tone-deaf moments and cultural appropriation claims.

From Jenner’s controversial Pepsi commercial—that saw her stop police brutality amidst the Black Lives Matter movement by handing an officer a can of Pepsi—to Kim Kardashian’s frequent wearing of Fulani braids and Jenner’s 2018 photoshoot where she wore an Afro hairstyle, the family continues to be caught up in accusations, most of which are sans an apology.

Either way, gentrification of migrant workers for profit is far from acceptable, so here’s hoping that future campaigns from 818 are sensitive to those concerns.