The Canadian Women Musicians You Need to Know 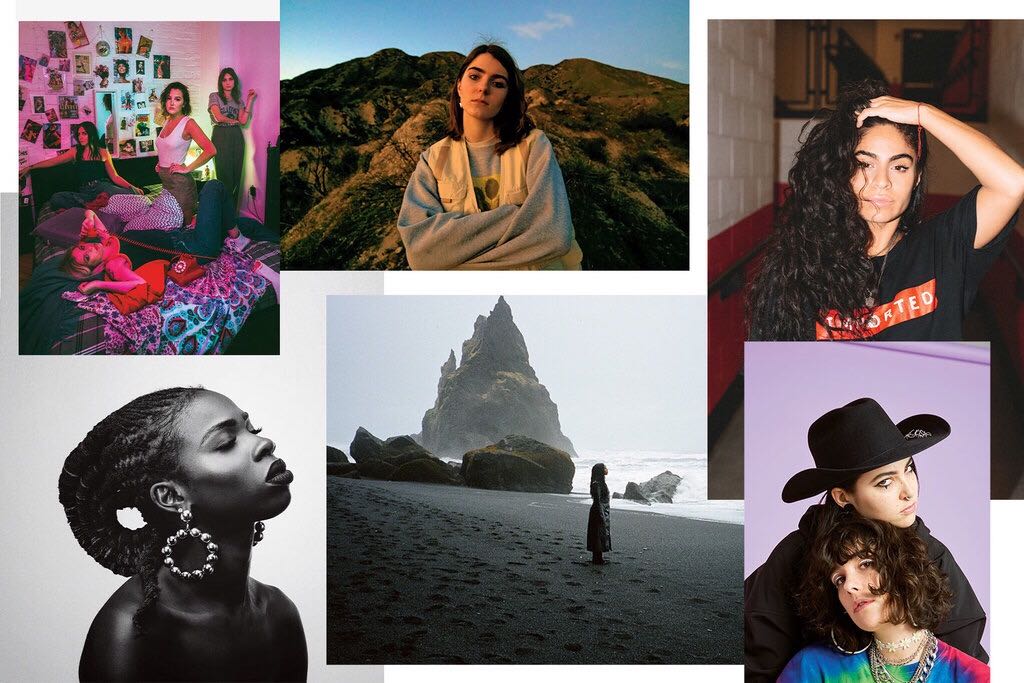 True story: Pretty much every artist we spoke to for this music special name-dropped Jessie Reyez as someone who’s inspiring them. Indeed, it’s hard not to be left starry-eyed by the 29-year-old Brampton, Ont., native whose delightfully melancholy voice and give-us-all-the-feels lyrics have earned her international acclaim. The “Figures” singer has collaborated with the likes of Eminem, Sam Smith and Daniel Caesar and, most recently, 6LACK, on the new single “Imported.” Reyez is also all about encouraging the next gen of Canadian voices; she hosted a songwriting workshop in January after asking fledgling singers to audition for her via Instagram. She also had a cameo in the Netflix movie Someone Great.

Writer’s room “How I write songs is basically just a vibe. Sometimes inspiration hits like an open faucet. Sometimes it feels like a waterfall. And then there are times when it feels like that faucet is really tight and you’re only get- ting drops. When it drips, I need to write things down and build it a little more. I always write from real-life experience. I feel like it’s important to pull from truth so that songs resonate.”

Future EGOT? “I see acting in my future but not for a while. I want to make sure that I master music be- fore I move on to another medium.”

The last song she listened to? “‘Imported’ by me, featuring 6LACK. Yes, this is a plug!”

On the morning we speak to Amaal, the video for her latest single, the dreamy slow jam,“Coming & Going,”has just been released. “I think I watched it, like, 400 times,” the 29-year-old laughs. “I’m on a bit of a happy high because the response has been really great.” This latest work, which appears on her upcoming EP Black Dove (out this summer), marks a shift to a raw, more personal tone from the Toronto-based R&B singer who, when she was a kid, moved with her family to Canada from Somalia in the ’90s. When she was a teen, she started writing songs during a trip back home—without any formal voice training, mind you. At first, they were mostly about her experience as a refugee (including the viral hit “Mufasa”) and navigating the music industry as a Muslim woman. Crucial subjects, to be sure, but, she says, as the years passed, “I felt like I was writing the same song.” One thing’s for sure: Amaal’s got plenty to say and she’s just getting started. “Women have always had amazing stories to tell; we’ve always had a voice,” she says. “I think when you see another woman actually doing it, it has a domino effect.”

While you were learning your times tables, Toronto-based-via-Germany bülow (née Megan Bülow) was writing her first song. At 11, she picked up a guitar, and by 18, she had released her first hit, the pop zinger “Not a Love Song.” This summer, the singer— whose EP Crystalline came out in April—is hitting the festival circuit with gigs at Osheaga and Lollapalooza.

The Hustler “I’m always thinking ‘How can I improve?’ I think that’s what’s unique about musicians: We have a greed and motivation for our art that never sleep. Sleep is for the weak!”

SK8R Girl “Avril Lavigne’s Let Go was my first album—actually it was my sister’s, but I stole it from her. My first concert was German singer Nena.”

Collaborate, not compete “It can be intimidating in a male-dominated industry, but female artists just have to keep giving one another that push and support.”

Montreal-based electro-pop duo Milk & Bone (made up of Laurence Lafond Beaulne and Camille Poliquin) came together kind of by accident. “We were touring with another artist and sharing hotel rooms; we got so close that we just started to write together for something to do,” Poliquin, 26, tells us. They wrapped their first album eight months later. Up this summer? Their latest EP, Dive, and then it’s back out on the festival circuit.

Career goals “I used to listen to Céline Dion and be like ‘Oh, my God, this would be the absolute best.’ But it’s like saying you want to be an astronaut. You never think it’s actually possible because no one tells you that music is a viable career.”

Dream Team “We love to help each other write, and since we know each other so well, it’s easy. It really feels like we’re just two heads coming together as one.”

Stage Style “We go all out. We like challenging each other to go further and further for every show. Lo is more out there than me—she’s super-colourful. I always wear black.”

A lot has happened since Edmonton native Ruth B. went viral on Vine (R.I.P) in 2014, singing what would become her breakout single, “Lost Boy.” The singer, who turns 24 in July and recently moved to New York, now has an album and two EPs under her belt, including this spring’s intimate Maybe I’ll Find You Again.

If at first you don’t succeed There are days when I want to give up or not write, but they typically happen to be the days when I write my best songs. Even when you’re frustrated, you should never just throw it away.”

Music Lessons “We need more encouragement of art and music in schools. It’s really important that kids see them as tangible things. Growing up, I thought this wasn’t possible because of where I was from; I felt like no one would ever hear me.”

Hometown heroes “I love Daniel Caesar; he’s the best. And I love The Weeknd, Drake, Alessia [Cara] and Shawn [Mendes]— everybody’s so amazing.”

The music industry isn’t exactly known for being inclusive and supportive of women, and that extends to the male-dominated hip-hop genre. But rapper/producer Haviah Mighty, 26, isn’t letting that stop her—in fact, that challenge has partly inspired her long-awaited new album, 13th Floor. “I champion those differences that are mine,” says Mighty, who is also a member of the all-female Toronto hip-hop group The Sorority.“I’m proud to be black, I’m proud to be a woman and I’m proud to be able to rap and do all the things I do.” While Mighty, who is based in Brampton, Ont., grew up surrounded by music (her sisters played the piano, and she took singing lessons), surprisingly, she never considered it a viable career. It wasn’t until 2016, when a clip of her free-styling (with Keysha Freshh and Lex Leosis, now fellow members of The Sorority) for International Women’s Day went viral, that she realized she could do what she loved—and make a living from it. She released her critically acclaimed EP Flower City in 2017 and was one of the winners of the Allan Slaight Juno Master Class (recognizing emerging young artists) last year. Up next? Touring Canada after recently quitting her retail job at music store Long & McQuade to pursue music full-time, nbd.

When Elton John counts himself among your fans, you know you must be doing something right. But how did Toronto indie-rock band The Beaches—made up of sisters Jordan and Kylie Miller (vocalist/bassist and guitarist, respectively), Leandra Earl (keyboardist) and Eliza Enman-McDaniel (drummer)—work its way up to Sir Elton’s acclaim? With homegrown support, for one thing. Like when Metric’s Emily Haines suggested she co-produce their first album, 2017’s Late Show. “We had just expected to go and get coffee with her and get some advice about being female in the rock industry,” says Jordan, adding that they hope to offer up-and-coming bands the same support when they “gain some success.” With a Juno Award and their recently released EP, The Professional, under their (probably vintage) belts, they’re already there. Just ask Elton.