Take That kicked off their Wembley Stadium concerts with a stunning show last night (30.06.11), the first of a record-breaking eight gigs. 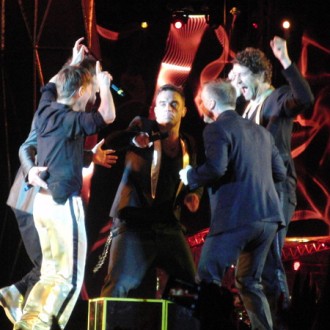 Take That kicked off their Wembley Stadium concerts with a stunning show last night (30.06.11).

The group – made up of Gary Barlow, Robbie Williams, Mark Owen, Jason Orange and Howard Donald – are playing a record-breaking eight gigs at the prestigious London venue as part of their ‘Progress Live’ tour, their first as a five-piece since Robbie quit in 1995.

The show opened with Gary, Mark, Jason and Howard playing the hit songs from their two albums as a four-piece, ‘Beautiful World’ and ‘The Circus’, which included ‘Greatest Day’, ‘Rule The World’, ‘Patience’ and ‘Shine’ as well as leading the crowd in a rendition of the Great British national anthem ‘God Save The Queen’.

As they went off stage, Robbie appeared and treated the screaming crowds to songs from his solo career, starting with ‘Let Me Entertain You’ and finishing with his most famous song, ‘Angels’, which left him overcome with emotion.

The group then all appeared on stage together as they sang hit single ‘The Flood’ and other songs from their ‘Progress’ album, before thrilling the audience with some of their biggest ever hits from their early days, including ‘Back For Good’, ‘Pray’, ‘Relight My Fire’ and ‘Never Forget’.