N-Dubz will split within two years, according to the group's lead rapper Dappy. 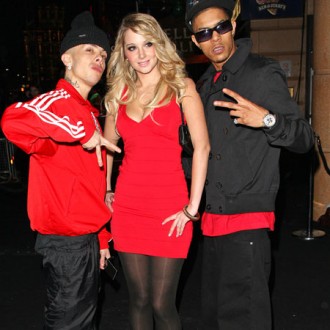 N-Dubz will split within two years, according to Dappy.

The ‘Girls’ group went on hiatus earlier this year so the members could pursue individual projects, but rapper Dappy sees a permanent end to the group by 2013.

He told the Daily Mirror newspaper: “The band is definitely going to quiet down for the next year-and-a-half to two years. We may release some stuff every six months but it will definitely be quieter. Then, at the end of that period, we will do a ‘Greatest Hits’ or ‘Best of N-Dubz’. Then that’ll be it: finished.”

Dappy is starting a solo career and preparing to release his first single ‘No Regrets’, while singer Tulisa has been recruited as a judge on UK TV show ‘The X Factor’. Third member, Fazer, has said he wants to produce songs for other people and has submitted a track to Katy Perry.

Without his bandmates, Dappy is also planning some high profile collaborations, including with Jay-Z and Kanye West producer No I.D.

He added: “On my album I’m trying to get Rihanna. She knows about what I’m doing and she’s heard it. Also, me and The Wanted are definitely doing a single together and I’m also working with No I.D.”