Leonard Cohen feels like he's ''scraping the bottom of the barrel'' when he is working on his compositions. 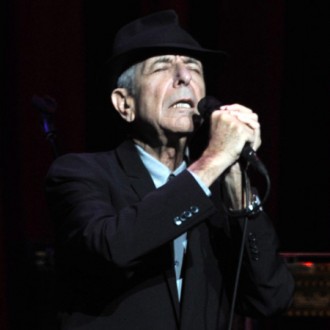 Leonard Cohen feels like he’s “scraping the bottom of the barrel” when writing songs.

‘The Stranger Song’ singer is preparing to release his 12th album, ‘Old Ideas’, and admitted he finds the process of writing new tracks difficult and time consuming.

He said: “I never had a strategy, I always felt I was kind of scraping the bottom of the barrel just trying to get a song together. I never had the sense that I was standing in front of a buffet table, with a multitude of choices.

“There are people who work from a sense of great abundance, and I’d love to be one of them, but I’m not.”

77-year-old Leonard – who reportedly took around a year to write his track ‘Hallelujah’ – also told how he worries about losing the notebooks which he uses to plans his compositions.

He added: “I live in deep fear of losing a notebook. I’ve lost a lot of them – there were some masterpieces.”

Speaking at a conference in London, the legendarily low-voiced crooner also said his tones have actually got deeper since he gave up smoking, the opposite of what he expected.

He joked: “It’s what happens when you give up cigarettes, contrary to public opinion. I thought my voice would rise a soprano. It’s not going that direction.