Lemmy gets his warts licked

Motorhead singer Lemmy gets groupies who want to suck his famous warts, and despite his advancing years he is still a lothario. 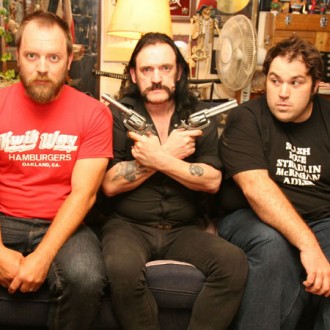 Motorhead singer Lemmy has groupies who want to suck his warts

The 65-year-old heavy metal frontman famously has two large warts on his left cheek – which some crazed fans are desperate to touch.

Filmmaker Wes Orshoski – who has made a documentary, titled ‘Lemmy’ about the star – told BANG Showbiz: “We met this girl, this groupie in Philadelphia on the Metal Masters tour, she was showing her boobs to everyone, and she told me, she sucked on his warts. She was very pleased about it.

“I’ve never touched his warts, at least with any intention of doing so.”

The co-director, who made the film alongside Greg Olliver, also told how despite being an older gentleman, the ‘Overkill’ rocker still doesn’t have any trouble getting young groupies.

Greg said: “Many, many times did he disappear with women. There was something we wanted to film with him on our last day in Moscow.

“In the crowd there’s always like one beautiful girl in the crowd vying for Lemmy’s attention. This one was deadly gorgeous, super hot. We just wanted to film one little thing backstage with him after, and his assistant came out, and he was like, ‘oh, no – no, no, no boys; that girl’s in there now and you are not going in there!

“Three hours later they left and she had a weird look on her face and so did he. He still gets the girls.”

Wes added: “I think when he wants to he takes a girl home, he’s a 65 year old guy, some nights he just wants to read his book, but he still gets loads of girls.”

‘Lemmy’ is released in UK cinemas from December 3 and will be out on DVD from January 24th.