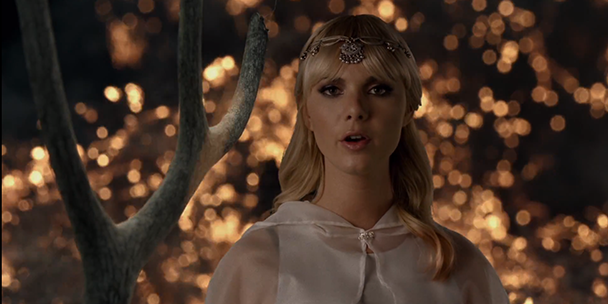 Kandle Osborne’s cool-girl rock has been on ELLE‘s radar since we heard her haunting debut album, In Flames, last year. This summer (after her Juno nomination, before some majorly heavy touring), this bright light on Canada’s alt scene is back with an epic track featuring fellow indie darling Coeur de Pirate.

We asked Kandle to give us the inside scoop on the trippy video for “Baby,” streaming excusively on ELLE Canada this week. By the way: It took 9 months and over 1000 hours to complete!

What inspired this video?
This is my second video with director David Valliquette and every time he throws an idea at me, I love it! He wanted to create a dreamy psychedelic Never Ending Story-type world where I was a princess consumed by loneliness watching my kingdom around me fade away and die.

What is your favourite thing about the video?
Never Ending Story was my favourite movie as a child and I grew up fantasizing about being the princess and having a giant white flying dog! Thanks to designer Yasmine Wasfy, my costume came to life. Unfortunately, I couldn’t fly out my giant white dog to the set but Sam Goldberg and his guitar made it instead!

Talk us through the creative process!
For this, Kandle handed it over to director Valliquette, who had this to say… “The idea was to shoot a bunch of backgrounds, found in nature and/or recreated in a miniature set keeping in mind a possible action that a “miniature Kandle” could be doing throughout these “worlds.” I used a simple photo cut-out that I roughly animated to visualize Kandle’s position that I would later shoot on a green screen.”

And now, the video!