Everything That Happened at the 2018 VMAs

Including a J.Lo medley and performances from Ariana Grande and Nicki Minaj. 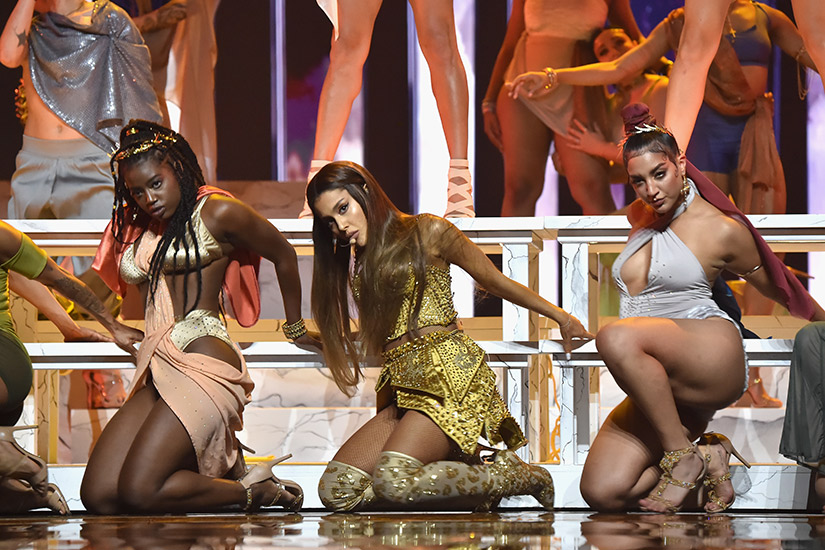 The 2018 MTV Video Music Awards took over NYC’s Radio City Music Hall last night to give out moon people statuettes to the year’s best music videos. Here’s everything that went down at the  35th (!!) annual show. (We feel old.)

After dropping Queen earlier this month, Nicki Minaj returned to the VMAs for a regal performance. Literally—there was a throne. The rapper actually pulled attention away from the main venue for a few minutes, taking the stage at the Oculus in downtown NYC with a medley of songs, including “Majesty,” and “Barbie Dreams.” Earlier in the night, Minaj won Best Hip-Hop video for “Chun-Li.”

Reliving @NICKIMINAJ‘s #VMA performance for the rest of foreverrrrr ? pic.twitter.com/1eNufUDAMZ

Team Canada killed it on the show. Shawn Mendes opened the ceremony with a rousing performance of his hit “In My Blood” (which he wrote about his struggles with anxiety). Later on, Toronto-native Jessie Reyez impressed with her stunning performance of “Apple Juice.”

Hitting the red carpet with fiancé Pete Davidson for the very first time, Ariana Grande—whose “No Tears Left to Cry” took home best pop video—made sure her appearance would be one to remember. The pop star took the stage with more than 50 women to perform a Last Supper-themed version of her latest hit “God is a Woman.” And Grande ended on the sweetest note, brining out her grandmother, mom and aunt out on stage.

Jennifer Lopez received this year’s Video Vanguard Award and proved she earned it with a 10-minute show-stopping medley of her biggest hits, including “Waiting for Tonight,” “Jenny From the Block” and “Dinero.” Moments later, she was back on stage to deliver a touching acceptance speech, thanking the people she’s worked with, her family and BF Alex Rodriguez. “I grew up on MTV,” she said. “And this is really, like, a tremendous honour for me. It has been an incredible journey of dreaming my wildest dreams and then kind of watching them come true.”

Camila Cabello took home two Moon People as a solo artist. The former Fifth Harmony member received Video of the Year for her hit “Havana” and beat out Ariana Grande, Bruno Mars, Drake, Cardi B and Post Malone for Artist of the Year. “The best night ever,” the singer tweeted out after her big wins.

Can we talk about @Camila_Cabello‘s speech? GIRL POWER! #VMAs pic.twitter.com/5xULTkp5fR

After Aretha Franklin passed away last week, VMA viewers were wondering how the show would honour the legendary musician’s legacy. Pop icon Madonna was on hand for the tribute. “Aretha Louise Franklin changed the course my life,” the singer began. But what followed was a lengthy anecdote that had little to do with Franklin and was instead focused mainly on Madonna’s career failures and successes. Fans on social media immediately pointed out the discrepancy.